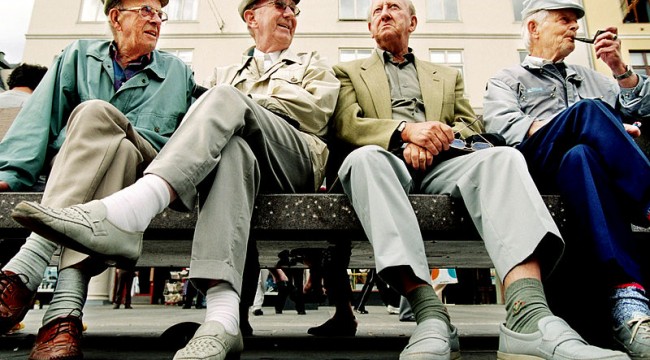 The Coming Era of Pension Poverty

The core problem with pension plans is that the promises were issued without regard for the revenues needed to pay the promises.

Lulled by 60 years of global growth since 1945, those in charge of entitlements and publicly funded pensions assumed that “growth”– of GDP, tax revenues, employment and everything else–would always rise faster than the costs of the promised pensions and entitlements.

But due to demographics and a structurally stagnant economy, entitlements and pension costs are rising at a much faster rate than the revenues needed to pay the promised benefits. Two charts (courtesy of Market Daily Briefing) tell the demographic story:

As the 60+ million baby boom began qualifying for Social Security and Medicare entitlements, the percentage of beneficiaries rose quickly from a decades-long level of about 16% of the total population to 18.5%.

This might not seem like much, but what’s troubling is the steep rise in the number of beneficiaries while the number of full-time workers who pay the vast majority of the income taxes has remained stagnant: 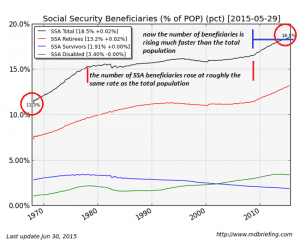 Federal social spending (entitlements) has almost tripled from 5% of GDP to 14% while federal tax revenues/spending have remained range-bound as a percentage of GDP.

In other words, social spending is soaring as a percentage of the economy (GDP) while revenues to support that spending are limited by the slow-growing economy and the correlation between high tax rates and recessions. 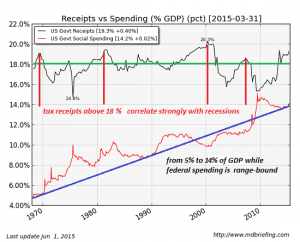 The other structural headwind is low investment returns in a zero-interest rate global economy. The only way to increase yields is to take on more risk, a strategy that has potentially catastrophic consequences: Pension Funds Are “Compromising Their Solvency” OECD Warns.

Any criticism of rapidly rising public pension costs quickly draws accusations of union-bashing, a favored propaganda technique to divert investigation of blatant abuse of the system.

Since I have cousins who have retired from California police and firefighter jobs, I know all the insider games and tricks that many public employees can use to boost their pensions and benefits.

The global economy is due for a recession and an extended period of slow growth/stagnation as the Great Deleveraging of credit/asset bubbles strips away phantom collateral and pops all the bubbles.

This global deleveraging will occur whether we like it or not, and refusing to consider massive losses in pension-fund owned assets and declining tax revenues will only lead to greater fiscal imbalances/crises down the road.

The private sector doesn’t offer tricks like doubling your overtime in your last year of service to plump up your pension, or getting cashed out of your sick leave and unused vacation time to the tune of hundreds of thousands of dollars.

In the real world, these benefits vanish if you don’t use them within the allotted time.

Promises made in flush times cannot be kept in lean times. Common sense suggests that public employee pension benefits should be tied to the revenues required to pay them and the rate of low-risk returns on pension funds.

If common-sense is “union bashing,” then we not only have a pension-funding problem, we have a propaganda problem.

Regardless of what was promised, what can’t be paid won’t be paid. The federal government can print money, but state and local governments cannot print money to pay soaring pension and healthcare costs. Push taxes and junk fees up enough and you will spark a taxpayer rebellion.

If you doubt this, check out the origins of Prop 13 limits on property taxes in California.

The reason why this is practical is the Social Security system is not open-ended like Medicare; costs can be fairly accurately predicted, and SSA pensions are limited.

In a deflationary $17 trillion economy, printing $1 trillion and distributing it to tens of millions of beneficiaries, most of whom paid SSA payroll taxes for decades, would not be enough to spark systemic inflation (The Federal Reserve, so desperate to generate inflation, should jump on the prospect of goosing some mild inflation via broad-based spending by tens of millions of households).

Assuming “growth” will fund all promised pensions and entitlements is magical thinking. We’re going to have to do better than indulge our Spoiled Brat Economy mindset because “we wuz promised.” What we were promised based on faulty assumptions, faulty projections and wishful thinking no longer matters.

Gordon T. Long and I discuss these systemic issues in a video program: