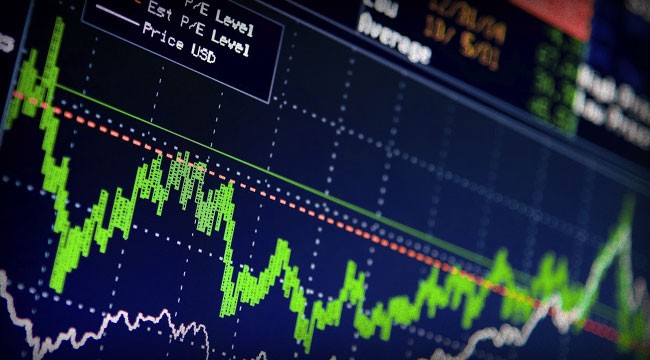 As Tax Collections Boom, Panic Now and Avoid The Rush

[This post is from Lee Adler. To discover more of his work and insights – visit Wall Street Examiner.]

Apparently, lots of people think that Donald Trump is making America great again. There’s a boom afoot. The Federal tax collection data for June tells us that animal spirits have returned. Data from the US Treasury’s Daily Treasury Statement showed that taxes zoomed higher virtually across the board in the final two thirds of the month, after a weak start.

Note that nonfarm payrolls data is collected early in the month, which was weak. The jobs report due out Friday should not reflect the strength over the last two thirds of the month.

Economic strength at this stage of the cycle is bearish. It will encourage the Federal Reserve to follow up on its plan to shrink its balance sheet. That is a real tightening that will impact both stock and bond prices.

This data suggests that the Fed will pull the punchbowl, and may do so more aggressively than expected. Markets top out when the economic news is good, because that’s when central bankers flip from dovish to hawkish.

The tax data is realtime, hard data. It gives us an edge. Economic data is lagged and manipulated. It will take another month, or several months, before the economic data reflects this strength. It will spook traders, who will sell the news in the expectation of Fed tightening. With the benefit of knowing that this is coming, we can move in advance of the crowd. As some of my more cynical trading friends would say, “Panic now and avoid the rush!

It could also be an opportunity to place judicious short positions on both individual industries and the broad market, when the charts present the appropriate patterns.

Meanwhile, the Treasury held $181 billion in cash at the end of June. That can tide it over through a couple of more months of deficits, now averaging $50-60 billion per month. Soon the US won’t be able to sell new debt as it bumps up against the debt ceiling, and it runs out of internal bookkeeping games. That would be a bullish factor for both bonds and stocks for the weeks where the debt ceiling actively prevents the Treasury from issuing new supply.

Experts suggest that the debt ceiling must be raised by October 2 when a big military pension fund payment comes due. The Federal government may then need to borrow as much as $200 billion over the course of October and November, with much of it loaded into early October. That’s likely to destabilize the markets.

The Treasury’s cash balances are extremely volatile. To get an idea of their relative level compare them to the same date last year. 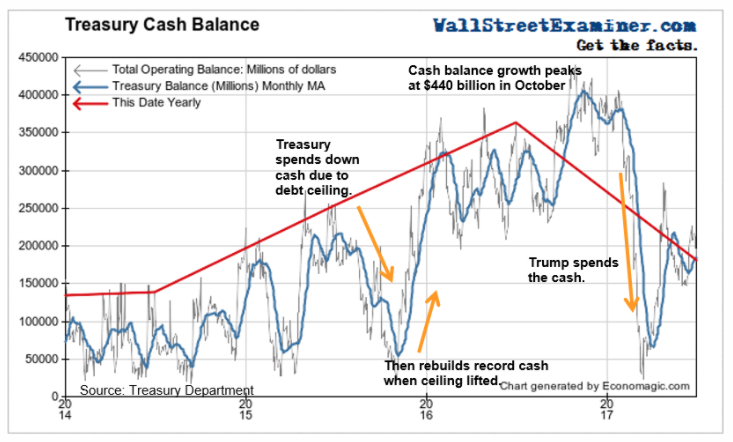 As of June 30, 2017, the Treasury’s cash balance was $181 billion. Cash levels get a boost in June from quarterly estimated taxes collected from individual non-withheld payers and corporations. Total cash at the end of June was $183 billion less than a year ago. That was less than half the level on June 30 last year.

When the debt ceiling finally forces the Treasury to stop borrowing, the government will then need to spend down its cash. Ironically, that will boost the economy and the markets, because the usual Treasury supply that absorbs the cash will not be present. Dealers and investors will need to redeploy their normal cash flow into other investments, which will boost prices, all else being equal.

Ultimately, I believe the debt ceiling will be raised and the government will return to the market. It will need to raise hundreds of billions of dollars to both repay the internal funds it raided and rebuild cash to normal levels. That will lead to a screaming reversal of the rallies in stocks and bonds. I would want to be out of the market before that happens.

Tax collections rebounded in June after soft collections in May. The nominal annual growth rate rose to 6% from 4.25%. If the usual 2-4 month oscillation in collections tops out here, it would be a second lower peak after a lower low. A technical analyst would see the beginnings of a downtrend. However, the longer term trend is still rising. There’s no sign of recession in the withholding data.

That’s bearish. It will encourage the Fed to stay on course in its determination to begin shrinking its balance sheet. Markets top out when the economic news is good because that’s when central banks “pull the punchbowl.” 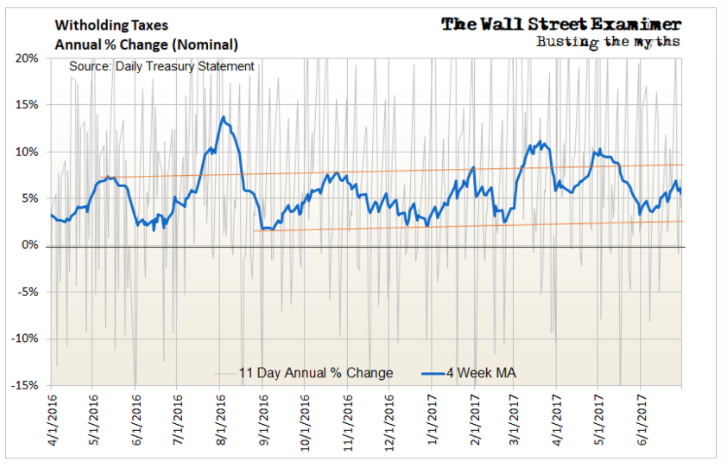 What does the current data tell us about Friday’s Nonfarm Payrolls release? Not much. The jobs number is sometimes wildly different from the direction of tax collections.

Tax data is clean, hard data, not manipulated by the statisticians. Jobs data isn’t clean. It isn’t hard data, and it is manipulated. Month to month it can’t be trusted. It is rife with errors. The seasonally adjusted headline number is often grossly misleading and massively revised over not just the next 2 months, but for the next 5 years as the benchmark data is adjusted to fit hard data accumulated after the fact.

The huge rise in May tax collections did not show up in the May jobs number. There’s a possibility that the June number will correct for that with a larger than expected increase, or conversely, May could be revised up sharply. That would lead to a disappointing June number.

Briefing.com reports that the average estimate of economists for June payrolls is 173,000. That’s a big jump from the May reported number, which should be revised up sharply. Tax collections in early June, when the jobs survey is taken, were quite weak. Logic would suggest that the jobs number after revision will surprise to the downside.

Whether that guess is right or wrong isn’t the point, however.

The point is to follow the tax data. All economic data will eventually be adjusted toward the trend that the taxes show is the actual trend of the economy right now.

Continued growth in tax collections will encourage the Fed to follow a course of tightening. That’s bearish.