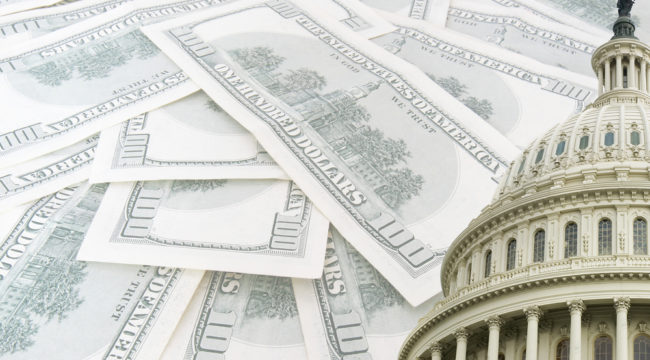 Coming Soon: The Mother Of All Debt Ceiling Crises

While the Imperial City is frozen in the Second Coming of Comey, it doesn’t mean that the Washington spending machine is on pause. In fact, the Treasury’s cash balance yesterday stood at only $153 billion — down by $130 billion just since the tax season peak was reached on April 25th.

Uncle Sam has been burning cash at a rate of $3.2 billion per calendar day since then and has no more room to borrow. That’s because the public debt ceiling is frozen at its March 15th level ($19.808 trillion) and the mavens at the Treasury Building have run out of borrowing gimmicks.

The countdown to the mother of all debt ceiling crises is now well underway — with the nation’s net debt sitting at $19.69 trillion. That figure, in turn, is up nearly $500 billion since FY 2016 ended on September 30 with the net debt at $19.22 trillion.

We itemize this torrent of red ink not merely to lament the nation’s dire fiscal plight, but to document a practical point. It will be impossible to pay Uncle Sam’s bills in full after Labor Day unless the debt ceiling is raised well the $20 trillion mark.

Exactly 36 years ago, Washington stood on another symbolic threshold — that is, raising the debt ceiling over the $1 trillion markfor the first time.

Back in October 1981, however, the Gipper was in the Oval Office at the peak of his popularity. He got the debt ceiling over the symbolic barrier at that time because he could still credibly promise that the budget would be balanced within three years. That was after his already enacted tax cuts became fully effective and the already enacted spending reductions took hold.

The nation’s balance sheet then was relatively pristine compared to what it is at present. Even at $1 trillion, the public debt amounted to just 30%of GDP — a far cry from the 106% ratio presently.

Before Capitol Hill gets bogged down in a sweaty August slog desperately looking for votes to raise the debt ceiling by several trillion dollars, it will have mid-year budget updates. They won’t be encouraging.

As my colleague Lee Adler has pointed out, Treasury tax collections have slowed to a crawl. Overall collections are barely even with prior year, and even withholding payments are now coming in at barely 2% on a year/year basis. That is far below the built-in spending growth rate of about 4% — and says nothing to the big increases for defense, law enforcement, border control and infrastructure being sought be the Trump White House.

The four week moving average of withholding collections — about as accurate a real time measure of the US economy as exists — is running below the average wage rate gain of about 2.6% per annum. That means real wage growth is turning negative — not accelerating like the “escape velocity” narrative being peddled by Wall Street. 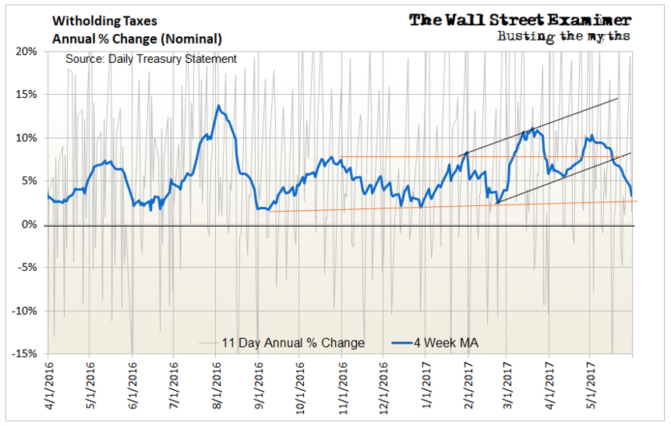 The Donald’s odds of leading Washington over the $20 trillion threshold are not even a tiny fraction of the Gipper’s at the time of the $1 trillionbarrier. The latter’s job approval rate was over 60%, whereas the Donald’s will soon dip into the low 30s as the RussiaGate prosecution gathers full force.

Back then it was still possible to pass a clean debt ceiling increase because there was always an end in sight. That is, the fiscal projections always showed a balanced budget or surplus a few years down the road that enabled the illusion of “one and done.”

No more. There is $10 trillion of new deficits built-in over the next decade — even with the Congressional Budget Office’s (CBO) rosy scenario economic forecast, and the deficit path widens, rather than narrows, over the ten year period. By 2027, in fact, the CBO baseline deficit is back above 5% of GDP.

The long and short of it is straightforward. The Democrats are not about to bail-out the Donald when they believe they have him on the ropes. At the same time, there is no GOP majority for any meaningful deficit reduction plan that could be attached to a debt ceiling increase bill as a legislative quid pro quo.

When the Senate GOP committee now working on an alternative health care bill reaches a consensus — if it ever does — there will be virtually no Medicaid cuts left. The so-called moderates have insisted that the Obamacare expansion must stay in place at least for the next five years or no dice.

At the same time, the Donald has boxed himself in with his reckless promise to ring-fence Medicare and Social Security. But when you set those two giant entitlements aside, along with Medicaid, you have taken $2 trillion per year off the table; and that quickly mushrooms to nearly $2.5 trillion per year when you add in $200 billionfor Veterans, the earned income tax credit and retirement checks for former military and civilian employees of the Federal government.

Yes, the Congressional GOP could perhaps agree to a 10% cut ($7 billion) in the $70 billionfood stamp program and a few billion more from some of the lesser low-income entitlements. But self-evidently that’s a rounding error in the scheme of things.

So when foreseen is not a tale of a Trump Fiscal Stimulus, but a Fiscal Bloodbath, take it to mean just that. And unlike the saves which were put together at the 11th hour in August 2011 and October 2015 by President Obama and Speaker Boehner, this time there will be absolute legislative paralysis.

It seems abundantly clear that Speaker Ryan is not ready to quit, and the Freedom Caucus has no intention of voting for a so-called “clean” debt ceiling increase.

Instead, Washington is heading for the unthinkable. That is, the need for the US Treasury to prioritize and allocate spending based on the available inflow of revenues.

That will come as a giant shock to those on Wall Street who fail to understand that Washington is in the midst of triggering the 25th amendment, and that the system will soon be ungovernable.

The prospect of allocation will also mean that debt service, social security checks, military expenditures, law enforcement, Federal payrolls and other high priority payments can be met from current receipts for an extended period of time, thereby prolonging the stalemate even further.

So the Wall Street casino may well shrug off the Comey hearing on the grounds that he did not deliver a red hot smoking gun after all.

But that will prove to be just one more chance to get out of harm’s way. What comes next is a debt ceiling Fiscal Bloodbath that will remove all doubt.