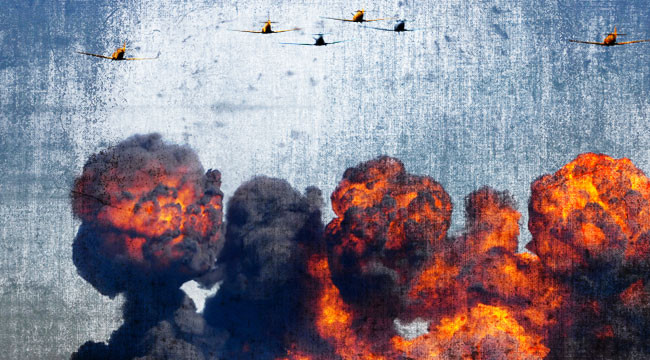 Syria and the Perpetual War Economy

Whether you agree or not that the U.S. ought to strike Syria, there is one reason it will: Because it has to. (Indeed, the bombing may already have started by the time you read this.)

Perpetual war is one of the pillars of the US economy.

According to the Mercatus Center, the U.S. spends more on its military than the next fourteen biggest spenders combined and six times more than the #2, China. All by itself, America makes up 45% of all military spending on the planet. The U.S. guarantees the security of 28 nations and has over 600 overseas bases around the world. It is an Empire. And Empires eat and eat and eat…

Military spending makes up at least 20% of the U.S. budget — and that excludes benefits to veterans. Who can know, for sure, just how much private sector research and development actually funds war technology. (The so-called “military R&D complex.”) By some estimates, the private sector depends on 60% of its R&D funding from the military.

The point of all of this is to drive home the fact that the military-industrial complex in America is enormous. With money comes influence. For this reason, war will happen under whatever pretext to keep the money flowing. And when they run out of reasons for it abroad, they’ll turn it on the domestic population. (As has already happened with drones and proliferating SWAT teams, NSA surveillance, etc.)

Sadly, there were wise critics who saw all this long before it happened. The phrase, “permanent war economy” dates from 1944. It appeared in a paper by Walter Oakes. He predicted that more and more resources would be siphoned from the private sector and funneled to the military and its industrial allies. Oakes knew that the slush fund of war spending for WWII would not be so easily withdrawn.

WWII is a big hinge upon which the story turns. According to economist Kevin Carson (Organization Theory), government spending drove the plant and equipment stock of the country up 65% 1939 to 1945. Most of that went towards giant contractors who profited from the war.

This led many economists to predict another depression after the war. For example, the aircraft industry took heavy losses after 1945. Many players were on the verge of bankruptcy. They were saved by Truman’s orders for heavy bombers. In a sense, civilian jumbo jets are a spinoff of military technology.

Of course, the end of the Cold War did not bring a dismantling of the war apparatus. It found new enemies and new causes. Today, the unwinnable War on Terror virtually guarantees plenty of reasons for more military spending for years to come.

“It’s interesting to consider,” Carson writes, “how many segments of the economy have a guaranteed market for their output, or a ‘conscript clientele’ in place of willing consumers. The military-industrial complex is well known. But how about the state’s education and penal system? How about the automobile-trucking-highway complex, or the civil aviation complex?”

His point is that taxpayer money funds, or subsidizes, most of these industries. And that many big businesses get a free ride at our expense. (Wal-Mart’s big trucks with “We sell for less” emblazoned on their side didn’t pay for the nation’s roads. Nor do they pay the upkeep. If they had to, maybe Wal-Mart wouldn’t be able to sell for less than the local guys who they’ve put out of business and who doesn’t enjoy the same subsidies).

This is a gigantic topic — on which I can only scratch the surface here. (Carson’s book is 640-pages long.) However, I have given you enough of a glimpse to draw one key conclusion. Before I lay that out, let me give you an analogy for what is happening to the U.S. economy.

Let’s go to the dark forests of old Prussia and Saxony.

These forests were great economic assets, full of trees of commercial value. In the late eighteenth century, the state and large commercial firms decided to manage the forests to get more out them.

And so they undertook a plan of careful seeding, planting and cutting. The trees, arranged in alleys, would be easier to harvest. Planting more desirable trees at the expense of the “trash trees” would increase the yield per hectare.

It worked brilliantly. But there was a deep problem with all of this, a problem that didn’t show up until they planted the second generation of conifers.

Many first generation trees grew perfectly. Then the second generation showed “amazing retrogression” according to one source. The yields fell. People had to apply more and more effort to keep the yields from falling further. It was a losing battle. In some of the worst cases, the trees started to die en masse. This is when the term waldsterben or “forest death,” entered the language.

Though we don’t understand all the reasons how this happened, we know that the diversity of the forest was gone. People disturbed the balance of grasses, flowers, lichens, ferns, mosses, shrubs and vines, as well as birds, frogs and other species that kept the old forests thick and rich. The simplified forest had far fewer species and was more vulnerable to disease and storms. It required heavy intervention to create and maintain this unnatural forest.

This example comes from James Scott’s book, Seeing Like the State: Why Certain Schemes to Improve the Human Condition Have Failed. I highlighted a particular passage in my copy because it describes exactly the problem with the US economy today. Here is Scott describing the simplified forest: “The massive outside intervention that was required to establish it… is increasingly necessary in order to sustain it as well.”

In a sentence you have the problem the U.S. faces. We have created this unnatural beast — an engorged, corrupt thing we call an economy — that does not reflect the preferences of the people who actually live in it, as would be expressed in a free market.

So, ever-greater sums must be spent to keep up appearances. This is why more and more Fed intervention — the seemingly endless mountain of liquidity from QE, QE2, Operation Twist, et al. — does less and less. This is why a $3.5 trillion in Federal spending — a figure that is up 70% in the last decade — produced the slowest economic recovery on record.

And this is why all this posturing over whether to intervene in Syria is a lot of eyewash for the public. On the inside, everybody knows the U.S. needs this war, as it will need another war after that.