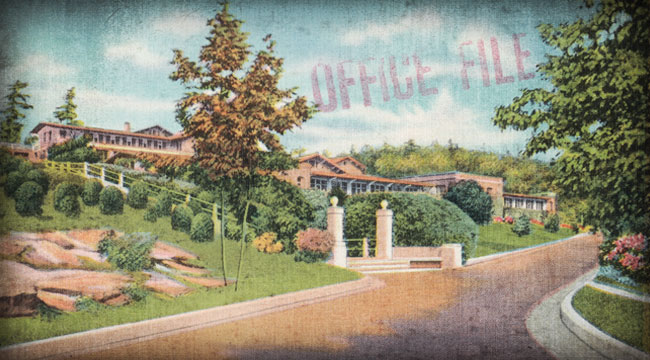 The Secret "Ebola Camp" FEMA Doesn't Want You to Know About

The email came from one of the most levelheaded people I know. So I dutifully clicked on the link. And the links that followed.

What happened was this: A crew from WNYT-TV in Albany, New York, was doing a story about a historic cottage where President Ulysses Grant spent his final years. It sits near a prison the state of New York was days away from closing. A man identifying himself as a corrections officer came up and said, “No filming.”

After a little back-and-forth, he declared, “Look, I’m not going to go around with you on this. You’re going to leave the property.” Eventually, he called state police, asking them to detain the journalists and confiscate the video they’d shot.

The upshot, according to WNYT’s website: “After roughly an hour and calls between newsroom leadership, state police, and the Department of Corrections, our crew was allowed to leave without surrendering the video.”

To the people at 21st Century Wire, something is funky: “Clearly, this is not just an ’empty prison,’ as WNYT reported.”

To a website called Intellihub, the takeaway was obvious: “Now, some, like myself, suspect that the old McGregor prison facility may be a newly staffed FEMA camp in preparation for the coming Ebola outbreak that has been hyped by the media.”

Look, we’re hip to the Rex 84 program, run by Lt. Col. Oliver North back in the ’80s — a plan to suspend the Constitution in the event of “national emergency.” And we know about the episode of Jesse Ventura’s Conspiracy Theory TV show dealing with “FEMA camps” — by some accounts, the only one of 22 episodes that was never rerun after its first airing.

But truly — take it from someone who worked with TV reporters and photographers for 20 years: The encounter in upstate New York looks like a guy who thinks a badge grants him an extra measure of manhood… throwing his weight around in the post-Sept. 11 era, when any photography of a government building is deemed “suspicious.”

Bonus points: The run-in took place back in July. Weeks before “Ebola” became a household word.

We’re not sure what it is, but there’s something about Ebola that makes people a little — well, unhinged.

But deep in the limbic system — your “lizard brain” — lies a fear response that, for whatever inscrutable reason, is triggered by the thought of a disease that can liquefy your organs and drown you in your own blood.

Which means that even if the worst fears about Ebola never materialize, the mere existence of those fears can dramatically alter money flows.

“It’s just a matter of time before the next case is announced,” says FDA Trader editor Paul Mampilly.

If you read us regularly, you know Paul has been gravely concerned about Ebola. He still is.

“Nothing has changed with Ebola scenario. I still 100% believe that Ebola is going to become a problem in the U.S. and around the world.

“The arc of an epidemic like Ebola is sporadic at first,” he explains. “That’s what scientific models based on past epidemics show you, like this one in Zaire in 1995 that killed 200 people. 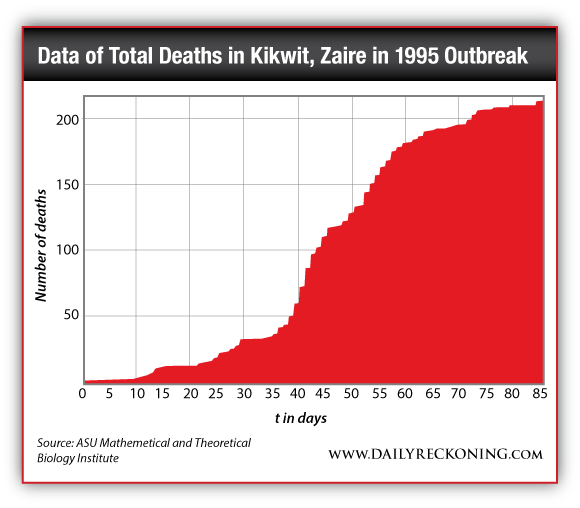 “As you can see in this chart, when Ebola starts, people die slowly first. And then the number spirals upward. Sound familiar?

“Right now, we’re in that beginning period in the United States, when infections and deaths are still low. Disastrous epidemics always follow the pattern of this chart. There’s no escaping it. In other words, the Ebola cycle is repeating itself, except this time in the U.S. and worldwide.

“So it won’t be long before the next case of Ebola shows up in New York, or Los Angeles or San Francisco and Chicago. Or where you live. The moment of Ebola panic is coming.”

“When it arrives, I believe a handful of stocks can go up by 300% or even more,” says Paul.

There’s a surfeit of junk you can find online about “Ebola stocks” — sloppily researched, hastily thought out. It’s no surer evidence of the old saw about you get what you pay for.

Paul, on the other hand, has 25 years of investment smarts, including a gig running a $5 billion hedge fund. And for the last 15 years, biotech stocks have been his special focus. Satisfied readers of FDA Trader write in to tell us that in only two weeks, they make enough money to cover their subscription cost for three years — and have $700 left over.

P.S. Paul has just wrapped up an intensive research project into the stocks best-positioned to profit from an Ebola panic, real or imagined. It has consumed almost all of his time in recent weeks… And I was pleased to be able to share his exhaustive research with my 5 Min. Forecast readers. Not a 5 Min. reader? Click here now to sign up.