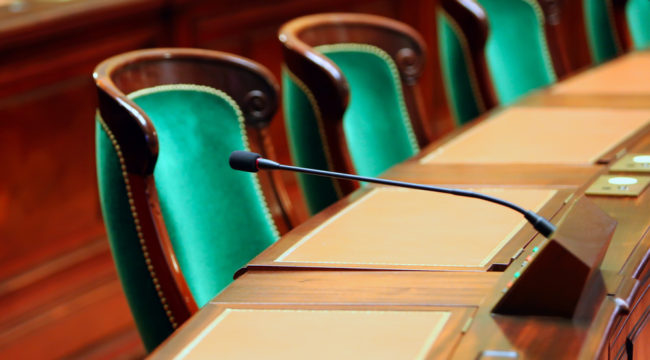 “There’s no question the banking regulators blew it leading up to the [2008] financial crisis. And the problem is we’re gonna blow it again… Human societies are prone to mass delusion.”

Well, props for honesty, I guess. But it’s about the most transparency you’ll ever get from one of the most opaque institutions on the planet, the Federal Reserve.

Kashkari saw the Panic of 2008 up close and personal. He was the Treasury Department’s point man for the bank bailouts. Since he began his current gig 18 months ago, he’s made it his mission to break up the big banks. We even cited his first speech on the job here in The 5: “I believe the biggest banks are still too big to fail and continue to pose a significant, ongoing risk to our economy.”

Hours before Kashkari held court last night, Yellen was speaking in London — declaring the banks are “very much stronger” and another 2008-level crisis is unlikely to occur “in our lifetimes.”

Here’s the full quotation: “Would I say there will never, ever be another financial crisis?. You know probably that would be going too far, but I do think we are much safer, and I hope that it will not be in our lifetimes and I don’t believe it will be.”

For the record, Ms. Yellen turns 71 in a few weeks. Brings to mind the old joke about a lifetime guarantee — “My lifetime, not yours.”

Anyway, it’s on the record for posterity. Just as it was when her predecessor Ben Bernanke declared in July 2005, “We’ve never had a decline in housing prices on a nationwide basis.”

Yellen’s audience was a bunch of fellow eggheads at the British Academy. At least Kashkari is trying to get out among real people — which history has shown can be a dicey proposition for a Fed pooh-bah.

The most famous instance of public outreach by the Fed was also the most disastrous.

In March 2011, New York Fed chief Bill Dudley ventured into Queens to meet with the hoi polloi. At the time, even the official inflation numbers were racing past 3% and the rising cost of living was on everyone’s mind.

On the basis of a wonky concept known as “hedonic adjustments,” Dudley essentially told the crowd that inflation was a figment of their imagination. “Today,” he explained, “you can buy an iPad 2 that costs the same as an iPad 1 that is twice as powerful. You have to look at the prices of all things.”

From the back of the room came the devastating rejoinder: “I can’t eat an iPad.”

Yeah, that was fodder for weeks…

There were no “edible iPad” moments for Kashkari last night.

Maybe that’s because he doesn’t fit the profile of the typical central banker. A second-generation Indian-American, he was an aerospace engineer by training before he got into the finance racket.

He’s also more glib than the typical central banker. No doubt his political skills were honed by running for governor of California in 2014. (Jerry Brown stomped him 60%-40%.)

And so when small-business owners and retirees hectored him about how low interest rates are forcing them to put more of their savings into the stock market, more than they’re comfortable with, he was prepared with artful dodges: Rates have been declining steadily since the early 1980s. Raising rates now would crater the weak recovery. Pension plans groaning under the weight of low rates are mismanaged. (All of which is true, but beside the point.)

He also came back to the plan he developed last year to break up the big banks, thereby mitigating the risks he admits still exist.

But what if another 2008-scale crisis erupts before such a plan can be implemented? (Assuming the vast forces arrayed against the plan on both Wall Street and K Street could be overcome in the first place.)

That was the question I posed during the town hall, after consulting via email earlier in the day with Agora Financial’s macroeconomic maven Jim Rickards.

Sure, I said, the Fed would quickly bring interest rates back down to near-zero levels. But does the Fed really have the capacity to add another $4 trillion to its balance sheet? Or would the liquidity have to come from some other source — such as the International Monetary Fund’s super-currency known as SDRs, or “special drawing rights”? 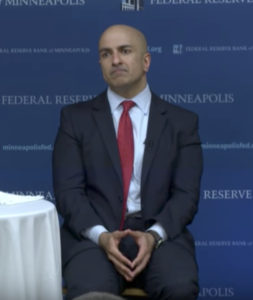 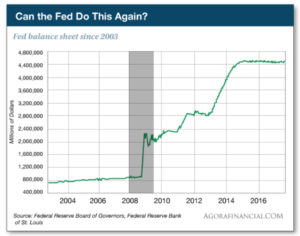 That is, the torches and pitchforks will come out if the Fed embarks willy-nilly on a new round of money printing. From $4.5 trillion now to $8.5 or $9 trillion? Not happening. Especially not when the Fed is already leveraged more than 100-to-1.

In a crisis, the liquidity to save the system will have to come from the only solvent institution left standing — the IMF. It will print SDRs in mass quantity to be distributed among the globe’s governments and central banks. You and I will continue to transact in dollars — but thanks to the proliferation of SDRs, those dollars’ purchasing power will shrink dramatically, and in a hurry.

This isn’t Jim’s idle speculation; the plan was laid out in an IMF white paper in January 2011.

Kashkari dodged this one too — as best he could.

To begin with, he said, “There’s nothing on the horizon that tells us another ’08 crisis is imminent” — even as he allowed that “by their nature you never see the risk until it blows up in your face.”

“I think the Fed still has a lot of tools in our arsenal,” he went on. He itemized them as follows: zero interest rate policy, or ZIRP. More quantitative easing. And forward guidance, which is Fed-speak for how the Fed jawbones the markets about its intentions.

In other words, more of the same.

“Whether we could expand our balance sheet another $4 trillion, I don’t know. I don’t know what the limits would be in the Treasury market or the mortgage-backed securities market. But I think we would have a lot of tools at our disposal. And ultimately if it were another ’08-type crisis, Congress would have to get involved again.”

Kashkari is an adamant defender of the 2008 bank bailouts that Congress approved and he oversaw. “We hated to do it. It was the right thing to do.”

[Recovered history: He left out the part about how his boss, Treasury Secretary Hank Paulson, threatened Congress that if it didn’t act, the resulting economic meltdown would necessitate martial law. This story was confirmed at the time by both Rep. Brad Sherman (D-California) and Sen. Jim Inhofe (R-Oklahoma).]

“A disappointing answer, but not too surprising coming from a Fed official,” Jim tells me this morning.

A while back, Jim himself asked the same question of Timothy Geithner, Obama’s first Treasury Secretary… and got an equally unsatisfying answer.

If you find this episode a little unsettling — especially the part about “no imminent crisis” even though Kashkari admits central bankers do a lousy job of anticipating crises — you might want to take some of the precautionary measures now. Rickards’ suggests increasing your allocations to 10% of your investable assets in gold.