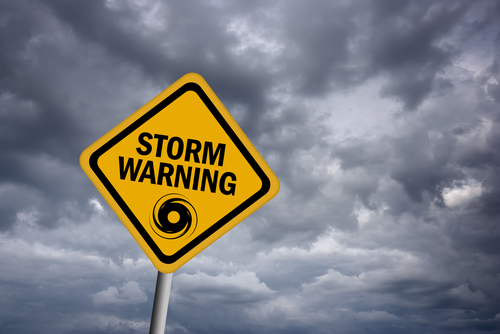 Markets are closed this afternoon. Maybe tomorrow too. There’s a storm a brewin’.

Investors must have been wondering how long the good weather would last…how long it could last. Stocks have been on the up and up since March of 2008, the nadir of the crisis. They’ve doubled from then ’till now. A 100% increase in four and a half years. And yet, looking around, things don’t seem to be twice as good now as they were then. The average American’s wage didn’t double between the Beijing and London Olympics. Productivity didn’t increase by 100% either. Nor is the workforce of today twice the size of the 2008 workforce.

What then, aside from stocks, has doubled since those panicky days of four years ago? Student debt has been on a rampage recently, ticking over the $1 trillion (not a typo) in outstanding loans milestone earlier this year. But even that hasn’t doubled since 2008. What about national debt? The debt clock first rolled over the $10 trillion (also not a typo) during Obama’s first year in office. Since then it’s blown out to $16.2 trillion. A terrifying increase, to be sure…but still not a 100% increase. (Though we’re assured the republicrats are working hard to meet that goal.)

Oh wait! Here’s something…the food stamp line! From roughly 26 million participants back in 2008 to nearly 47 million today, the government’s SNAP program is very close to doubling in size. And, according to Obama’s Secretary of Agriculture Tom Vilsack, that’s something to be very proud of indeed.

“I should point out,” Vilsack said in an interview last month, “when you talk about the SNAP program or the food stamp program, you have to recognize that it’s also an economic stimulus. Every dollar of SNAP benefits generates $1.84 in the economy in terms of economic activity. If people are able to buy a little more in the grocery store, someone has to stock it, package it, shelve it, process it, ship it. All of those are jobs. It’s the most direct stimulus you can get in the economy during these tough times.”

Vilsack’s “logic” is eerily similar to the permanently-startled Nancy Pelosi, who infamously characterized unemployment benefits as “one of the biggest stimuluses (sic) to our economy. Economists will tell you, this money is spent quickly. It injects demand into the economy, and it’s job creating. It creates jobs faster than almost any other initiative you can name.”

So there you have it. According to the politicos, a bull market in unemployment and food stamp program participation is actually good for the economy. A real Keynesian bonanza. We can only imagine the stimulus the coming hurricane will deliver to the eastern seaboard when it makes landfall sometime today.

So never mind battening down the hatches, Fellow Reckoners. It’s time to open the shutters and put your valuables out in the street, right in the path of destruction. The recovery hurricane is on its way, bringing with it wealth and abundance, one broken window at a time.