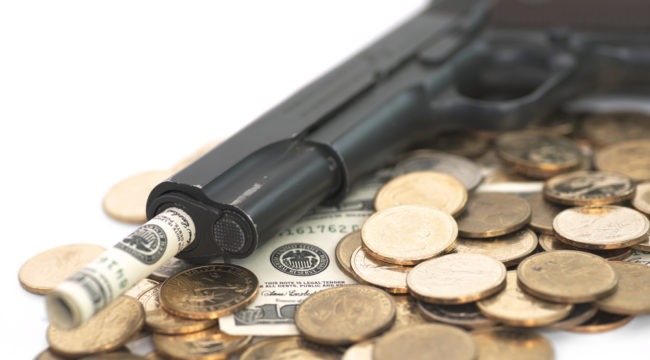 In a CNBC interview this week, Warren Buffett was asked if he would still consider investing in gun companies after the school shooting in Florida and calls for corporate America to stop supporting the NRA and gun manufacturers.

This was his response:

“I think what the kids are doing there is very admirable, but I don’t think that Berkshire should say, ‘We’re not going to do business with people that hold guns.’ That would be ridiculous.”

A few more interview excerpts on the same topic…

“I don’t believe in imposing my views on 370,000 employees and a million shareholders. I’m not their nanny on that.”

“I think you should be pretty careful before a company takes a big political opinion.”

There’s no doubt Buffett’s stance is going to create a lot of controversy.

In fact, I know from personal experience.

It was February of 2010, and I was standing on a large stage at the Money Show in Orlando.

As a first-time speaker, I had been told to expect about 50 people for my seminar. Instead, it was standing room only with 389 eager jammed into the space.

Clearly, my talk on retirement and income investing had gotten people excited.

Feeling good about the presentation I’d just given, which included some dividend-paying recommendations, I opened the floor up to questions.

“How can you even recommend tobacco companies, which have caused so much harm to people?”

Like Buffett, I had to stick to my guns.

As I explained to the audience, I watched my own grandfather die from lung cancer that was directly related to his lifelong smoking habit.

Yet I’ve never considered it my job to make ethical choices for other people.

My goal is uncovering the very best wealth-building, income-generating opportunities that are legally available anywhere in the world.

So although I might not like smoking myself, it would be doing investors a disservice not to recommend a phenomenal profit machine regardless of what its product was.

And for the record, the stock I recommended is up several hundred percent since I gave that talk!

At the same time, I can totally relate to putting your money where your mouth is and aligning your investment portfolio with your personal views.

It’s just not anyone else’s job to tell you how to do that.

As far as a business operating with its own sets of guiding principles?

Take Patagonia, the outdoor gear maker headquartered just down the road from my house.

As the company’s founder, Yvon Chouinard explained in his autobiography Let My People Go Surfing, Patagonia is looking to reshape the way clothing is manufactured as well as plenty of other things.

It’s not a secret at all. Many consumers support the company precisely because of its stance on various topics like environmental conservation. Others reject its products because they dislike for the same (or other) reasons.

Of course, Patagonia is a privately-held company. It doesn’t really have to answer to outside shareholders.

That’s one of the points Buffett is making … public companies have to answer to a whole mess of people, with widely divergent views.

Presumably, the one expectation that all shareholders have in common is future profits.

Beyond that, the opinions on what’s good or bad probably differ wildly.

This is also why I think most so-called “ethical” or “socially conscious” investment funds and ETFs also fail conceptually.

What are the odds that your viewpoint – or anyone else’s – corresponds exactly to mine?

It doesn’t even have to be a truly polarizing topic like guns or cigarettes.

Heck, I’ve taken flak for recommending a soda company in the past!

At the end of the day, here’s what I would say on the whole topic…

As a financial analyst sending research and ideas to a wide range of people, I want to make objective recommendations based on numbers and likely trends rather than personal feelings.

Meanwhile, every one of us should speak up about topics that matter – whether it’s to elected officials, corporate executives, or anyone else.

As consumers, we should make informed choices and spend our money as we see fit.

And as individual investors, we should allocate money in line with our own beliefs.

Just realize that the rest of the world may not conform to your particular worldview and you might have to adjust your expected returns accordingly.

To a richer life,

Nilus began his professional career at Jono Steinberg’s Individual Investor Group, where he published his original research through a regular investment column. Later, he worked for a private equity business and spent five years editing Standard & Poor’s flagship investment newsletter. He’s the acclaimed author of The Standard & Poor's Guide for the New Investor, which was published by McGraw-Hill. It’s since been translated into Chinese.

After leaving New York City, Nilus formed his own multi-million firm to produce and publish independent research with hundreds of thousands of Americans.

He became a widely-recognized expert on income investments and retirement strategies, and built up an enviable ten-year track record of winning ideas.

His research and analysis has appeared on a number of investment websites, including BusinessWeek, Dow Jones’ MarketWatch, and Fox News. He has discussed dividends, income investing, and personal finance matters on popular investment shows such as Traders Nation, Invest Express, Wall Street Shuffle, and Money Matters.

At the age of 39, he decided to retire to a quiet life in Santa Barbara with his wife and daughter. He spent his spare time surfing up and down the California coast.

At the urging of his followers, Nilus’ came out of retirement in 2017 to become the director of The Rich Life project.