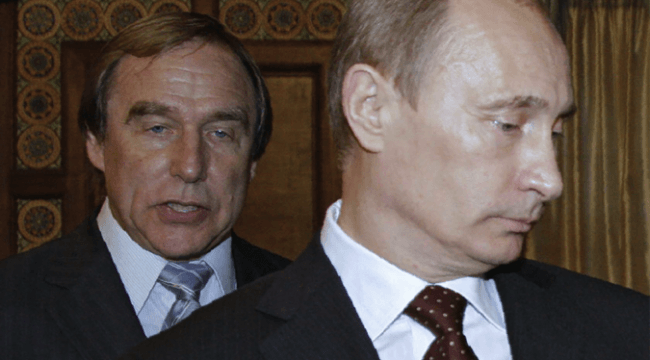 His name is Sergei Roldugin… and he’s a damn fine cellist.

I’ve never heard him play. But he must be the Michael Jordan of cello players.

How else could he amass more than $100 million dollars in an offshore bank account?

Or could being Vladimir Putin’s close friend have something to do with it?

Either cello players now make more than most NBA players… or I need to get to Moscow and make new friends.

Well, as I’m about to show you, the intrigue extends far beyond friends of Putin…

The Biggest Data Leak in History

You see, enterprising Sergei rose to prominence last week for something other than his cello playing.

He’s at the center of a growing international scandal the establishment media is calling “the biggest data leak in history.”

NBC News said its “sending shockwaves throughout the world.”

Leaked documents from the Panamanian law firm Mossack Fonseca reveal that Sergei was allegedly involved in a scheme in which billions from Russian state banks were hidden offshore.

And it appears Sergei himself has personal control of an offshore account worth more than $100 million.

But Sergei’s not the only one…

Here’s a short list of other global elites accused of using the same Panamanian firm to shield assets in offshore accounts:

Close relatives of Chinese President Xi Jinping, along with other top Chinese officials…

All told, the leak exposes the secret offshore holdings of at least 12 current and former world leaders and 128 other public officials from various countries… extending all the way back to the 1970s.

The media is calling the scandal the Panama Papers. In all, 11.5 million pages of confidential documents were leaked to journalists, who are now feverishly reviewing them.

And this is just one law firm and one leak. I wonder what the real scope is?

What’s most curious about this story is how the establishment media expects us to be shocked by these revelations.

You mean there’s a well-connected group of global elites who game the system they created for personal benefit while subjecting the rest of us to a different set of rules they themselves refuse to live under?

This isn’t news to me. Regular readers already know all about the Deep State…

It’s the same group of elites that netted billions while cratering the global economy with its risky financial bets… only to be rescued by taxpayer-funded bailouts.

It’s the same group the Fed has rewarded with zero interest rates to continue their pillaging while millions of working-class Americans have seen their retirement incomes decimated because of no interest income.

It’s the same group of elites led by the likes of Senator Harry Reid and former House Speaker Denny Hastert, who after a couple of decades earning government salaries somehow amassed empires in the tens of millions of dollars.

How did Reid and Hastert do it? Magically they encountered once-in-a-lifetime real estate deals that happened way more than once in their lifetimes.

And even though all of this isn’t news to you, it still stings. Look, there’s no quick fix short of us storming D.C. with pitchforks. (Though that does have a certain appeal to it.)

But I don’t just rail against the system to get my blood pressure up. I am keeping close tabs on the workings of the Deep State for a reason.

I don’t expect to be invited to its membership meetings. But you and I are smart enough to know it sets the agenda—an agenda we all have to deal with regardless.

We know the Deep State moves economies and markets. It makes trends. And it’s those same trends we follow for profits.

We’re finding a way to fight back against a corrupt system by tracking and profiting from the trends it creates.

Sure, the game is rigged. But we’re prudently playing it to our benefit by identifying and trading market trends as they happen.

The Greatest Fundraiser of All Time

As for our friend Sergei, the cellist, it turns out he wasn’t in it for the money after all.

When asked by a reporter how he ended up with $100 million in an offshore account, he suggested the money came from a series of donations from wealthy benefactors in order to buy musical instruments for Russian children.

So it turns out that Sergei is only guilty of being one fantastic fundraiser. And he did it all for the children. He’s the Russian Jerry Lewis.

Please send me your comments to coveluncensored@agorafinancial.com. I’d love to hear your thoughts. And make sure they’re “uncensored.”

As the Trump administration takes power, Russia is poised for substantial growth in trade, energy and influence in the coming year. Here’s what to watch and why investment opportunity is in the air over Russia…