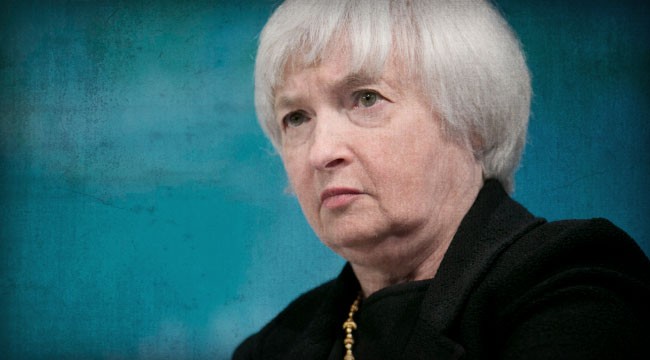 As the Dow Jones approaches 20,000 following Trump’s triumph, investors have reached a state of euphoria…

The Dow has scored 15 all-time closing highs since the election.

CNBC reports that ETFs have seen nearly $100 billion in inflows.

One of the Fox Business “analysts” even called for Dow 30,000 yesterday.

But in the midst of the market ecstasy, the vampire squid Goldman Sachs thinks it knows what’s going to bring this party to an end…

Goldman analysts note that the Trump rally’s #1 nemesis is the pantsuit in flesh Janet Yellen.

Goldman paints the picture of a more aggressive Fed pushing interest rate hikes in order to offset Trump’s fiscal stimulus, which could lead to higher inflation.

That will put downward pressure on stocks, effectively taking away the punch bowl to the Trump kegger.

The bond market rout could spread to stocks, as huge losses in bonds could spark forced selling in equities…

Turn Off the Soap Opera

So which factor will actually crater the market?

Trend followers don’t waste time paying attention to fundamentals that may or may not be relevant. And that’s exactly what market fundamentals are – unknowns.

They don’t help me or you achieve investment goals. They are non-essential.

There’s only one thing that’s essential to me… and that’s price action.

Everything else is white noise.

This is hard for many people to accept. They like the daily drama of following the news cycle.

They feed off the ups and downs. It lets people feel in on the game, smarter even.

But it’s a soap opera – nothing more, nothing less.

Leading academic researchers actually track this soap opera to gauge what they call the global economic policy uncertainty index, which you can see captured in the chart below. 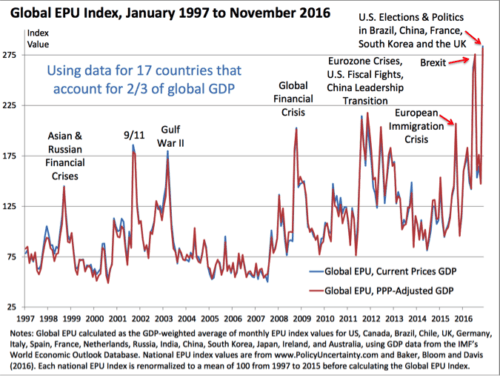 As you can see, the global EPU is at an all-time high right now.

That means the soap opera has juicy plot lines as far as the eye can see. Lots of drama.

But most investors don’t have a winning strategy to deal with uncertainty.

Do you try to predict the next shoe to drop? You know it’s out there. It’s coming. But when? And what will be the impact to the markets?

All of that is unknowable.

Do you hold on and hope for the best? That will set you up for massive losses that will take you years (and maybe decades) to recover from… if you ever do.

So if you can’t predict the exact timing of these events and the swift direction in which they can move the markets, what to do?

The obvious answer is to employ a strategy that can identify strong changes in trend and be flexible enough to switch direction quickly so you can consistently make money.

That’s precisely what trend following is designed to do. And it works. It’s worked for decades in real time.

Researchers from AQR Capital Management and New York University examined market data going all the way back to 1903. And here’s what they found:

We find that trend following has delivered strong positive returns each decade for more than a century.

The performance has been remarkably consistent over an extensive time horizon that includes the Great Depression, multiple recessions and expansions, multiple wars, stagnation, the Global Financial Crisis, and periods of rising and falling interest rates.

The bottom line is, since 2008, market uncertainty has averaged about twice the level of the previous 23 years. It’s the new normal.

We don’t know precisely what’s going to move markets or when it’s going to hit. But we know movement is coming.

Good news: vaccines are coming… The bad news… The deeper meaning of Janet Yellen being the next Treasury Secretary…