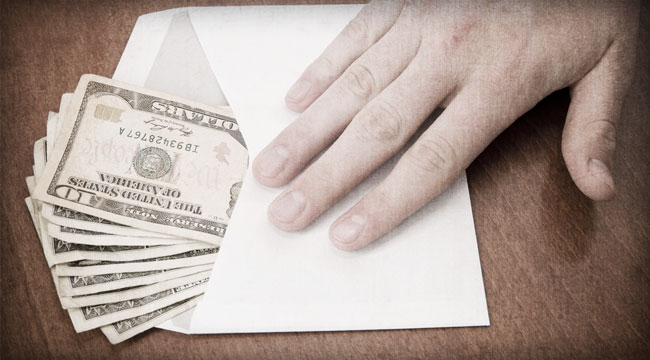 Protect Yourself from the Crony Capitalists

[Note: This article is a continuation of the essay “A Bastardized Capitalism That’s Threatening Your Wealth”]

Whether in Europe or the United States, the application and practice of the principles of a free market economy were compromised from the start with the existence of monetary central planning in the form of central banking.

First seen as a device for assuring a steady flow of cheap money to finance the operations of government in excess of what those governments could extract from their subjects and citizens directly through taxation, monopolistic central banks were soon rationalized as the essential monetary institution for economic stability.

But the German economist, Gustav Stopler, clearly explained many decades ago in his book, This Age of Fable (1942), the government’s control of money undermines the very notion of a real free market economy:

“Hardly ever do the advocates of free capitalism realize how utterly their ideal was frustrated at the moment the state assumed control of the monetary system… A ‘free’ capitalism with governmental responsibility for money and credit has lost its innocence. From that point on it is no longer a matter of principle but one of expediency how far one wishes or permits governmental interference to go. Money control is the supreme and most comprehensive of all governmental controls short of expropriation.”

Once government controls the supply of money, it has the capacity to redistribute wealth, create inflations and cause economic depressions and recessions; distort the structure of relative prices and wages so they no longer reflect the values and choices of the buyers and sellers in the market; and generate misallocations of labor and capital throughout the economy that brings about imbalances of resource uses inconsistent with a market-based pattern of consumer demands for alternative goods and services.

Then, in the face of the market instabilities and distortions caused by the government’s mismanagement of the money supply and the banking system, the political authorities rationalize even more government intervention to “fix” the consequences of the boom-bust cycles their own earlier monetary central planning policies created.

The privileged classes of the pre-capitalist society hated the market. The individual was freed from subservience and obedience to the nobility, the aristocracy, and the landed interests.

For these privileged groups, a free market meant the loss of cheap labor, the disappearance of “proper respect” from their “inferiors, and the economic uncertainty of changing market-generated circumstances.

For the socialists of the nineteenth and twentieth centuries, capitalism was viewed as the source of exploitation and economic insecurity for “the working class” who were considered dependent for their livelihood upon the apparent whims of the “capitalist class.”

A “capitalist” system with a welfare state is no longer a free society.

The welfare state became the “solution” to capitalism’s supposed cruelty, a solution that created a vast and bloated welfare bureaucracy, made tens of millions of people perpetual wards of a paternalistic state, and drained society of the idea that freedom meant self-responsibility and mutual help through voluntary association and human benevolence.

A “capitalist” system with a welfare state is no longer a free society. It penalizes the industrious and the productive for their very success by punishing them through taxes and other redistributive burdens under the rationale of the “victimhood” of others in society who are claimed to have not received their “fair” due.

It weakens and then threatens to destroy the spirit and the reality of individual accomplishment, and spreads a mentality of “entitlement” to what others have honestly produced. And it restores the fearful idea that the state should not be the protector of each citizens individual rights but the compulsory arbiter who determines through force what each one is considered to “rightfully” deserve.

Peaceful and harmonious free market competition in the pursuit of excellence and creative improvement is replaced by the coerced game of mutual political plunder as individuals and groups in society attempt to grab what others have through a redistributive system of government force.

The ideal and the principle of the free market economy, of capitalism rightly understood were never fulfilled. What is called “capitalism” today is a distorted, twisted and deformed system of increasingly limited market relationships, as well as market processes hampered and repressed by state controls and regulations.

In this warped development and evolution of “historical capitalism,” as Wilhelm Ropke called it, the institutions for a truly free-market economy have either been undermined or prevented from emerging.

The socialists and “progressives” twisted and stole the good and worthy concept of liberalism as a political philosophy of individual rights and freedom, respect and protection of honestly acquired private property, and peaceful and voluntary industry, production and trade. It was usurped and made into the “modern” notion of liberalism as paternalistic Big Brother government controlling every aspect of life in the name of the “social good.”

The word “capitalism” was used as a term of abuse by the socialists almost from the beginning. But it also meant a system of creative and productive enterprise and industry by free and self-guiding individuals, each pursuing their peaceful self-interests through honest work, saving, and investment. The “self-made” man of capitalism was an ideal and model for the youth of America. The man who was motivated by his own independent self-responsible vision, who built something, new, better, and greater as a reflection of the potential of the reasoning and acting human being who sets his mind to work.

His wealth, if successfully accumulated, was honorably earned in the marketplace of ideas and industry, not plundered and stolen by force and political power. No individual is robbed or exploited on the truly free market, since all trade is voluntary and no man could be forced into an exchange or association not to his liking and consent.

Free competition sees to it that everyone tends to receive and earn a wage that reflects the estimation of his productive worth to others in society. Each individual is free to improve his talents and abilities to make his services more valuable to others over time, and earn the commensurate higher wages from possessing more marketable skills.

Wealth accumulated enables investment and capital formation for the production of new, better and more goods and services wanted by the consuming public, the majority of whom are the very wage-earning workers employed in the production and manufacture of those goods under the market-determined guiding hands of successful businessmen and entrepreneurs.

Free Market capitalism makes the consumer “king” of the marketplace who determines whether businessmen earn profits or suffer losses, based on what they decide to buy and how much they are willing to pay.

It is free market capitalism that helps make each man and woman a “captain” of their own fate, with the freedom about what work and employment to pursue, and the liberty to spend the income they earn in their own personal, desiring way to live the life they value and want, and that gives meaning and purpose to their own life.

No person need put up with humiliation, abuse or disrespect from a bureaucrat or political official who has control over their fate through the power of government planning, regulation and redistribution.

Free market capitalism offers people opportunities and choices as consumers, workers and producers, with the liberty to change course whenever the benefits from doing so seem to outweigh the costs in the eyes of the individual.

Free market, or laissez faire, capitalism makes this all possible because it rests on a deeper political philosophical foundation based on the idea and ideal of the right of the individual to his own life, to be lived as he desires and chooses, as long as he respects the equal right of others to do the same.

And free market capitalism calls for each individual’s peacefully earned property and income to be respected and protected from plunder and theft, and that includes any created rationale and attempted justification to rob Peter to redistribute to Paul through the coercive power of government.

The good name of “capitalism” has to be recaptured and restored, just as the good name and concept of “liberalism,” rightly understood, should be returned to the advocates of individual liberty and free enterprise.

But this task requires friends of freedom to explain and make clear to others that what we live under today is not “capitalism” as it could be, should be and properly really means.

The reality of that “historical capitalism,” about which Wilhelm Ropke spoke, is the “crony capitalism” that must be rejected and opposed so that free men may someday live under and benefit from the truly free market capitalism that is the only economic system consist with a society of human liberty.

Richard Ebeling
for The Daily Reckoning

Ed. Note: Crony capitalists make their wealth because they get access to investment opportunities most people don’t even know about. And if you had been reading the email version of this article, you would have learned of someone who cracked the code to one of these investments, and gave readers a chance to invest with the wealthy elite. Click here and subscribe to Laissez Faire Today so you don’t miss out on the next opportunity.

Building up a retirement savings that can last 20, 30, or 40 years is indeed a challenge. But there’s a group that has redefined retirement planning by sacrificing today so they can have a better tomorrow…

Richard Ebeling is a professor of economics at Northwood University. He was formerly president of The Foundation for Economic Education (2003–2008), was the Ludwig von Mises Professor of Economics at Hillsdale College (1988–2003) in Hillsdale, Michigan, and served as vice president of academic affairs for The Future of Freedom Foundation (1989–2003).