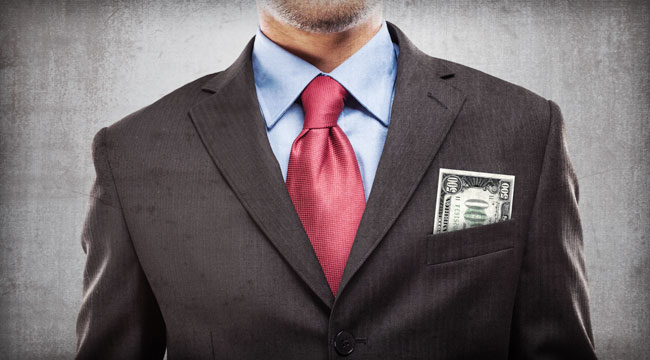 In the minds of many people around the world, including in the United States, the term “capitalism” carries the idea of unfairness, exploitation, undeserved privilege and power, and immoral profit making. What is often difficult to get people to understand is that this misplaced conception of “capitalism” has nothing to do with real free markets and economic liberty, and laissez-faire capitalism, rightly understood.

During the dark days of Nazi collectivism in Europe, the German economist, Wilhelm Ropke (1899-1966), used the haven of neutral Switzerland to write and lecture on the moral and economic principles of the free society.

“Collectivism,” he warned, “was the fundamental and moral danger of the West.” The triumph of collectivism meant, “nothing less than political and economic tyranny, regimentation, centralization of every department of life, the destruction of personality, totalitarianism and the rigid mechanization of human society.”

If the Western world were to be saved, Ropke said, it would require a “renaissance of [classical] liberalism” springing “from an elementary longing for freedom and for the resuscitation of human individuality.”

At the same time, such a renaissance was inseparable from the establishing of a capitalist economy. But what is capitalism? “Now here at once we are faced with a difficulty,” Ropke lamented, because, “capitalism contains so many ambiguities that it becoming ever less adapted for an honest spiritual currency.”

As a solution, Ropke suggested that we “make a sharp distinction between the principle of a market economy as such… and the actual development which during the nineteenth and twentieth centuries has led to the historical foundation of market economy.”

“If the word ‘Capitalism’ is to be used at all this should be with due reserve and then at most only to designate the historical form of market economy… Only in this way are we safe from the danger… of making the principle of the market economy responsible for things which are to be attributed to the whole historical combination … of economic, social, legal, moral and cultural elements … in which it [capitalism] appeared in the nineteenth century.”

In more recent times it has become common to use the term “crony capitalism,” implying a “capitalism” that is used, abused, and manipulated by those in political power to benefit and serve well connected special interest groups. These groups desire to obtain wealth, revenues and “market share” that they could successfully acquire on an open, free and competitive market by offering better and less expensive goods and services to consumers than their rivals.

…the term “crony capitalism,” [implies] a “capitalism” that is used…by those in political power to benefit and serve well connected special interest groups.

This facet of a corrupted capitalism is, unfortunately, not new. Even as the classical liberal philosophy of political freedom and economic liberty was growing in influence in Europe and America in the nineteenth century, many of the reforms moving society in that freer direction happened within a set of ideas, institutions, and policies that undermined the establishment of a truly free society.

Thus, the historical development of modern capitalism was “deformed” in certain essential aspects virtually from the start. Before all the implications and requirements of a free-market economy could be fully appreciated and implemented in the nineteenth century, it was being opposed and subverted by the residues of feudal privilege and mercantilist ideology.

Even as many of the proponents of free market capitalism and individualist liberalism were proclaiming their victory over oppressive and intrusive government in the middle decades of the nineteenth century, new forces of collectivist reaction were arising in the form of nationalism and socialism.

Three ideas in particular undermined the establishment of the true principles of the free market economy, and as a result, historical capitalism contained elements totally inconsistent with the ideal of laissez-faire capitalism — a free competitive capitalism completely severed from the collectivist and power-lusting state.

In the seventeenth and eighteenth centuries, the emergence of the modern nation-state in Western Europe produced the idea of a “national interest” superior to the interests of the individual and to which he should be subservient. The purpose of “public policy” was to define what served the interests of the state, and to confine and direct the actions of individuals into those channels and forms that would serve and advance this presumed “national interest.”

In spite of the demise of the notion of the divine right of kings and the rise of the idea of the rights of (individual) man, and in spite of the refutation of mercantilism by the free-market economists of the eighteenth and nineteenth centuries, democratic governments continued to retain the conception of a “national interest.”

Instead of being defined as serving the interests of the king, it was now postulated as serving the interests of “the people” of the nation as a whole. In the twentieth century, public policy came to be assigned the tasks of government guaranteed “full employment,” targeted levels of economic growth, “fair” wages and “reasonable” profits for “labor” and “management,” and the politically influenced direction of investment and resource uses into those activities considered to foster the economic development viewed as advantageous to “the nation” in the eyes of those designing and implementing “public policy.”

Capitalism, therefore, was considered to be compatible with and indeed even requiring activist government. In 19th-century America it often took the form of what were then called “internal improvements” — the government funded and subsidized “public works” projects to build, roads, canals, and railways, all which transferred taxpayers’ money into the hands of business interests interested in getting the government’s business rather than that of consumers in the marketplace.

It also manifested itself through trade protectionism meant to artificially foster “infant industries” behind high tariff walls. Selected businesses ran to the government insisting that they could never grow and prosper unless they were protected from foreign competition, at the expense, of course, of the consumers who would then have fewer choices at higher prices.

Today, it still includes public works projects, but also manipulation of investment patterns through fiscal policies designed to target “start-up” companies considered environmentally desirable or essential to “national security.” It also takes the form of pervasive economic regulation that controls and dictates methods of manufacturing, types and degrees of competition, and the associations and relationships that are permitted in the arena of commerce and exchange both domestically and in international trade.

In the misplaced use of the phrase “American free market capitalism” there is little that occurs in any corner of society that does not include the long arm of the highly interventionist state, and all with the intended purpose and resulting unintended consequences of political power being applied to benefit some at the expense of many others.

Perversely, the interventionist state in the evolution of historical capitalism has come to mean in too many people’s eyes the inescapable prerequisite for the maintenance of the market economy in the service of an ever-changing meaning of the “national interest.”

Richard Ebeling
for The Daily Reckoning

Ed. Note: Pure, free-market capitalism is a beautiful thing. Sadly, that’s not what’s driving the U.S. economy. But rather than mope about being excluded from the profits being made by the “insiders,” you should safely – and legally – tap the income streams of these wealthy insiders without them ever knowing? Sign up for the FREE Laissez Faire Today email edition for regular opportunities to do just that.

Richard Ebeling is a professor of economics at Northwood University. He was formerly president of The Foundation for Economic Education (2003–2008), was the Ludwig von Mises Professor of Economics at Hillsdale College (1988–2003) in Hillsdale, Michigan, and served as vice president of academic affairs for The Future of Freedom Foundation (1989–2003).