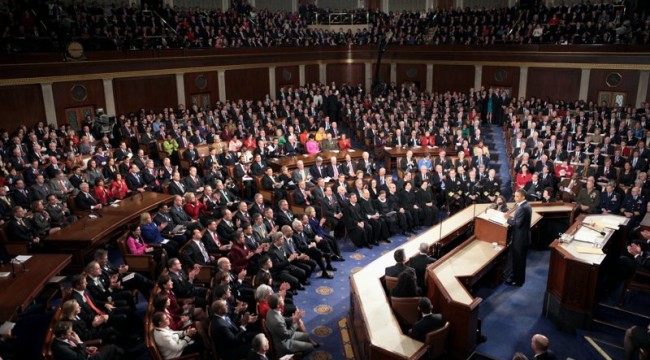 In his seventh, and final, State of the Union address this January, President Obama, clearly looking to bolster his legacy as the president who vanquished the Great Recession, boldly asserted that “Anyone claiming that America’s economy is in decline is peddling fiction.”  Unfortunately for the President, more and more Americans seem to believe (with an adequate basis in proof) that the fiction is emanating from the White House.

It’s hard to imagine how anyone can really assert with a straight face that the economy is currently “strong.” The most recent Gross Domestic Product (GDP), from 4th Quarter 2015, shows us barely inching along at a 1% annualized growth rate (Bureau of Economic Analysis, 2/26/16). Given that moderate growth used to be measured in the 3%-4% range, and that recent declines in the trade balance could further subtract from both 4th (2015) and 1st quarter GDP, we could be forgiven for raising an eyebrow or two in reaction to Obama’s boast.

For the President and his boosters, last week’s February non-farm payroll report, which showed 242,000 new jobs created and an unemployment rate below the crucial 5% level (Bureau of Labor Statistics, 3/4/16), provided proof that the Administration’s  economic policies, whatever they may actually be, are working. By beating the 190,000 consensus forecast for February of economists surveyed by Reuters, and revising upward the low 151,000 jobs previously reported in January to 172,000 (BLS, 3/4/16), the government was able to point to two months that averaged north of 200,000 new jobs.

The good news prompted Obama to invite reporters into a Cabinet meeting to crow about the results and to shame those who somehow remain skeptical, saying (to paraphrase) “America’s businesses are creating jobs at the fastest pace since the 1990s…and I don’t expect…this evidence to convince some…to change their doomsday rhetoric.”(The White House, Office of the Press Secretary, 3/4/16) He’s right on that point, the gloom should remain. Yes, the economy is creating jobs, but they are not the kind that can bring us back to the days of solid growth. The more important fact, which Obama did not mention, was that the report showed one of the largest drops in weekly earnings ever reported. It’s too bad that our media seems to be incapable of noticing such a tremendous problem right below the surface.

One month ago, the January jobs report was enlivened by a healthy .5% jump in average hourly earnings. At the time, I argued that such good news would be a one-time event as it resulted from the increases in minimum wages that kicked in at the start of the year in many states across the country. As predicted, the momentum was fleeting. In February, average hourly earnings did not increase the .2% that was expected, but fell .1%. The drop may not seem like much, but it is the first decline since December 2014, and one of only six declines in the past ten years, according to BLS data. Making matters worse, average hours worked declined from 34.6 hours to 34.4. Combining falling wages and falling hours translated into a .7% decline in weekly earnings, the biggest drop ever measured in that statistic. (BLS, 3/4/16) For some reason Obama let that one slide.

The truth is that the big numbers in job creation do not reflect healthy economic growth but a fundamental shift in the labor force away from high-paying, full-time jobs to low-paying, part-time jobs. The February “household” survey of job creation shows that 78% of the jobs created were part-time, and 82% of those were in the low-paying service industries such as food service and retail. This partially explains February’s data that shows exports at the lowest level in almost five years. It’s hard to export the things created by bartenders and waiters. Meanwhile, we lost much higher-paying full time jobs in manufacturing, mining, and logging that would have produced things capable of being exported. Yes jobs are being created, but only at the expense of higher-paying jobs that are being destroyed. (BLS, 3/4/16)

Most observers assumed that the February Challenger Job Cut Report (released the day before non-farm payrolls) would be a big improvement over the very large 75,000 layoff figure posted in January. And while the 61,000 layoffs announced in February was an improvement, it was not nearly as much as observers had hoped. Averaging the two months puts the current pace for announced layoffs at 32% higher than the same period last year. Also, last week, the PMI Service Index, which came in at 53.2 in January, came in at 49.7 in February, showing actual contraction (below 50), (joining the smaller manufacturing sector, which has been contracting for months).

Companies have been incentivized to cut their full-time work force by a variety of costly and burdensome regulations that are largely the result of the Obama Administration. If a company replaces a full-time worker with two part-time workers, the statistics count that as a job gain. But this only holds up if you count quantity while ignoring quality. The view from the street looks quite different, as workers prefer one good job to several bad ones. This is why rallies for Donald Trump and Bernie Sanders are so well-attended. The underemployed are fed up with platitudes from the elites and they flock to these outsider candidates, who seem to understand their pain.

It appears that investors are no longer signing up for the optimism either. Normally, a much stronger than expected non-farm payroll report would have ignited a market rally, but this one ignited a rally in gold, which at one point neared a high of $1,280 per ounce (gold was up 3% for the week). The strong jobs report should have convinced investors that the Fed would raise rates, which would hurt gold. But that didn’t happen. The markets have started to figure out that the jobs numbers are meaningless and that soon they will roll over to mirror all the bad data emanating from other sources.

I don’t expect that the President will ever officially acknowledge that the economy has weakened, let alone relapsed into recession. He has walked out too far on his rhetorical branch to walk it back. As a lame duck, he really has no incentive to do so. Such admissions would also undercut the campaign of Hillary Clinton,who is running as the logical successor to carry his torch.

But Janet Yellen is in a very difficult spot. If she continues to ignore the growing signs of recession, she runs the risk of letting one develop prior to the election. This would favor the Republican challenger, whether that is Donald Trump or Ted Cruz, neither of whom would be inclined to reappoint her as Fed Chairwoman, if elected. Allowing the Greenspan bubble to bust on Bush’s watch sealed John McCain’s fate, allowing Obama to ride a wave of voter outrage into the White House in 2008. Yellen does not want Trump to catch a similar wave in 2016.

As a result, I expect the Fed to soften its rhetoric in the very near future. They will promise that the punch bowl is going to remain on the table for the foreseeable future. This means that market movements that have defined 2016 thus far may accelerate in the months ahead, and may provide relief for investors in commodities and foreign currencies who have had the patience to wait out the nonsense.