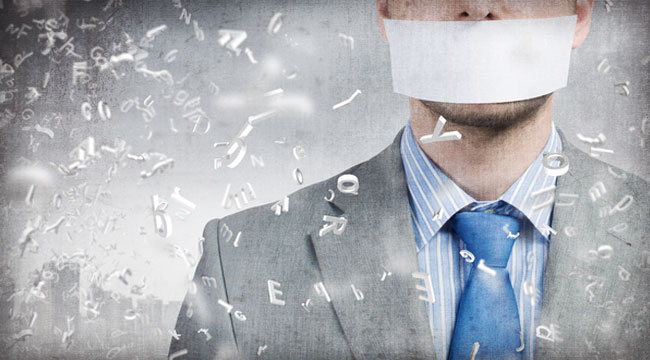 No Gratitude for Government Whistleblowers

If I understand Princeton historian Sean Wilentz correctly, progressives ought not to be grateful to Edward Snowden, Julian Assange, and Glenn Greenwald for exposing government spying because they are not card-carrying progressives.

Apparently they have either hung out with libertarians, praised or supported a libertarian, or said something sympathetic to some part of the libertarian philosophy — which cancels out anything they might have gotten credit for. (Wilentz is no stickler for consistency, since he criticizes Greenwald for taking libertarian positions now and also for making anti-immigration statements in the past. So is he too libertarian, Professor, or not libertarian enough?)

The problem for Wilentz is that when guys like these disclose that the government conducts comprehensive surveillance in ways that would have made 1984’s O’Brien drool, it puts the entire progressive agenda in jeopardy. He writes,

“To them, national security is not a branch of the government; it is the government, or it is tantamount to being the government: a sinister, power-mad authority… It is impossible, therefore, to reform this clandestine Leviathan from the inside. And so the leakers are aiming at de-legitimating and, if possible, destroying something much larger than a set of NSA programs. They have unleashed a torrent of classified information with the clear intent of showing that the federal government has spun out of control, thereby destroying the public’s faith in their government’s capacity to spy aggressively on our enemies while also protecting the privacy of its citizens. They want to spin the meaning of the documents they have released to confirm their animating belief that the United States is an imperial power, drunk on its hegemonic ambitions.” [Emphasis added.]

At first glance, that seems odd. If individuals are willing to risk their lives and liberty to reveal that the government vacuums up vast quantities of information on everyone — without probable cause or even grounds for suspicion — why do their larger agendas matter? Shouldn’t progressives care about this even if they disagree with other things the leakers believe?

But it matters to Wilentz. Employing a dubious logic, he apparently reasons thusly: We have a government worthy of support because of Social Security, Medicare, Medicaid, the Affordable Care Act, and protection from “our enemies.” Leaks which reveal that this government spies on us indiscriminately erode confidence in that government and, by implication, all those good things. Therefore, people with apparently libertarian motives who leak that information are to be reviled.

If you caught that bit of question-begging above, well done! Wilentz repeatedly assumes what is in dispute. For example, he fears that “the public’s faith in their government’s capacity to spy aggressively on our enemies while also protecting the privacy of its citizens” is being destroyed, yet he never gets around to showing that the government can do both things. He claims, without evidence, that the government is worthy of allegiance and is not “an imperial power, drunk on its hegemonic ambitions.” But as Henry Farrell writes at Crooked Timber, “There’s plenty of evidence both of imperialism and hegemonic drunkenness.”

Neoliberalism is corporate statism, not the freed market.

Wilentz commits another bit of question-begging. He says Snowden, Assange, and Greenwald share a “political impulse that might be described… as paranoid libertarianism.”

Oh my! The qualifier paranoid suggests that libertarians unreasonably believe that the government may not have the best interests of regular people at heart. Wilentz assumes — without argument — that we libertarians are wrong about that. But if we’re right, then paranoia is a baseless charge. So Professor Wilentz is obligated to show that we are wrong before he uses that defamatory qualifier.

He will have a tough time pulling off that feat, for throughout American history the government has destroyed as much freedom as it could get away with. As Chris Hedges sums up (in a mock Obama speech, “What Obama Really Meant Was..”),

“Americans were steadily shorn of their most basic constitutional rights and their traditions of limited government. U.S. intelligence agencies were always anchored in a system of secrecy — with little effective oversight from either elected leaders or ordinary citizens.…

“In the 1960s, the U.S. government spied on civil rights leaders, the Black Panthers, the American Indian Movement and critics of the Vietnam War, just as today we are spying on Occupy activists, environmentalists, whistle-blowers and other dissidents. And partly in response to these revelations decades ago, especially regarding the FBI’s covert dirty tricks program known as COINTELPRO, laws were established in the 1970s to ensure that our intelligence capabilities could not be misused against our citizens. In the long, twilight struggle against communism, and now in the fight against terrorism, I am happy to report that we have eradicated all of these reforms and laws.”

Wilentz seems to live in fear that the baby (the welfare/warfare state) will be thrown out with the bathwater (the admitted “abuses” by the NSA). (He does not regard the NSA as abusive per se.) “Where liberals, let alone right-wingers, have portrayed the leakers as truth-telling comrades intent on protecting the state and the Constitution from authoritarian malefactors, that’s hardly their goal,” Wilentz writes. “In fact, the leakers despise the modern liberal state, and they want to wound it.”

If only it were so.

Peter Frase at Jacobin makes an interesting point when he sees in Wilentz’s article “an attempt to conflate the ideal of the liberal state with the existing national security state, in an attempt to force defenders of the welfare state to also embrace the authoritarian warfare state.” He continues,

“I think that when leftists set themselves up as defenders of government against libertarian hostility to the state, they unwittingly accept the Right’s framing of the debate in a way that’s neither an accurate representation of reality nor a good guide to political action.

“The Right, in its libertarian formulation, loves to set itself up as the defender of individual liberty against state power. And thus contemporary capitalism — often referred to by that overused buzzword, ‘neoliberalism’ — is often equated in casual left discourse with the withdrawal of the state.

“But in the works that developed neoliberalism as a category of left political economy, this is not how things are understood at all. Neoliberalism is a state project through and through, and is better understood as a transformation of the state and a shift in its functions, rather than a quantitative reduction in its size.…

“The growth of the surveillance state … clearly makes up a central part of the neoliberal turn, and is not something ancillary to it.”

Aside from Frase’s placing libertarians on the Right, this is good stuff. (Likewise, Wilentz explicitly places the Future of Freedom Foundation on the Right, demonstrating either his poor research skills or his sense of humor.)

Both the establishment Left and the establishment Right offer flawed package deals: the former’s consists in the welfare/warfare state, while the latter’s consists in the warfare/“free”-enterprise state. (Enterprise is not really free because the political environment is deeply corporatist.) In practice, the two are hardly different except for their rhetorical emphases. The point is to hold various constituencies in line by having them believe they must accept the whole package.

Neoliberalism is corporate statism, not the freed market. As Frase says, “it’s a state project through and through.” But contrary to Frase, libertarians (unlike most conservatives) know better than to conflate “contemporary capitalism” with “the withdrawal of the state,” although at times many libertarians talk as if they don’t.

Otherwise, Frase gets it right. The welfare state, warfare state, and corporate state are of a piece. The government interventions needed to assist well-connected economic interests and to carry out world hegemony create permanent structural economic problems and hardships for the most vulnerable in society.

To buy off the victims and reduce the chance of civil strife, the power elite builds an intrusive welfare bureaucracy designed to toss crumbs to the trapped population. In other words, the welfare state is a mechanism of social control made necessary by the corporate-welfare/warfare state.

So in the end, despite his errors and calumnies, Wilentz is right in a way he doesn’t know. One cannot critique the surveillance state without critiquing the rest of the existing political apparatus.

Ed. Note: Defenders of the status quo find reasons to look past the government’s horrible shortcomings. And government officials just want you to comply to the simple rules and regulations they have in place for you. Compliance makes society function smoothly, even if the laws on the books are silly and outdated. Non-compliance makes it look like you’re not a team player. And for many people, that could make you dangerous. Good. Find out the best ways on how to not comply, break away from the plan they have set for you, and determine your own future. It all starts with two simple words. And in today’s issue of Laissez Faire Today, readers were given a unique opportunity to learn what they are. Sign up for the FREE Laissez Faire Today email edition, right here, for the chance to discover them for yourself.

The Real Reason We Have a Welfare State

Today, Bill Bonner explores the origin of what we know as the Welfare State, and why it no longer makes sense. If a person can get more from private insurance, private health care, and private education, why support the feds? Read on…