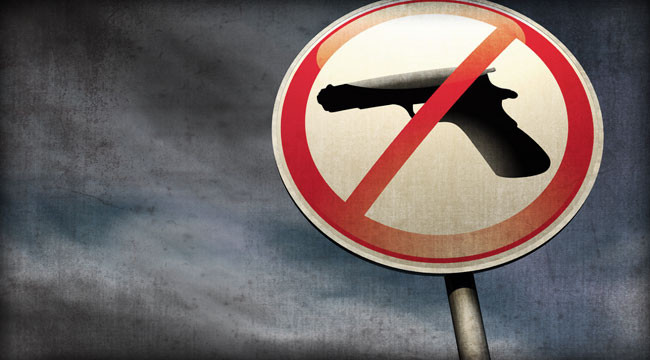 Washington, D.C. — The complex negotiations aimed at bringing a long-term solution to the federal government’s expenditure and debt problem have produced an unconventional proposal. “Although the solution only focuses on a tiny fraction of government expenditures,” declared President Barack Obama, “it is a step in the right direction.”

“Moreover,” he added, “it will show the American people that what’s good for them is good for us, too.”

The idea is to defund and abolish the Secret Service, the Capitol Police, and all other police protection privileges enjoyed by high-ranking members of the three branches of the federal government. These forms of protection will be replaced by a simple and efficient measure from which ordinary Americans have long benefited: gun-free zones.

The enabling legislation — the Stay Unarmed, Coy and Confident in Equal Royalty Act, or SUCCER Act — has now reached the final negotiation stage between the House and the Senate.

Yet the SUCCER Act also contains a revolutionary feature. It would create new portable and mobile gun-free zones for the president, the vice president, Supreme Court justices, and any other member of the ruling class who faces “serious, persistent, and credible threats.” “Portable” and “mobile” are the keywords: These new gun free-zones would follow the protected person in all his or her moves.

For example, the president and the vice president would always be protected by their portable and mobile gun-free zones, which would move with them and guarantee a 30-yard-radius gun ban around them. “Because we need special protection measures,” explained Vice President Joe Biden, “we will get a more personal and dedicated gun-free zone than the general ones that cover ordinary citizens. But at least the nature of our protection arrangements will not be different from what our electors get.”

“This is what I will tell my wife,” added the vice president, who is known for his subtle mind: “If you feel threatened, just deploy your personal gun-free zone around you.” He said that as soon as the SUCCER Act is passed, he will sell the two shotguns he and his wife keep for self-defense.

“If school children are well protected by gun-free zones,” added a White House spokesbeing, “why not provide the same protection to our high officials, with a mobile component added?”

The addition of mobile gun-free zones to the general gun-free zones that protect the rulers in their daily working environment seems to have mellowed the administration’s previous resistance.

The New York Sex Workers Union (NYSWU) is lobbying Congress against the SUCCER Act, which would lead to the dismantling of the Secret Service and the dismissal of its 4,500 agents. “Any one of these agents,” says NYSWU president Ashley Dupré, “is a potential, if not actual, customer. It is not the time, in the current economy, to destroy jobs, whether full time or blow.”

Ed. Note: This essay was prominently featured in the free Laissez Faire Today email edition. To sign up for free, click here.

This week Trump took matters into his own hands, signing a new executive order that hands the EPA a one-two knockout punch. he order creates a strong foundation for new U.S. jobs. It removes restrictions that have curtailed economic growth. And it paves the way for alert investors to make a lot of money! Today, Zach Scheidt shows you how to profit from this new executive order…