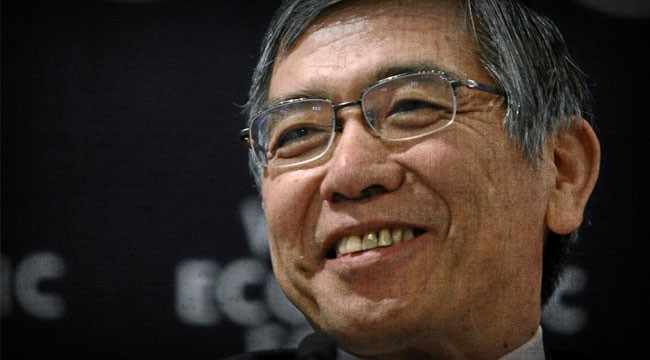 On Oct. 31, 2014, staffers at Japan’s central bank were sweating bullets. They’d worked past midnight, drafting a proposal to shift the Bank of Japan’s dangerous yen-printing experiment into higher gear.

The staffers’ boss, BOJ governor Haruhiko Kuroda, was concerned the Japanese public would maintain a deflationary mindset. The public was hoarding cash, expecting prices to drift lower forever. In Kuroda’s view, this is a problem in need of fixing.

Kuroda wants to shock the public out of its deflationary mindset. Nothing short of a revolution in inflation expectations will suffice.

For the past two years, Kuroda had nudged the Japanese public into expecting higher prices. In anticipation of inflation, Kuroda’s theory says, there would be a spending spree. The spending spree might be enough to revolutionize Japan’s consumer psychology.

Ahead of the BOJ’s Oct. 31 meeting, Kuroda must have been nervous his policy proposal wouldn’t receive a majority vote. He proposed accelerating the yen-printing program begun in 2013. Previously, the Japanese monetary base was growing at an annual pace of about 60-70 trillion yen. Kuroda proposed an acceleration, to 80 trillion yen per year.

After a heated two-hour debate, it came down to a cliffhanger: Kuroda and his deputies were reliable “yes” votes; two skeptical board members, as expected, voted “no”; and the four other members split down the middle.

With a 5-4 vote, the BOJ launched a major new battle in the global currency war…

Immediately after the vote became public, the U.S. dollar jumped in value against the yen. Japanese stocks spiked. The BOJ is heading down a one-way path toward currency destruction…

My work on central banks and currency wars indicates that the yen will keep weakening against the U.S. dollar in the coming months.

Kuroda is a zealot in his belief that the can revolutionize inflationary psychology in Japan. He took the helm of the BOJ in early 2013, vowing to boost inflation and inflation expectations.

He immediately launched the largest quantitative easing program the world had ever seen — twice as big, in GDP terms, as the Federal Reserve’s QE3 program. The BOJ pledged to purchase $1.4 trillion of Japanese government bonds over the course of 2013 and 2014 using printed money.

“[The] Bank of Japan was explicit about its goal to increase inflation in order to increase nominal, if not real, GDP,” I wrote in The Death of Money. “The BOJ explicitly targeted an inflation rate of 2% ‘at the earliest possible time.’”

Kuroda is increasingly desperate. The prior plan to inflate Japan’s base money supply wasn’t shocking enough to boost inflation expectations. So Kuroda sought an acceleration in yen printing, got the votes and announced the policy shift on Oct. 31.

The Bank of Japan is so far down the road to currency destruction that it’s now the only sizeable bidder in the Japanese government bond (JGB) market. JGB trading volumes have collapsed. With Japan’s shrinking workforce, declining competitiveness and a national debt that requires near-zero interest rates, more and more of the JGB market will be converted into cash deposits. The yen-based money supply will keep growing.

Why is Japan’s debt a problem if the central bank stands ready to convert the entire stock of debt into yen?

Here’s why: It’s only a matter of time before the supply side of the Japanese economy starts viewing yen as hot potatoes to be traded for real assets — a spiraling inflation crisis that the BOJ won’t have the flexibility to fight.

Currencies die quickly when producers lose confidence they’ll retain value and withhold supply from the market. In The Death of Money, I use the term “phase transition” to describe the process:

“When wood burns and turns to ash, that is a phase transition, but there is no easy way to turn ash back into wood. The Federal Reserve believes that it is managing a reversible process. It believes that deflation can be turned to inflation, and then to disinflation, with the right quantity of money and the passage of time. In this, it is mistaken.”

Like the Federal Reserve, the BOJ believes it can dial up inflation and dial it back down. But confidence is fragile and will get even weaker with each surge of yen emitted from the BOJ.

Many central banks, including the BOJ, are squandering their reputational credibility on wealth effect experiments. These experiments are leaving central banks with huge balance sheets that cannot be allowed to shrink.

P.S. We cover the global currency war on an ongoing basis in the DR. Signing up is completely free — and you’ll get daily insights from our team sent straight to your inbox at 4:00pm each day. Click here to join our ranks now.