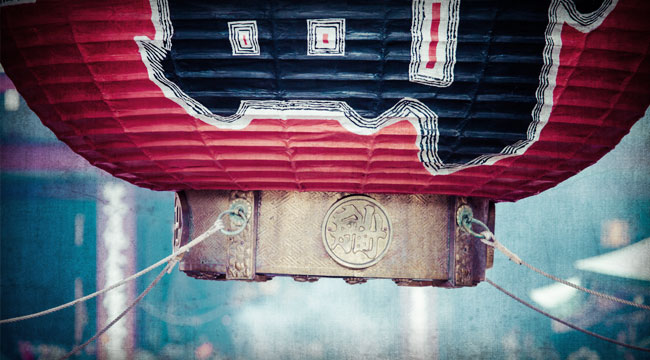 In the early 2000s, the phrase “lost decade” began to be applied to Japan’s economic performance over the course of the 1990s. The lost decade started with the popping of one of the greatest stock market bubbles in history.

But the lost decade included more than just stock market losses. Japan also saw crashing property values, falling interest rates, rising unemployment, declining and stagnant GDP, and the worst demographic profile of any major economy. In short, Japan exhibited all of the hallmarks of a depression of the kind not seen since the 1930s.

As the term “lost decade” became commonplace among economists, a funny thing happened. Another decade came and went and the Japanese economy was still in depression.

Today, a full 25 years after the bubble burst in Japan, that country continues to struggle with deflation, zero interest rates, weak banks, adverse demographics, and periodic bouts of negative growth. Japan has endured a 25 year depression, and there is no end in sight.

The second arrow was fiscal policy consisting of tax relief and more government spending on infrastructure. The third arrow was structural reform of the over-regulated, over-protected Japanese economy.

The first arrow was fired almost immediately. The explicit goal of monetary ease was to cheapen the Japanese yen (JPY) relative to the U.S. dollar (USD) and the currencies of its Asia export competitors such as Korea, Taiwan and China.

Japanese exports picked-up somewhat. To that extent, the first arrow seemed to work, at least in the short run.

The second arrow, fiscal policy, misfired. Instead of using fiscal policy to cut taxes and provide stimulus, Japan raised sales taxes, which was like slamming the brakes on the economy. Japanese GDP plunged 1.9% in the second quarter of 2014 and fell again by 0.6% in the third quarter.

This was Japan’s second recession in the past two years. Growth was positive in the fourth quarter of 2014, but the uptick was a modest 0.4%.

The third arrow of Abenomics, structural reform, was never fired at all. Structural reform includes things like immigration, women in the workforce, greater efficiency in Japan’s retail distribution network, and cleaning up bad debt from bank balance sheets.

This is critical because structural reform is the only long-term solution to Japan’s depressed economic condition.

Depressions are different from normal business cycles because they are the result of structural impediments to growth that impede capital formation, investment and new hiring. Monetary and fiscal policies can only provide temporary relief and their impact diminishes the longer they are used. A structural problem requires structural, not cyclical, solutions.

With interest rates at zero and structural reform off the table, Japan is a one-trick pony. Its only policy tool is to cheapen the yen. The purpose of a cheapened yen is to increase inflation in Japan in the form of higher import prices.

This inflation may at least increase nominal growth even if it does not help with real growth. Japan needs nominal growth to deal with its massive nominal debt that now exceeds 200% of GDP.

Even the cheap yen strategy is failing because Japan’s primary import is oil. If the dollar price of oil were constant, a cheaper yen would make the oil more expensive in Japan, which might feed inflation.

But oil is priced in dollars and the dollar price of oil has plunged faster than the yen. The result is that the price of oil in yen has actually gone down, not up, in the past six months.

With all three arrows of Abenomics having failed in different ways, the Japanese economy looks like it is starting to roll over again for the third time in three years. This is revealed in the latest Japanese manufacturing purchasing managers index (PMI) shown below: 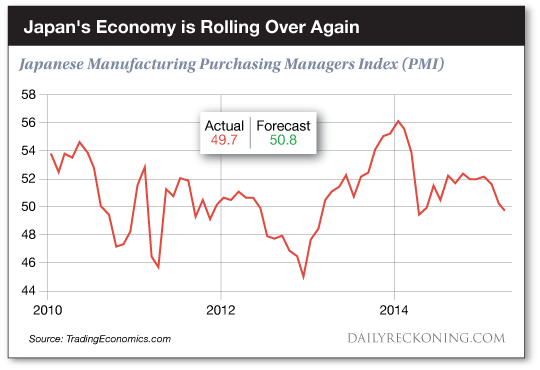 These PMI numbers are not only below expectations, but they are below the critical 50.0 level. Anything less than 50.0 indicates that the manufacturing sector in Japan is now contracting.

In the short run, there is only one thing Japan can do to avoid another recession. That is to fire the first arrow again and weaken the yen even more. Taking into account Japan’s goal of 2% inflation, and considering the percentage of total imports represented by oil, the yen would have to plunge to a level of 150 or lower in order for Japan to come anywhere close to its inflation target.

The JPY/USD cross rate is now in a vulnerable position. The rate has stayed close to 120 for the past four months. The Japanese economy is stalling out again.

If the yen were to get stronger, it would be devastating for Japan and would pull the U.S., China and Europe further into the deflationary vortex they are trying to avoid. Oil prices in dollars look stable for the time being, which means that a cheaper yen actually could bring some badly needed inflation to Japan. There are no other options at Japan’s disposal; a cheaper yen looks like the only solution.

There are no sure things in investing, but the JPY/USD cross rate is the closest thing to a one-way bet we have seen in a while. The chances of JPY getting stronger are low and the chances of it getting weaker are high.