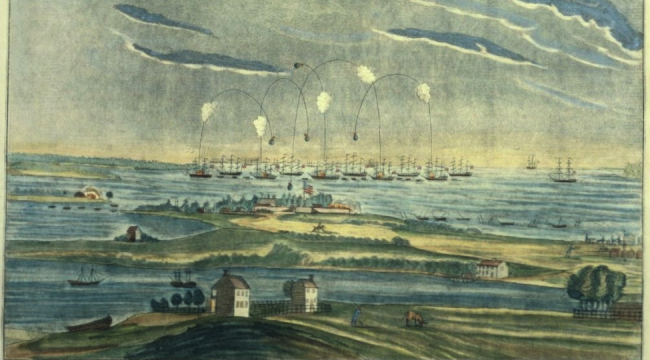 How to Spend $5.5 Million on a War You Already Won

The State of Maryland is blowing $5.5 million to commemorate a minor moment in a pointless war.

Pardon us if we’re a little grumpy today, but Baltimore, our home base, is going nutso with War of 1812 nostalgia right now. Festivals, parades, flyovers, etc. This past weekend was the 200th anniversary of the Battle of Fort McHenry — a failed British bombardment that ended with an oversized American flag still flying “by the dawn’s early light,” as Francis Scott Key memorialized it.

“State officials,” The Wall Street Journal informs us, “have awarded $5.5 million in grants for celebrations, educational programs and research, hoping to generate a lasting patriotic buzz about Maryland’s starring role in a war that largely has been written off as a historical footnote.”

“The War of 1812 was America’s first neocon war,” wrote Jefferson Morley at Salon two years ago.

“With an audacity that would become familiar, the war hawks appealed to a combination of personal pride — the British navy was forcibly conscripting Americans — and the prospect of material gain — the absorption of British Canada — wrapped up in love of country.”

The material gain part never panned out: “U.S. forces attacking Canada,” Morley wrote, “were repeatedly repulsed in 1812-14, giving the Canadians a quiet superiority complex that they have not entirely lost to this day.” Heh…

The War of 1812 also begat a major default. Banks printed notes in mass quantity to buy the government bonds needed to finance the war. The only banks that didn’t take part in the printing frenzy were in New England, where opposition to the war was widespread.

Weeks before the bombs burst in air over Fort McHenry, the U.S. government and the state governments outside New England came to a fateful decision, described by Murray Rothbard in his A History of Money and Banking in the United States.

“No nation could preserve its freedom in the midst of continual warfare.”

“As the banks all faced failure, the governments, in August 1814, permitted all of them to suspend specie payments — that is, to stop all redemption of notes and deposits in gold or silver — and yet to continue in operation.

“In short, in one of the most flagrant violations of property rights in American history, the banks were permitted to waive their contractual obligations to pay in specie while they themselves could expand their loans and operations and force their own debtors to repay their loans as usual.”

In 1795, one of the Founders wrote that “Of all the enemies to public liberty, war is, perhaps, the most to be dreaded, because it comprises and develops the germ of every other.”

“War,” he went on, “is the parent of armies; from these proceed debts and taxes; and armies, and debts and taxes are the known instruments for bringing the many under the domination of the few… No nation could preserve its freedom in the midst of continual warfare.”

The guy who wrote that was James Madison — who waged the war as president two decades later.

Ed. Note: In addition to his insightful commentary, Dave also provided a serious look at the markets at large — where they’re headed and how you can make some serious gains — in his daily 5 Min. Forecast. To get all of Dave’s incredible insight, as well as every chance he provides for you to discover real, actionable investment advice, sign up for The 5 Min. Forecast for yourself, right here.