[Ed. note: With 40 years of experience both in Washington and on Wall Street, David knows exactly what Trump is up against — and that people are out to get him.

It’s still not too late, but time’s running out. In his latest book, Trumped!, David explains how Trump needs to “make 10 great deals” to take back America from the swamp critters. Only then can American democracy be restored.

You can get a copy of Trumped! FREE. We urge you to act before March 15 — when the national debt ceiling comes back into force, all of the GOP’s divisions will be laid bare and the fireworks are set to explode. Click here to claim your copy.]

If we had to mark it on a calendar… we’d venture that today’s the day Wall Street started to realize the Trump economic agenda is much like Gertrude Stein’s description of Oakland: “There is no there there.”

Before the market open, Treasury Secretary Steve Mnuchin went on CNBC and pledged the Trump administration’s commitment to getting tax reform done before Congress heads back home for its late-summer break.

“We want to get this done by the August recess,” he said. “We’ve been working closely with the leadership in the House and the Senate, and we’re looking at a combined plan.”

Sounds great! What are the details, sir?

Sorry, no dice. “Look, as I’ve said before, we’re primarily focused on a middle-income tax cut and simplification for business.”

No numbers, no discussion of what rules might be axed. Just more of the same feel-good pablum.

The August timeline isn’t something Mnuchin just pulled out of his posterior because it sounded good.

He knows too well that Wall Street has constructed a fantasy in its collective mind about the Trump administration as a “Morning in America” rerun of the Reagan administration.

Reagan was inaugurated on Jan. 20, 1981; the Kemp-Roth tax cut passed both houses of Congress by Aug. 4.

That was a significant feat on its own. But the Trump administration has set the bar far higher… because the White House and Congress have agreed that Obamacare reform is supposed to get done before the tax bill.

If Mnuchin had said something, anything, specific… the major U.S. stock indexes would be screaming still higher into record territory today.

Indeed, they’re all in the red as we write, the Dow off a tenth of a percent at 20,752. The small-cap Russell 2000 is off more than 1% at 1,388; that’s the sound of traders hitting the “sell” button as they realize the next catalyst for growth in small stocks won’t be coming from a tax cut.

“It won’t be long until the impending collapse of the post-election Trump-O-Mania frenzy in the stock market,” says our David Stockman.

David’s been saying since early December that the Trump agenda is doomed and Wall Street’s expectations will be dashed. He says so with the authority that comes from being “present at the creation” of the Reagan tax cut in 1981 — when he was White House budget director.

We forgot all about it till today… but if you look on YouTube for “A Day With President Reagan,” you’ll find an NBC News special from Feb. 13, 1981; MSNBC reran it late the night of Reagan’s funeral in 2004. Midway through, there’s a four-minute section with David drawing detailed strokes of a budget plan for Reagan’s Cabinet, in office barely three weeks.

It’s striking to watch now… because it reminds us we’ve seen nothing approaching those specifics coming from Team Trump. Heck, it wasn’t till seven days ago that the Senate confirmed the current budget director, Mick Mulvaney.

“There is not a snowball’s chance in the hot place that the frail GOP majorities on Capitol Hill will pass a giant Reaganesque tax cut financed with red ink,” says David now.

“Washington is at a fiscal dead end with a $20 trillion public debt already in place and $30 trillion baked into the cake by the middle of the next decade. And that’s under existing policy, before even a single dime of the Trump tax cuts or infrastructure stimulus is added to the equation. 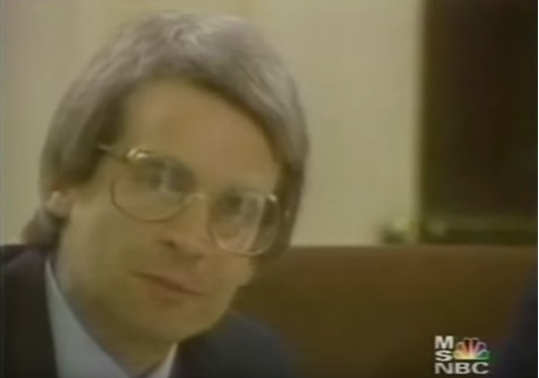 “Without a FY 2018 budget resolution, there will be no ‘reconciliation instructions’ on tax reform. Without the latter, the Senate will become a 60-vote, filibuster-driven killing field for tax reform.”

That’s serious enough… but in addition, “the Trump White House is already on the verge of a terminal political crisis,” David declares.

“After the travel ban fiasco, the Flynn resignation imbroglio, the massive anti-Trump leaks coming from the bowels of a hostile national security establishment and the renewed media campaign to re-litigate the 2016 elections over the Russian meddling canard, the incipient Trump administration is already mortally wounded.

“The ruling elites are determined to take The Donald down, and whether they succeed or not, it is extremely probable that Washington will grind to a halt — Watergate-era style — by early spring. There will be no giant tax cut, but there will be a news flash at some point soon crystalizing that very fact.

“Then the meltdown will begin, and the stock market will be bidless because all the robo-machines will be selling the news of breakdown, dysfunction, fracture and crisis in the Imperial City, not Donald Trump’s ‘hopium’ tweets.”