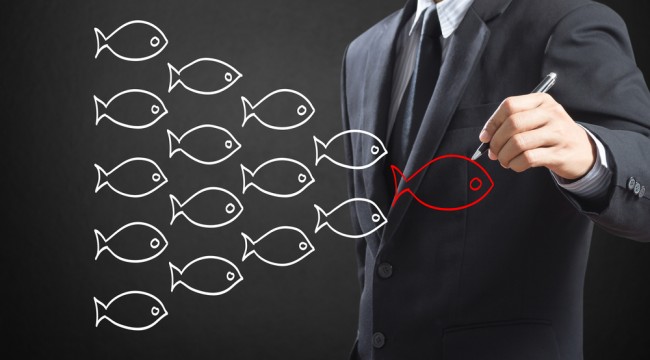 How to Profit On the Back of an "Activist Investor"

And it’s what Allergan Inc., the company best known for Botox, is doing in the face of a bid from hedge fund manager and activist investor Bill Ackman. Not that he can pull it off alone; he’s teaming up with Allergan’s bigger rival Valeant Pharmaceuticals to launch a bid worth $46 billion for Allergan.

Allergan doesn’t think that’s nearly enough. Hence, the poison pill: If anyone not approved by the Allergan board takes a 10% stake in the firm, other stockholders will get the right to buy discounted shares.

Ackman disclosed a 9.7% stake when he made the bid public yesterday.

The poison pill was the brainchild of a corporate lawyer named Martin Lipton — as the go-go era of corporate raiders and hostile takeovers reached its zenith in the 1980s.

And they’ve been effective: “These days,” The New York Times wrote last summer, “the directors of the 5,000 or so public companies have a better chance of being hurt in a car accident than by a hostile bidder.”

But that might be changing with Ackman’s move on Allergan. Once content to shake up sleepy corporate boards and remove complacent CEOs, Ackman now believes a hostile takeover with the right partner might prove the most effective way to “unlock shareholder value.”

Consider when Ackman took a stake in Federal Home Loan Mortgage Corp. — which you probably know better as Freddie Mac.

Like its fellow “government-sponsored enterprise” Fannie Mae, Freddie Mac was brought under federal control during the Panic of 2008. Shares were delisted from the New York Stock Exchange in mid-2010, but they continued to trade on the Over-the-Counter Bulletin Board.

“For years,” explains Rick Pearson of Agora Financial’s Catalyst Trader, “Freddie Mac was flat-lined. The real estate markets looked dead in the water. Then out of nowhere, shares shot up — doubling in a few days… and then went up to gains of 1,803%.” 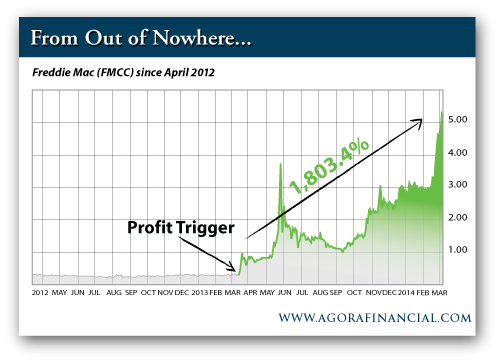 It all began a little over a year ago… when Ackman took a 10% stake in Freddie Mac. Mergers and acquisitions are No. 2 on the list of five “Newton’s Secret Profit Triggers” that Rick has identified — and made big gains from — during the last 10 years.

“Over and over again,” he explains, “we can spot these triggers, or a catalyst of some sort that will send a stock busting out to life-changing gains.”

The aforementioned housing rally is showing clear signs of flagging.

“Prices, arguably unsustainably high prices, are a major factor constraining sales of new homes, as they are for sales of existing homes,” says a dry but cogent summary from Bloomberg, “The median price surged 11.2% last month, to a record high of $290,000. Year on year, new home prices are up 12.6%. This compares with a year-on-year decline in sales — not a gain in sales — of 13.3%.”

The next downturn in housing prices “will show up any day,” says former White House budget director David Stockman at his lively Contra Corner website.

“In fact,” he says, “another downward plunge is a positive certainty now that the buy-to-rent LBO speculators are rapidly pulling out of those ‘flash’ bull markets in Arizona, California, Las Vegas, Florida and elsewhere.”

What he’s talking about is something our fearless leader Addison Wiggin has chronicled in Apogee Advisory for more than two years — the hedge fund and private equity crowd buying single-family homes, mostly foreclosures, to manage as rental properties.

That trend has now played itself out. “Yet,” writes Stockman, “even as Wall Street heads out of Dodge City, the normal wave of organic buyers is nowhere to be seen. That’s because the inexorable normalization of interest rates is already beginning to drive housing affordability even further south among the diminishing cohort of buy-to-occupy households with sufficient income to meet today’s financing standards.”

Yep. Eighteen months ago, a 30-year fixed mortgage could be had for less than 3.5%. This morning? 4.3%. Result? The percentage of homebuyers who are buying for the first time has cratered… 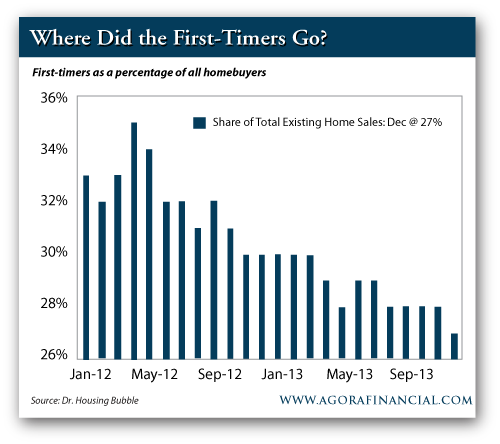 “This short-term flash boom in housing prices induced by Bernanke’s money printing spree,” Stockman sums up, “has driven first-time buyers out of the market.”

And no one’s stepping up to take their place…

Ed. Note: So what’s next for the US housing market? And how can you profit from it, regardless of the outcome? That’s exactly the kind of thing Dave talks about every day in the 5 Min. Forecast. In each issue he provides readers with expert analysis on a variety of topics – from resource and energy markets, to the housing markets and everything in between. And along the way, he drops in serious opportunities for readers to discover real profits. Make sure you’re on Dave’s incredible list of in-the-know investors and market experts. Click here now to find out more.