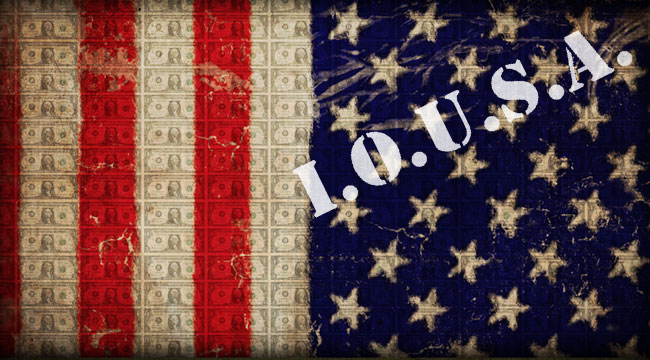 Have Credit-Based Money, Will Fail

Over the last 10,000 years, humans have tried two different kinds of “money.” They began with exchanges based on credit — “You give me a chicken… I’ll pay you back later, maybe by helping you build a new wigwam.”

Then, when society became too large and extensive, they switched to gold and silver. The advantage of this was obvious: You didn’t have to remember who owed what to whom. You could settle up right away. “You give me a chicken. I give you a little piece of silver. Done deal.”

Periodically, governments were tempted to go back to credit systems. Essentially, they issued pieces of paper — IOUs — and declared them “money.” Usually, these hybrid systems began with some collateral backing up the paper. Issuers typically had gold in their vaults and agreed to exchange the paper for metal at a fixed rate. Holders of the paper money were told that it was “good as gold.”

In some cases, people believed the IOUs were better than gold. When John Law began modern central banking in France, he backed his paper money with shares in a profit-seeking business — the Mississippi Co. You could take his scrip and imagine that it would grow in value along with the profits of the company.

Trouble was the Mississippi Co. never made any profit. It was a failure… and a fraud. Great prospectus. Few real investments. When people realized, they wanted to get rid of their paper money as soon as possible. In 1720, the system collapsed, and John Law fled France.

Later in the 18th century, the French tried again. This time, the revolutionary government backed its new paper money with revenues from the church properties they had seized. This didn’t last very long, either. The system blew up in 1796. Napoleon Bonaparte, on the scene at the time, declared, “While I live, I will never resort to irredeemable paper money.”

Richard Milhous Nixon didn’t seem to get the memo. In 1971, he changed the world monetary system. Thenceforth, it would be based on irredeemable paper money. We are now in year 42 of this new experiment with modern, credit-based money.

All right so far? Well, yes… as long as you don’t look too carefully.

When you have a system based on credit, rather than bullion, deals are never completely done. Instead, everything depends on the good faith and good judgment of counterparties — including everybody’s No. 1 counterparty: the U.S. government. Its bills, notes and bonds are the foundation of the money system. But they are nothing more than promises — debt instruments issued by the world’s biggest debtor.

A credit system cannot last in the modern world. Because as the volume of credit rises, the creditworthiness of the issuers declines. The more they owe, the less able they are to pay.

As time goes by, the web of credit spins out in all directions, entangling not just the present, but the future too. It stretches out over the entire society… one person owes another… who owes a third… whose debt has been pledged to a fourth… who now depends on it to pay a fifth… all calibrated in the IOUs of sketchy value from a sixth. Have you got that?

Total debt in the U.S. now measures more than twice what it was — in proportion to GDP — in 1971. And GDP itself has been goosed up by credit. Every time someone borrows money to spend… the spending shows up in GDP.

It looks great… on paper. There’s only so much gold. But there is no reasonable limit on how much of this new credit-based money you can create. As it increases, it gives people more spending power. GDP goes up. Employment goes up. Prices — especially asset prices — go up.

Naturally, everybody loves a credit system… until the credits go bad. Then they wish they had a little more of the other kind of money. Wise governments, if there are any, take no chances. They may feed the paper money to the people. But they hold onto gold for themselves. Throughout history, the most powerful governments were those with the most gold.

“Remember the golden rule,” they used to say. “He who has the gold makes the rules.”

When push comes to shove, governments need gold, not more IOUs with their presidents’ pictures on them.

Which brings us to the point of today’s Daily Reckoning.

Britain famously and foolishly sold much of its gold at the very worst time, at the end of the 1990s, when gold was trading at a 20-year low.

But how about the U.S.? Does it have any gold left? That is the question recently posed by Eric Sprott:

“Central banks from the rest of the world (i.e., non-Western central banks) have been increasing their holdings of gold at a very rapid pace, going from 6,300 tonnes in Q1 2009 to more than 8,200 tonnes at the end of Q1 2013. At the same time, physical inventories have declined rapidly since the beginning of 2013 (or have been raided, as we argued in the May 2013 Markets at a Glance), and physical demand from large- and small-scale buyers remains solid.

“As we have shown in previous articles, the past decade has seen a large discrepancy between the available gold supply and sales. The conclusion we have reached is that this gold has been supplied by central banks, which have replaced their holdings of physical gold with claims on gold (paper gold).”

Analyzing the gold sales figures over the last 12 years, Sprott noticed that there was far more gold sold than mined. Where did it come from?

Some of it is easily accounted for in jewelry and private holdings. But generally, the private sector is a buyer and an accumulator of gold, not a seller. And the quantities released to the market have been so great Sprott believes they could have come only from central banks.

But if they have sold such massive quantities over the last 10 years, how much do they have left? Maybe not much.

Which wouldn’t be surprising. Western central banks are committed to their credit money system. They intend to stick with it. And they know that unraveling this unruly skein of credit would be extremely painful.

Selling gold into the bull market of the last 12 years probably seemed like a very smart move. We’ll see how smart it was later, when the credit-based money system blows up.

Dear readers are advised to hold onto their gold. It’s the kind of money that works.

In today’s world, all money is debt… If all debt disappears, money disappears too…