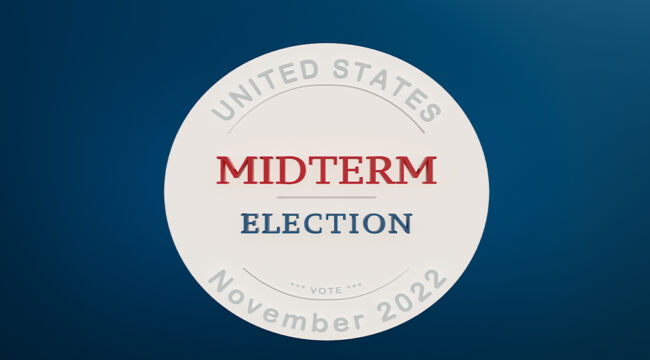 There are 435 seats in the House of Representatives (not counting nonvoting seats for D.C. and some U.S. possessions) and all of them are up for election in November. Right now, the Democrats control the House with 219 Democrats versus 211 Republicans (there are five vacancies).

It takes 218 votes to control the House. This means if the Republicans hold the seats they have and pick up just seven seats from Democrats, they will control the House. Will this happen? The 2022 election cycle is more challenging to predict than usual because it’s the first election since the 2020 Census that the House map had redrawn to reflect population gain or loss on a state-by-state basis.

The new district maps favor Republicans on the whole. Another factor favoring the Republicans is that voters often turn back to the party opposing the incumbent president, either out of dissatisfaction with their presidential choice or simply to balance the scales in ways that keep any one party from becoming too powerful.

The average loss for the president’s party in a first-term midterm since 1982 was 30 seats. If that were the only information I had, my forecast would be that the Republicans would gain 30 seats this November. That would put the House at 241 Republicans and 189 Democrats, a solid 47-seat majority.

Interestingly, a RealClearPolitics forecast based on the average of numerous polls has a forecast of 219 Republicans and 182 Democrats, with 34 seats in the too-close-to-call category.

If those toss-ups were decided in the same ratio as the likely winners (55% Republican to 45% Democrat), that would sort the undecided into 19 Republicans and 15 Democrats. That would produce a final House of 238 Republicans and 197 Democrats, almost exactly the result that the historical track record predicts.

But can we go beyond statistics and polls to discern idiosyncratic factors that could push the results away from the central tendency? There are two. The first is the trend of Hispanics and African-Americans toward Republicans and away from Democrats.

The Hispanic vote has historically been around 70% for Democrats, but recent polls show the Republicans may capture more than 50% of the Hispanic vote this time because Hispanics are trending conservative and are culturally anti-abortion, anti-crime and in favor of controlling the border.

Hispanics make up about 20% of the total population. If you shift 20% of voters by 20% in preference, that yields a 4% gain for Republicans in the overall vote. With many districts split close to 50/50, a four-point pickup is huge. We’ve already seen this dynamic with Republican gains in seats on the Texas/Mexican border that were solidly Democratic until this year.

A 10% gain in a 12% community adds another 1.2% to the Republican column. Crime and the economy are the big issues for African-Americans. Combined with the Hispanic shift, this could put over five percentage points in the Republican column, enough to tip a lot of close races to Republicans.

The second trend that could push the results away from statistical tendencies is Biden’s very low approval ratings. Right now, Biden’s approval rating is 41.8% based on the average of 11 major polls. However, the polls contained in the average include some conducted as long ago as Aug. 15 (Marist) or Aug. 12 (NBC News) when Biden was riding high based on some legislative accomplishments.

The more recent polls show Biden at 38% approval (Reuters, Aug, 30). So it is likely that Biden is in a real-time downtrend back toward the 39% level he held most of the summer.

Based on these idiosyncratic variables, it seems reasonable to push the expectation of 241 Republicans and 189 Democrats to an adjusted result of 245 Republicans to 185 Democrats, a 34-seat gain for Republicans, leading to a 60-seat Republican majority.

Forecasting the outcome in the Senate is both easier and harder than forecasting the House. It’s easier because there are fewer races and even fewer contests that are genuinely competitive. It’s harder because the smaller sample size makes it more difficult to use statistical methods. We have to go state by state and candidate by candidate to produce an accurate forecast.

The Senate has 100 members, two from each state. The current split is 50 Democrats/independents and 50 Republicans. Under the Constitution, the president of the Senate, Kamala Harris (the vice president), can break a tie vote.

This puts the Democrats in control of the Senate even with the 50/50 split.

There are 35 Senate seats in play this election. The Republicans are at a slight disadvantage going in because they currently hold 21 of the 35 seats being contested, whereas the Democrats only have to defend 14 seats. The good news for Republicans is that 16 of the 21 seats they are defending are rated “Solid” or “Likely” to stay Republican by The Cook Political Report.

The Democrats have nine out of 14 seats they are defending rated “Solid” or “Likely.” This means that only 10 of the 35 Senate seats in this election are truly competitive. Control of the Senate will come down to those 10. The Republicans and Democrats currently hold five of the competitive seats each.

To control the Senate, either party has to hold their five competitive seats and take one from the other party. If you lose a seat, you have to pick up another just to stay even. It’s that close.

My current best estimate is that Republicans will retain Florida, North Carolina and Ohio. Likewise, the Democrats should retain their seats in Colorado and New Hampshire. This means control of the Senate comes down to Arizona, Georgia, Nevada, Wisconsin and Pennsylvania.

If that list seems familiar it should. Those were the same five states that were hotly contested in the 2020 presidential race. All five went for Biden. Although those remaining races are all close, I rate Nevada and Georgia as wins for Republicans.

Those two wins represent a pickup of two Senate seats for Republicans since both are currently held by Democrat incumbents. I rate Arizona a win for Mark Kelly, which is a hold for the Democrats.

Wisconsin and Pennsylvania are both extremely close, but right now one would have to rate those as wins for the Democrats. That’s a pickup of two for the Democrats since both seats are currently held by Republicans.

If that forecast holds, we’re back to a 50-50 Senate. A few states would change from Democrat to Republican (Nevada and Georgia) or from Republican to Democrat (Wisconsin and Pennsylvania) but the total 50-50 split would be unchanged.

I have one other forecast: The current forecast will change. They always do when you’re still two months away.

We could see Arizona, Pennsylvania and Wisconsin tip Republican over the next two months. Georgia could remain in the Democratic column. All I can say is I’ll be watching closely and keeping you updated every step of the way.

A prudent investor would keep an above-average allocation to cash, both to withstand the volatility from potential wild cards and to profit from attractive entry points on certain assets while others are losing fortunes.

Strap in, it’s going to be a bumpy but fascinating ride.