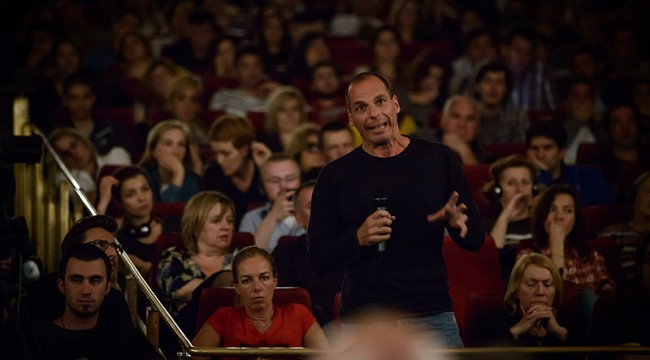 “UGH!” was the pithy assessment this morning of our friend Chuck Butler, managing director at EverBank Global Markets.

“There are other things going on in the world with the currencies and metals,” he writes in his Daily Pfennig. “It just seems like it’s all about this Greek stuff.”

Our own Jim Rickards, tweeting from London, is in broad agreement…

Alas, your editor realizes that’s probably not good enough for you, dear reader. After all, you’re inundated with Greece on the hourly AM radio news, on Drudge, wherever it is you turn for a headline fix. And then you turn to The 5 for perspective. We’d be falling down on the job if we merely said, “Move along, nothing to see here” — even if there’s nothing to see here.

And so we press on…

“So now the ugly starts,” Chuck Butler says of relations between the Greek government and its European creditors.

As we mentioned earlier this year, the current act of the Greek drama differs from the 2011-12 act in one major way — the German and French banks no longer hold much Greek government debt.

But Greek banks do. And they’re in a world of hurt. They count on emergency loan assistance — ELA — from the European Central Bank. “I would have to think that this ‘no’ vote is a nail in the coffin for ELA continuance,” says Chuck.

Thus the Greek bank holiday that started last Monday won’t end tomorrow as first planned. And talk of a Cyprus-style “bail-in” is underway.

Indeed, the talk this time is much more drastic. When Cyprus blew up in 2013, the only bank deposits that got a “haircut” were those over the deposit insurance limit of 100,000 euros. Bad news for Russian oligarchs hiding their money in Cyprus, but not the end of the world for everyday Cypriots.

Not so much in Greece, if rumors passed along by the Financial Times over the weekend prove true. Deposits over 8,000 euros — about $8,800 — would be subject to a 30% confiscation. Prudent Greeks who’ve saved up three-six months of living expenses for an emergency and keep those savings in a bank would suddenly have only two-four months. Ouch.

“The next day that will loom large for Greece is July 20,” says Chuck Butler. Two weeks from today.

That’s the day we told you way back in April is really worth watching. On that day, the Greek government is due to pay 3.5 billion euros to the European Central Bank — a much tougher creditor than the International Monetary Fund, which got stiffed by Greece last week.

“I still think there will be an olive branch here,” Chuck tells us, “and a negotiation with an agreement in the next couple of days.”

That dovetails with Jim Rickards’ longtime assessment: The euro is more a political than economic project. So European leaders are highly motivated to keep Greece in the fold — using as much chewing gum and baling wire as it takes.

“Both sides still have the same interest in a negotiated solution because both sides have far more to fear from failure than from a few more concessions,” Jim writes in an original essay for today’s Daily Reckoning.

“The surprise resignation of the Greek finance minister, Yanis Varoufakis, will relieve some of the personal animosity and make resumed negotiations easier.”
Oh Yanis, we hardly knew ye. The man brought much-needed excitement to what our executive publisher Addison Wiggin calls “the longest, most boring financial crisis in history.”

Varoufakis: It was fun while it lasted…

When Varoufakis took office five months ago, he swore Greece was done taking on new debt to retire old debt: “We have resembled drug addicts craving the next dose. What this government is all about is ending the addiction.”

So much for that. With Varoufakis gone, the rest of the Greek government can stumble back to the negotiating table in search of the next hit.

If he writes a memoir, it promises to be loads more entertaining than the bilge Ben Bernanke will dump on us this fall…