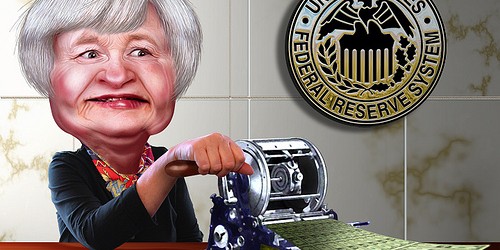 How the Fed Is Fooling You Again​

Richmond Fed President Jeffrey Lacker told the Washington Post that the chance of a June rate hike was “pretty strong.”

And New York Fed President William Dudley said a June rate hike is a “reasonable expectation” based on the economy’s strength.

So, is Mao Yellen really going to turn off the easy money spigot that’s been keeping stocks at all-time highs and Wall Street bankers flush with cash?

The Only Data That Matters

She dresses up as a no-nonsense public servant driven only by objective data. And under her leadership, she’s constantly spinning that the Fed has never been more “data dependent.”

Yellen’s fair-minded Fed is supposedly not influenced by the short-term gyrations of the S&P 500 Index.

It only relies on “clean” domestic data on labor markets, inflation and economic growth to determine U.S. monetary policy.

And when that data says it’s time to adjust rates, that’s what the Fed does.

Except when it doesn’t.

You see, it’s true that Yellen’s Fed is data dependent.

But it’s mostly dependent on one piece of data. And that’s the performance of the stock market.

In December 2015, the Fed raised interest rates for the first time in six years. And it indicated more increases were on the way…

The Fed said four rate hikes would happen in the coming year if core U.S. inflation went higher than 1.6% and unemployment hit 4.7% by the end of 2016.

Well, inflation had already hit the Fed’s target before its March 2016 meeting.

And unemployment was also well on its way to the 4.7% year-end target.

In other words, the data had only made a stronger case for higher rates.

So why did the Fed leave rates unchanged in March?

“Buy and hold” investors panicked at the thought of their easy money going bye-bye.

They had already seen the collapse of Chinese stocks and oil, but the S&P plummeting caused a “Code Red.”

And the Fed blinked. It put rate increases on hold despite enormous economic data indicating it was time for a rate hike.

Keep this “process” in mind the next time Yellen pretends her next move will be based on noble economic principles or “data only” models.

Sure, the Fed says it pays attention to inflation and economic stats. But its one guiding principle since March 2009 is to levitate the S&P at any cost.

And how could that not be the truth? Take a look at this chart. Fed interventions are perfectly correlated with stocks going to the moon. 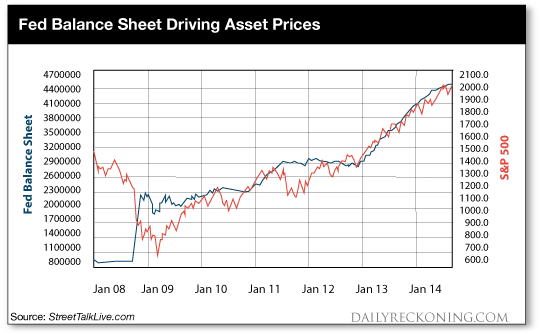 The Fed is petrified of bursting the stock market bubble it inflated.

That’s why Yellen is paying super close attention to stocks.

As my friend and legendary investor Marc Faber said recently about the possibility of a June rate hike:

If we are, in June, 10 to 20 percent lower in stocks and bond yields are up, [the Fed is] not going to move. If, on the other hand, the market is relatively stable and moves up from here, maybe not to new highs but above 2,000 on the S&P, they will probably move.

Marc looks to be spot on here. But how do you bet on the next Fed move?

As an investor, you can always continue to play along with constant Fed spinning about its supposed reliance on broad economic data.

Or you can ignore their noise and opt out of the guessing-game silliness altogether.

Because opting out is what trend following is all about.

Look, the Fed is going to continue its charade no matter what. And lemmings will continue to see their accounts decimated in never ending “bubble build, bubble pop” cycles.

Will rates go up? Down? Stay the same?

I don’t care (except it would be nice to still have the concept of interest income).

But with trend following, you pay attention to only what’s happening with the market price to make money.

Being jerked around by Yellen and her minions is no way to live life.

Trend following allows you something else: investing with dignity.

Please send your feedback to coveluncensored@agorafinancial.com. I want to know what you think.