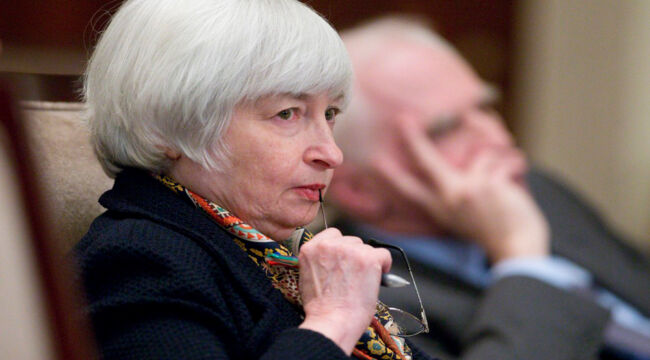 “If we ended up with a slightly higher interest rate environment it would actually be a plus for society’s point of view and the Fed’s point of view.”

A higher interest rate environment would likely arise from a higher inflation environment.

Inflation is presently on the jump.

Is it “transient” as the Federal Reserve insists? Or is it a mere foretaste of inflation to come?

Expert opinion divides. Yet we would like to ask Ms. Yellen this question:

Gradually falling prices — a lovely deflation — are the telltales of economic progress.

Falling prices stretch the dollar in a fellow’s wallet. His dollar fetches him more goods each year that passes… taking the average.

Should we sob over the declining prices of computers, Madame Treasury Secretary?

Today’s computers run laps and laps around the 1972 computer — and at the price of only several hundred dollars.

Are the inflationists yelling blue murder? Why not?

This particular model is no longer on offer. But you can take home today’s version — a far more formidable version — for under $1,000 (deluxe versions cost greater).

Yet should it go for even less money than it does?

Inflation has chewed its way through the dollar at an average 2.33% each year — yielding a cumulative 105% price increase.

We are the collective victims of a camouflaged swindle, a slow but steady pocket-picking, a creeping larceny.

Which version would you prefer? Did you answer the $500 version?

Then off you go to the Ivy Leagues for remedial economic instruction. You must come to appreciate inflation’s blessings — and deflation’s curses.

Both Right and Wrong

Yet let us scrutinize Ms. Yellen’s claim that “a slightly higher interest rate environment would actually be a plus for society’s point of view.”

Is it possible to be both right… and wrong… at once? It is, yes.

Higher rates are not generally bad. Higher rates are usually associated with stronger growth. They mean that growing businesses are competing for funds and willing to pay more to get them. Banks can pick and choose from among borrowers and charge higher rates as a result. In short, higher rates can signal a strong economy.

What is more, higher interest rates attract savings. And economic growth rises from a bedrock foundation of savings.

Savings form the granite core of all investment, all consumption.

But today’s “economy” does not rest upon the bedrock of savings. It rests rather upon the sand of artificially low rates.

Any substantial increase in interest rates could knock it down.

No Room for Rising Rates

Consider the impact of rising rates on the public finances alone. As we have explained before…

Since 2007, total United States debt… public and private… has ballooned an impossible $30 trillion.

How much heavier? Mr. Larry McDonald, publisher of the Bear Traps Report:

You just have… a ton of wealth that a… 1% move up in yields, number one, it bankrupts the U.S. in terms of your budget right now…. 70% of the budget in the United States is entitlements and interest, so you just can’t afford a big move up in yields.

The Fed Has Killed the Bond Market

The bond market gives the master signal to the stock market and the overall economy.

The monetary and fiscal authorities cannot sit upon their doofus hands if rates climb notably.

They will reach deeper yet into their trick bag to magic them down — through “yield curve control,” for example.

If inflation menaces, the bond market has traditionally shouted a warning.

But today’s bond market is not the reliable inflation detector it once was.

That is because the Federal Reserve has distorted, garbled, jammed and censored its signals.

The Federal Reserve has the bond market transmitting static.

Investors who depend upon its clear telegraphing fumble about, lost.

The bond market is not working the way it has in the past because the Fed is artificially manipulating interest rates. The biggest buyer (of Treasuries) is the Federal Reserve…

The Fed is… trying to influence the economy, stimulate the economy, prop up the stock market. That is the purpose of the Fed buying Treasury bonds…  And so when you have the Fed in the market, the whole thing is distorted… The bond market is broken. You can’t look at the bond market.

We do not know.

“I Don’t Believe They’re Going to Screw It Up”

Yet this we do know:

“We think that most countries have fiscal space,” she states. “Most countries” — we presume — include the United States.

But what if inflation proves not transient, but permanent? What if interest rates break through the Federal Reserve’s cordon?

The lady sloughs off all concerns, all, worries, all fears:

“I don’t believe they’re going to screw it up.”

But as the wags at Zero Hedge remind us:

“This is the same clueless hack who in 2017 said she doesn’t expect another financial crisis in “our lifetimes.””