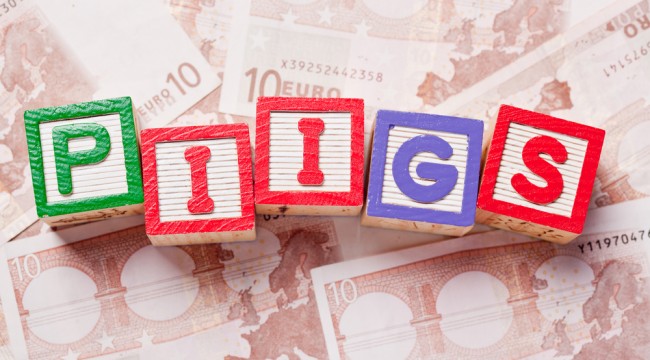 Europe Continues to Circle the Drain

Europe continues to flounder, with several countries still in recession. “More stimulus!” is the cry heard ’round the world by Keynesians such as Paul Krugman, who has called alleged austerity in Europe “deeply destructive.” They argue that dreadful cuts in spending have ruined growth in the PIIGS countries facing the highest debt burdens and worst recessions. Krugman, of course, is endlessly calling for more government intervention, even claiming an alien invasion would improve the recovery. “For those that don’t already know,” said Gary Gibson in The Daily Reckoning last month, “Paul Krugman is an especially obnoxious itch to any mind dedicated to good economic theory.”

Citing Georg Erber, according to Paul Roderick Gregory at Forbes, “Austerity is everywhere but in the statistics.” He continues:

“Between the onset of the crisis in 2008 and 2011, PIIGS government spending increased by 6% from an already high plateau. Eurostat’s projections (which make the unlikely assumption that the PIIGS will honor the fiscal discipline promised their creditors) still show the PIIGS spending more in 2014 than at the end of their spending binge in 2008.”

Where is the austerity? The cuts Keynesians are complaining about are mere reductions in increase.

“Despite austerity rhetoric,” wrote Frank Karsten in The Daily Reckoning on June 10, “government debts keep rising in most democratic countries. ‘Austerity’ is a code word for ‘spending less than we had wanted, but more than in the past.’ In the end, they wind up raising taxes, rather than lowering expenditures to cut deficits.”

As we reported last week, central banks around the world continue to cut their euro holdings for the third straight year. The Old World’s scrip now accounts for only 23.3% of foreign reserve holdings. If central banks are wary of euros… you should be as well.

P.S. “If your focus is on where you can get the most from your dollar– then you have to look at Europe,” says Chris Mayer, editor of Capital & Crisis. Chris has some great insight into the best investment opportunities that the markets are missing. Find out what he has to offer… click here.

The United States Is Going Broke

When debt constantly runs ahead of GDP, bankruptcy is the ultimate result… and one controversial way to inflate our way out of the problem…