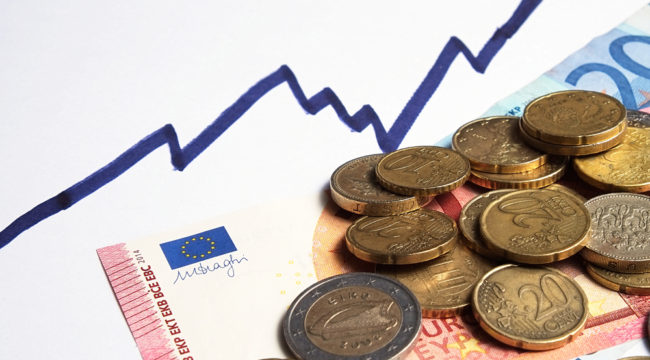 A resurgence in the euro after recent elections in Europe could leave it top dog in global currency markets. Understanding what that means for the U.S dollar will be pivotal for investors that operate in greenbacks.

Bloomberg’s recent headline “This Could be the Euro’s Best Year in a Decade” shows signs that all eyes are watching Europe.

Currently, the Euro has smashed to a six-month high with aggressive talk coming from the central banking crowd on the European continent.

German Finance Minister Wolfgang Schaeuble, arguably one of the most influential voices in Europe, said that he views the need to further increase in integration in Europe. The German minister went so far as to hint at creating a “parliament” for the euro currency bloc.

In international currency exchanges things are beginning to change. The world’s major reserve currency, the U.S dollar, has seen investors begin to wake up to the reality of a lackluster expectations from the White House.

Impact of the U.S Dollar on Europe

The U.S dollar is now back to levels prior to the November election.

Does that mean a the euro currency surge caused it? No.

Could it signal that Europe is positioned to gain the most from a weakening dollar? Yes.

The long dollar positions once favored with expectations of an economic stimulus package have since faded. The dreams of Wall Street and the Trump-trade are officially dead.

As David Stockman, the former Budget Director under Ronald Reagan discloses, “The very idea that there is going to be smooth hand-off of the “stimulus” baton to a giant Trump tax cut is by now just ludicrous. Its persistence is evidence we’ve reached the stage in the bubble cycle where Wall Street stock pushers have already gone full George Orwell.”

Stockman, a Wall Street insider tells, “They are now claiming a deflating economy is bouncing back and that soft earnings are blowing the lights out. That is to say, when the bubble reaches its manic peak, the lies and hopium become outright comical.”

What this means is that not only is the dream of a stimulus package a failure, but that the political environment is pushing risk higher in the U.S.

What Wall Street can’t, or won’t, see can still hurt it.

U.S volatility has hit a 21-month high with relative comparisons to the euro. At the center of the polar shift is the political cloud hanging over American markets in contrast to calmed investors following elections in France and other euro members.

Look at the euro today versus where it was in November and it shows a more clear picture.

The outlook following the U.S election was very poor on the euro. There was a considerable amount of concern from markets over the rise of nationalist policy, elections and even the perception of slow economic growth in the Eurozone.

Since the election a different story has filled Europe.

The euro is officially up six percent since the beginning of the year and projected to rise even further. Some estimates have the euro currency pushing past levels not seen since the global financial crisis began.

For central bankers, watching Europe will be as important as ever.

Forward guidance has been an area of much contention in Europe. As a measure of policy the European Central Bank (ECB) has allowed public verbal assurances on what forthcoming policy would be. By doing so they were mitigating market disruptions and any risk to asset prices.

Speaking in typical “cypher” language the head of the ECB, Mario Draghi, said,

In a word — no. Draghi does not intend, for the time being, to change the position of the bank.

Stimulus from the ECB and member states (particularly France and Germany) will be important to watch. It could signal greater strength in the euro, and ultimately greater confidence of Eurozone members toward the longevity of the single currency system.

Currently the ECB continues its asset-purchase program of €60 billion per month. This is the lifeblood of quantitative easing in 2017.

Any shift in those two policies could be significant factors in the European economy. For now, the euro currency is crucial in its ability to bring Europe closer together. Even more important is where it is currently valued.

Evaluating the level of purchasing power parity (PPP) models from the OECD estimates show that the Euro to U.S dollar have the euro being undervalued and the dollar overvalued. 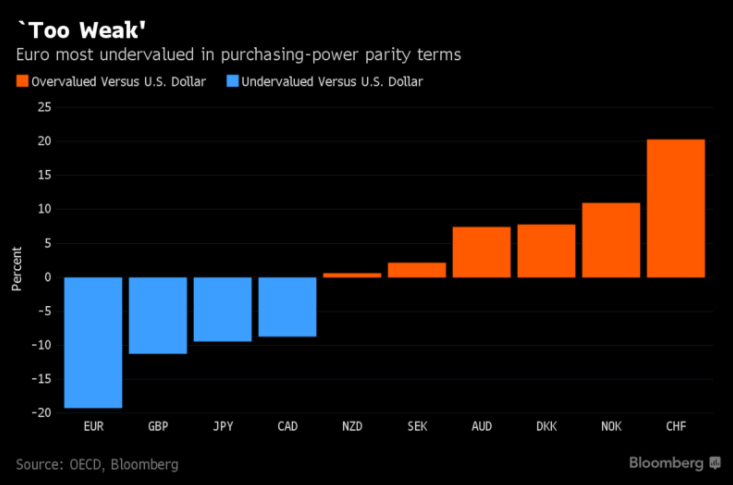 With a stronger euro, the More Europe philosophy appears to be gaining strength.

“Ever since the European sovereign debt crisis emerged in 2010, I’ve been fighting a losing battle trying to convince investors that the Eurozone is here to stay. The euro is the most sound fiat currency in the world.”

Rickards indicates that the recent solidarity amongst the Eurozone means it is here to stay.  More Europe means the possibility of more action, not toward dividing power but uniting it.

“The EU and the Eurozone have always been political projects, not economic. Politics is the art of the possible. The leaders of Europe knew they would need a common fiscal policy and a single-bond market eventually…”

It’s possible that German Finance Minister Schaeuble and fellow leaders could be headed for a Eurozone Finance Ministry. Such conditions would bring a more unified fiscal policy for the European project.

That means for investors tied to Europe, and those with money in currency markets, the expectation should be a stronger, more sustained euro.

While economists and various experts might squabble over methodology, buying the facts and not the rumor on the Eurozone can leave for a healthy position.