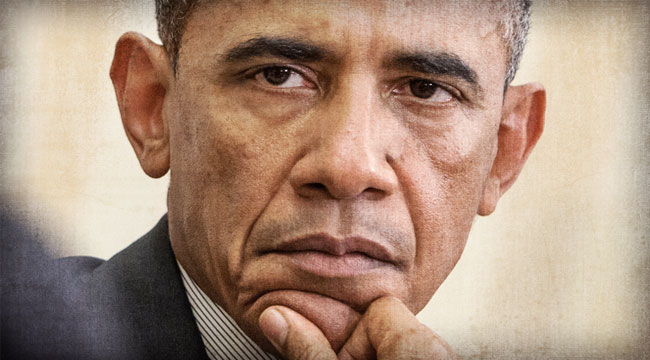 Don’t Blame Obama (He Has No Power)

The genius H.L. Mencken put it best when he wrote that “every election is a sort of advance auction sale of stolen goods.”

We also like the one from P.J. O’Rourke, who wrote…

“If voting made a difference,” he said, “they wouldn’t let us do it.”

Until now, this area of debate has been reserved only for the fringes. The question of whether or not to vote, that is. Or if voting is actually effective in changing governmental policy (the answer? No).

As you’ll see in a moment, though, this debate is slipping into the mainstream. And in a very big way.

“From the NSA’s warrantless wiretapping to Guantanamo Bay to the Patriot Act, candidate Obama was a defender of civil liberties and privacy, promising a dramatically different approach from his predecessor.

“But six years into his administration, the Obama version of national security looks almost indistinguishable from the one he inherited. Guantanamo Bay remains open. The NSA has, if anything, become more aggressive in monitoring Americans. Drone strikes have escalated. Most recently it was reported that the same president who won a Nobel Prize in part for promoting nuclear disarmament is spending up to $1 trillion modernizing and revitalizing America’s nuclear weapons.”

“It has long been the province of conspiracy theorists,” Mickey Edwards writes in a separate article in the Globe, “to claim that the real power of government is not wielded by the obvious practitioners of statecraft — presidents, members of Congress, the judiciary — but by secret or semi-secret entities, real wizards whose hidden machinations send us to war, sell us out to enemies, siphon public treasure into private hands.

“Depending on your talk show or paranoia of choice, these are the bankers, oil barons, one-worlders, war profiteers, Bilderbergers, Masons, Catholics, Jews, or Trilateralists. Our formal institutions, in this scenario, are stage sets, Potemkin villages; our officials are puppets; we are an unsuspecting audience.”

Yes, there are countless ways to say the government is corrupt.

At their core, all these theories have a “shadow government” of sorts running things behind the scenes.

And, according to one highly regarded professor, that might not be too far from reality.

“Why,” Glennon poses the question, “does national security policy remain constant even when one president is replaced by another, who as a candidate repeatedly, forcefully, and eloquently promised fundamental changes in that policy?”

To be sure, Glennon is not a name uttered in conspiracy circles.

He’s a respected professor of international law at Tuft’s Fletcher School. He served legal counsel to the Senate Foreign Relations Committee. And he’s a respected academic in several Ivy-League institutions.

In his new book, says the Globe, “he catalogs the ways that the defense and national security apparatus is effectively self-governing, with virtually no accountability, transparency, or checks and balances of any kind. He uses the term ‘double government’: There’s the one we elect, and then there’s the one behind it, steering huge swaths of policy almost unchecked. Elected officials end up serving as mere cover for the real decisions made by the bureaucracy.”

The U.S. government is run with, Glennon says, “a bifurcated system — a structure of double government — in which even the president now exercises little substantive control over the overall direction of U.S. national security policy.”

The result of this double government, he says, is a system that marches relentlessly “toward greater centralization, less accountability, and emergent autocracy.”

Of course, Glennon didn’t come up with the idea of a double government…

Glennon’s theory (and the theory of nearly every modern conspiracy theorist on Earth) originates with notes from an English scholar named Walter Bagehot back in the 1860s.

But, says Glennon, we the public are part of the problem. And the only possible purveyors of a solution.

And, he tells us, we’re in serious danger of becoming comfortably ignorant as to what the government’s role actually should be — and when they’re overstepping their bounds.

As Glennon notes, “the term Orwellian will have little meaning to a people who have never known anything different, who have scant knowledge of history, civics, or public affairs, and who in any event have never heard of George Orwell.

“I think the American people are deluded… that the institutions that provide the public face actually set American national security policy. They believe that when they vote for a president or member of Congress or succeed in bringing a case before the courts, that policy is going to change.

“Now, there are many counter-examples in which these branches do affect policy, as Bagehot predicted there would be. But the larger picture is still true — policy by and large in the national security realm is made by the concealed institutions.

“The ultimate problem is the pervasive political ignorance on the part of the American people. And indifference to the threat that is emerging from these concealed institutions.

“That is where the energy for reform has to come from: the American people. Not from government. Government is very much the problem here. The people have to take the bull by the horns. And that’s a very difficult thing to do, because the ignorance is in many ways rational. There is very little profit to be had in learning about, and being active about, problems that you can’t affect, policies that you can’t change.”

Speaking of profit, nowhere is there more proof of the double government than in the military-industrial complex…

And its clear priority over… well… everything.

The latest example is the disproportionate amount of action in the Middle East versus in West Africa.

Not that we condone either actions from the government, of course.

As we already saw in the case of Firestone, the private sector is much more competent at handling Ebola. And it should be encouraged to do so.

And, of course, ISIS is a frankenstein largely of the U.S. military’s creation.

But the reason Ebola has gotten the shaft over ISIS is obvious: There are no high-dollar contracts to shuffle in the fight against Ebola.

Until, of course, Ebola gets completely out of control and the government can justify vaccinating whole populations (cha-ching!).

Again, stopping this outbreak could’ve been as simple as sending bleach, gloves, gowns and goggles to healthcare workers when they needed them. Now it’s a little more complicated.

All the more reason you should prepare for the worst (more on that in a moment).

Unfortunately, nearly 400 Africans have died of Ebola just in the past six days…

And those are just the deaths that went reported.

And the manufacturing plants that create Ebola preparedness kits are already feeling the pinch.

“The plants, which make gowns and other protective equipment that medical staff need to treat Ebola patients,” The New York Times reports, “have hired extra workers to make sure the machines can run all night.

“We are not at our maximum capacity yet,” Judson Boothe, senior director of products supply for Halyard Health told the rag.

“But we’re getting closer every day.”

Judson also added that they hit max cap during the SARS outbreak — so a supply crunch in the future isn’t even close to out of the question.

According to Medline spokeswoman Kathryn Cummings, demand for specialized Ebola kits is up tenfold in just the past month.

“We receive 30 to 40 calls a day inquiring about our kits,” Dant Tisci, president of one of Medline’s manufacturing division told the Times.

Officials are now saying it could take six months to fully contain Ebola. We’re certain we haven’t seen the last case in the U.S.

Ed. Note: Laissez Faire just released their Ultimate Pandemic Survival Guide exclusively to their readers. Over 240 hours of research and writing went into this project. It contains everything you need to know about Ebola. Follow the instructions inside, and you’ll be armed and ready for anything as soon as this weekend. To receive access to this guide, you need to sign up. Click here to sign up for FREE now.