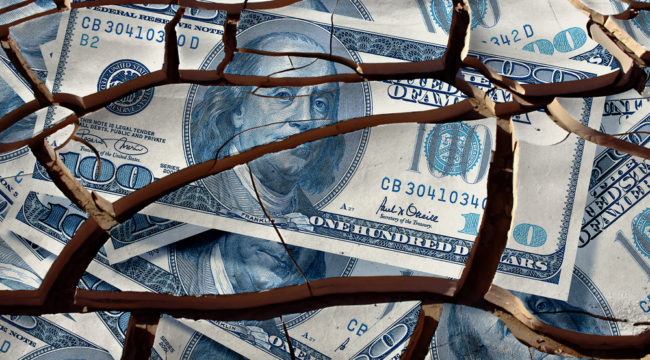 Then the Gods of the Market tumbled, and their smooth-tongued wizards
Withdrew, And the hearts of the Meanest were humbled and began to believe
It was true That All is not Gold that Glitters, and Two and Two make Four
And the Gods of the Copybook Headings limped up to explain it once more.
— Rudyard Kipling, 1919

When the Bretton Woods international monetary system broke down in 1973, the world’s financial officials were unable to agree on a new set of rules to regulate international trade and monetary relations. Instead, a new system began to emerge without formal agreement or sanction. It also remained nameless.

The current international monetary system which evolved out of the collapse of Bretton Woods will be referred to as the dollar standard — so named because U.S. dollars have become the world’s core reserve currency in place of gold, which had comprised the world’s reserve assets under the Bretton Woods system as well as under the classical gold standard of the 19th century.

The primary characteristic of the dollar standard is that it allowed the Unites States to finance extraordinarily large current account deficits by selling debt instruments to its trading partners instead of paying for its imports with gold, as would have been required under the Bretton Woods system or the gold standard.

In this manner, the dollar standard has ushered in the age of globalization by allowing the rest of the world to sell their products to the United States on credit. This arrangement has had the benefit of allowing much more rapid economic growth, particularly in large parts of the developing world, than could have occurred otherwise.

It also has put downward pressure on consumer prices and therefore interest rates in the United States, as cheap manufactured goods made with very low-cost labor were imported into the United States in rapidly increasing amounts.

However, it is now becoming increasingly apparent that the dollar standard has also resulted in a number of undesirable, and potentially disastrous, consequences.

First, it is clear that the countries that built up large stockpiles of international reserves through current account of financial account surpluses experienced severe economic overheating and hyperinflation in asset prices that ultimately resulted in economic collapse.

Japan and the Asian Crisis countries are the most obvious examples of countries that suffered from that process. Those countries were able to avoid complete economic depression only because their governments went deeply into debt to bail out the depositors of their bankrupt banks. Now China’s facing a similar crisis.

Second, flaws in the current international monetary system have also resulted in economic overheating and hyperinflation in asset prices in the United States, as the country’s trading partners have reinvested their dollar surpluses in U.S. dollar-denominated assets.

Third, the credit creation that the dollar standard made possible has resulted in over-investment on a grand scale across almost every industry. Over-investment has produced excess capacity and deflationary pressures that are now undermining corporate profitability around the world.

The U.S. economy is faltering under the immense debt burden of its corporate and consumer sectors. The rest of the world has grown reliant on exporting to the United States and has allowed the United States to pay for much of its imports on credit.

In order to prevent their currencies from appreciating, many central banks around the world created their own money and used it to buy the dollars entering their economies as a result of their trade surpluses with the United States.

The trading partners of the United States face the choice of continuing to invest their dollar surpluses in U.S. dollar-denominated assets despite very compelling reasons to doubt the security of such investments, or else converting their dollar surpluses into their own currencies, which would cause their currencies to appreciate, and their exports and economic growth rates to decline.

Neither choice is appealing, particularly considering the economic fragility of most of those countries and the huge amounts to finance the U.S. current account deficit.

In recent years, severe boom-and-bust cycles have wrecked the financial systems and government finances of countries with large balance of payments surpluses: excessive credit creation has fueled overinvestment and culminated in strong deflationary pressures around the world.

And the reinvestment of dollar surpluses into dollar assets has facilitated reckless debt expansion in the United States that has impaired the creditworthiness of its corporate and consumer sectors to such an extent as to preclude that country from continuing to serve as the world’s engine of growth.

In short, the world economy is in a state of extreme disequilibrium. The flaws in the international monetary system are responsible for that disequilibrium. Those imbalances will ultimately culminate in a collapse in the value of the U.S. dollar and a continued worldwide economic slump.

The system must eventually change. The only question is how painful the transition will be.