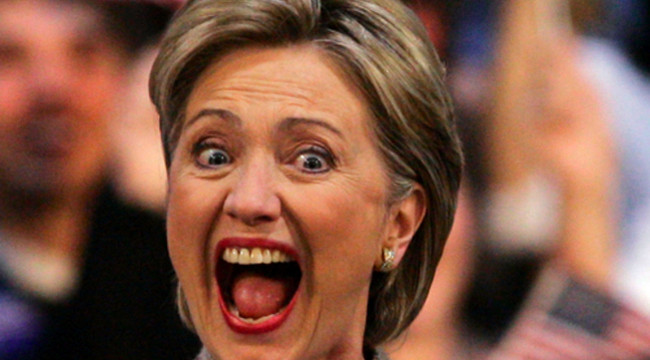 The Devil Is Coming to the White House

At this weekend’s White House Correspondents Dinner, President Obama made a prediction:

“Next year at this time, someone else will be standing here in this very spot, and it’s anyone’s guess who SHE will be.”

You know I’m not a fan of predictions, but he’s probably right.

Considering that more and more Americans support socialism, are looking for “freebies” from the government, and expect someone else to take care of them…

I think Hillary has a fantastic shot at the White House. And then Slick Willy can get back to the intern business.

Oh, and if you thought Obama was bad, just wait until Wall Street’s Devil in Prada assumes control of the Oval Office.

Mark Twain once said: “Politicians and diapers must be changed often, and for the same reason.”

It’s no secret that politicians lie.

It’s what they’re designed to do.

Not sure if that beats President Bill Clinton’s now classic, “I did not have sexual relations with that woman, Miss Lewinsky.”​

Obama also lied when he promised that Obamacare would reduce healthcare premiums by $2,500 per year.

Instead, average premiums have skyrocketed. For some groups, the rate hike has been as much as 78%.

And he lied when he said: “I didn’t raise taxes once.”

Obamacare is jam-packed with more hidden taxes than we can count… or even figure out.

And it’s not just Obamacare.

A few years ago, he said: “We have to turn the page on the bubble and bust mentality that created this mess,” referring to the 2008 financial collapse.

But he knows damn well how that mess was created.

He knows the Federal Reserve is responsible for the bubbles and the busts of the last 15 years.

And if you think he’s bad, just wait until you see Hillary in the White House…

When she gives a speech, the lies come so fast and so furious, I can’t keep track. An encyclopedia of Hillary lies might be a bestseller… or just useful as toilet paper.

Are You Ready for the Deep State’s Candidate?

Look, I think Hillary is a certified crook. From the cattle futures scam in the early days to the $153 million paid to her and Slick Willy over the last 15 years by Wall Street banks, it’s corruption on par with the Sopranos.

What’s really shocking is that she has a real chance at getting to the White House… even though her email scandal should have already put her in prison.

But not so fast…

Is there a glimmer of hope?

At this point, it could go either way.

But Trump isn’t just up against Hillary.

He’s also up against the immensely powerful Deep State.

You see, for the past few decades, it hasn’t really mattered who was in the White House.

Presidents are mere marionettes controlled by the Wall Street bankers, the big corporations and the military industrial complex.

They give orders. Our elected “representatives” obey… then check their bank accounts for their snack money.

This year could be different, though.

Trump is a wild card. Nobody knows if he will take orders from the Deep State. And the powers that be are clearly concerned Trump might take their power levers.

Meanwhile, Hillary is the establishment candidate. Even noted libertarian Charles Koch is touting her. She has been vetted by the Deep State and has amassed a massive fortune for her loyalty.

However, if Trump can unmask her as the crook she is, maybe he’ll have a chance. But it’s going to be a tough fight.

He’s up against a massive amount of vitriol. Have you seen the Trump protest videos? They’re loaded with topless girls screaming expletives, Mexican flag waving and the destruction of police cars. It’s a sad narrative about modern day America.

But don’t get me wrong.

I’m not ruling out Trump.

I’m simply pointing out the system is rigged. It’s likely we’ll just get more of the same in the next eight years.

More government boondoggles, like negative interest rates that will hurt retirees and the middle class.

And there’s nothing you can do to change that.

The best we can do is to have a strategy that can profit from whatever is happening in the markets.

That means we have to be ready for up, down and surprise markets.

But there are ways to get on the right side of trends… and make some money.

In a crazy world, where common sense has ceased to be common, that’s the best we can do.

Please send your feedback to coveluncensored@agorafinancial.com. Send me your thoughts on the upcoming election… and anything else.