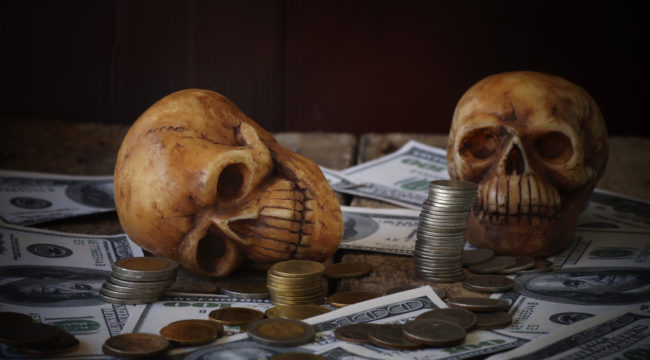 There is a concept, advanced by a philosopher named Karl Popper. Karl Popper decades ago called piecemeal engineering. What he meant by this is if you’re one of the power elites in the world — a political leader, finance minister or head of a globalist institution who wants to run the world or tell other people how to live their lives — you can’t do it all at once.

Many have tried. Caesar, Napoleon, Hitler, the great dictators in history have tried to do everything at once. But they were all defeated because they invite retaliation and pushback of various kinds.

Popper said that if you want to change the world, you must do it slowly, one piece at a time, in ways that people don’t notice. An analogy is something called the ratchet. A ratchet tool is a tool that only turns one way. You can turn it one way… but you can’t turn it back. It’s an irreversible process.

Now let’s take that concept of piecemeal engineering and apply it to the elimination of the U.S. dollar and the rise of the special drawing right (SDR), because that’s what we are looking at in the future.

The SDR was invented in 1969 and there were a number of issues of SDRs in the 1970s. During the ‘70s we had massive liquidity crisis, borderline hyperinflation, a quadrupling of oil prices, and a stock market crash. The dollar almost collapsed between 1977 and in 1981. The situation was so bad that in 1977, the United States Treasury borrowed money in Swiss francs. Nobody wanted U.S. dollars, at least not at an interest rate the U.S. was willing to pay.

But it moved the ratchet forward.

Then there was a 30-year period from roughly 1980 to 2010 which has been described as the age of King Dollar. They didn’t need SDRs because the banking system was doing its job.

But in 2009-2010 two things happened. First, in 2009 the IMF issued SDRs for the first time in almost 30 years. That was in response to the global liquidity crisis when it looked like the world’s central banks couldn’t act fast enough. So the IMF issued over $100 billion of SDRs. Few people are even aware it happened.

But it moved the ratchet forward once again.

At the time, I went on CNBC and said, “What they’re doing is testing the plumbing.” The SDR hadn’t been used since 1980. The IMF needed to make sure the system still functioned, like an air-conditioning or plumbing system that hasn’t been used in years.

And we won’t be seeing anymore 30-year gaps of the kind we had between 1980 and 2009. In January 2010, the IMF issued another paper really speculating on the rise of the SDR as world money or a global currency. It was really a blueprint for the permanent establishment of the SDR. In other words, not a special, temporary SDR issue in case of emergency — but making the SDR a permanent global reserve currency.

The reason the dollar is the world’s leading reserve currency is because there’s a very large liquid dollar-denominated bond market. Investors can go buy 30-day 10-year, 30-year Treasury notes, etc. The point is, there’s a deep, liquid dollar-denominated bond market to invest in that creates a lock-in effect. There is currently no equivalent bond market in SDRs. It will need to create one before SDRs can be considered a global reserve currency.

In the IMF’s vision, private companies and corporations can issue bonds denominated in SDRs. Who are the logical issuers of the bonds?

Probably multinational or multilateral organizations like the Asian Development Bank and maybe big corporations like IBM and General Electric.

Who would buy these SDR-denominated bonds? Mostly sovereign wealth funds. China will be substantial buyers. The point is, these issues are coming.

Now the deployment of the SDR is coming closer to fruition…

The SDR has been composed of four currencies — the U.S. dollar, British pound sterling, the euro and the Japanese yen. But that’s about to change…

At midnight on September 30, the IMF will include the Chinese yuan in its basket of currencies. That will be a major event in monetary history. The IMF is welcoming China to the club.

For many people in the West, Americans in particular, this is just some technical IMF procedure. But that’s not how the Chinese look at the world. The Chinese are all about saving face and gaining face. One way to gain face in the Chinese concept is by gaining prestige. Being included in the IMF’s exclusive club of currencies affords them that prestige, even though westerners tend to think of it as a mere technical readjustment.

Yesterday I said September 4, 2016 could well go down as the day the dollar died. Why did I pick that date instead of September 30, the official date when the yuan is included in the IMF’s basket of currencies?

Because September 4 is when the leaders of the world’s larger economies will gather in Hangzhou, China for the G20 annual summit. This will be China’s coming-out party. This is China saying, “We are an equal partner, maybe more than the equal partner of the United States of America and Europe. They will no longer dictate the world’s financial system.”

The symbolism and the visuals at the upcoming meeting will be spectacular.

And it’s important to realize that one G20 memo calls for “expanding the role of the IMF’s SDR (Special Drawing Rights).”

The pace is really picking up. The SDR bond issues I mentioned above are probably going to happen within the next couple of weeks. Between now and Labor Day we’ll see announcements about multibillion SDR bond issuance coming from the Asian Development Bank, some major Chinese commercial banks, the Asian Infrastructure Investment Bank, etc.

The point is, so these issues are coming. And over time, the SDR market will grow. It will not compete with the dollar-denominated bond market anytime soon, but the groundwork is being laid. Every time an institution invests in SDRs, they’ll be indirectly supporting the yuan. And it’ll help move the world that much further away from the dollar. This will have vast implications for anyone who holds their wealth in dollars.

The mechanics are too far along, the piecemeal social engineering was too well thought out, the ratchet is locked in place. It won’t be reversed. The next time there is a financial crisis, which I expect sooner than later, it’s not going to be the Fed that bails us out. It’s going to the IMF and the SDRs.

Then the ratchet effect will be completed.

In 10 years many people are going to look back and point at September 2016 as the point in time the dollar era ended. They can’t see it now.