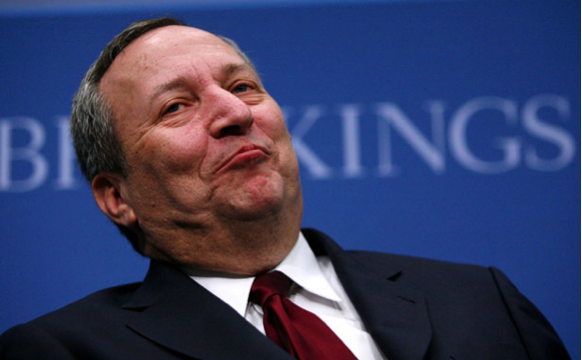 The Most Dangerous Man in America?

His name is Larry Summers. The chattering class – the so-called intelligentsia – tells us he’s a “genius”… one of the most brilliant economists in the world.

Just look at his resume…

In 1983, he became one of the youngest tenured professors in the history of Harvard at the age of 28.

He joined Bill Clinton’s administration before he turned 40, where he rose to the position of Treasury Secretary in 1999.

He then served as President of Harvard from 2001 to 2006. And in 2009, he joined the Obama administration to direct the President’s economic policy before leaving in 2010.

If you want to know why Summers’ return to power in Washington, D.C. should scare the hell out of every man, woman and child in America, consider the bone-chilling words he uttered last week…

Summers was speaking at a Bank of Japan conference in Tokyo when he floated the idea that the U.S. government should consider purchasing a “wider range of assets on a sustained and continuing basis.”

Translation: The feds should buy a ton of stocks to artificially boost the stock market and economy.

Well, the economy is struggling with stagnant growth and inflation. And according to Summers, the Fed is “fairly near the end of the rope” on more fixes.

Implicit in that argument is the admission that the Fed’s extraordinary “stimulus” measures of the past eight years to create “robust growth” and “boost inflation” have done squat.

So now that the Fed has failed and is seemingly out of bullets, what does “the smartest guy in the room” propose? You might think he would stop, pause and reflect on the obvious mistakes made since 2008.

No chance. Elite water boys like Larry Summers live to be memorialized in the history books, serenaded for their creativity. Their egos must dream up new Ponzi schemes. It justifies their existence.

But what of this new ego trip of having government hacks use taxpayer money to indiscriminately buy up common stocks to prop-up the stock market? Well, we now don’t have to joke about the government picking winners anymore—they just told you they will.

Did you just start humming the Beatles’ “Back in the U.S.S.R.” too?

But why stop there…

The domestic automotive sector is sagging a bit behind Japan and Germany? Just have the government buy up all the Fords and Chevys it can. Happy days are here again!

Why hasn’t anyone thought of this before?

Well, they have. But those who dared to say it out loud were carted off to a quiet place with padded walls and no sharp objects.

The End of Capitalism

In Summers’ deluded world, no longer do you need antiquated concepts like supply and demand or, for that matter, capitalism to determine market prices and economic growth.

Just hand over citizens’ money to “enlightened” men like Summers and they’ll decide what’s right for all of us… just like Mao, Stalin, Castro and Chavez cared for their people. Look how wonderful that turned out.

Bottom line, Summers is proposing pure socialism. Full stop. And he knows it. From a Bloomberg article on his Tokyo remarks:

“There are obviously important political and economic questions associated with government ownership of companies,” Summers noted. Some critics could term such a policy as “socialism,” he said…”

It’s not “critics” who term government ownership of public companies as socialism. The dictionary does that.

Look, don’t write off Summers’ comments as just the ramblings of an academic crackpot who’s been holed up in an ivory tower far too long.

He’s one of Hillary’s top economic advisors. He floated this yarn with full permission of Camp Clinton.

Summers is signaling to Wall Street that “they” will do whatever it takes to push the S&P higher and bring Hillary to power.

It’s sick, twisted and perverse. Summers knows this plan will create an even bigger bubble and an even bigger eventual bursting. And it goes against every last principle of what we once knew as capitalism.

In short, Larry Summers just launched a cruise missile at the very heart of the United States of America.

Please send your comments to me at coveluncensored@agorafinancial.com. Let me know what you thought of the debate.