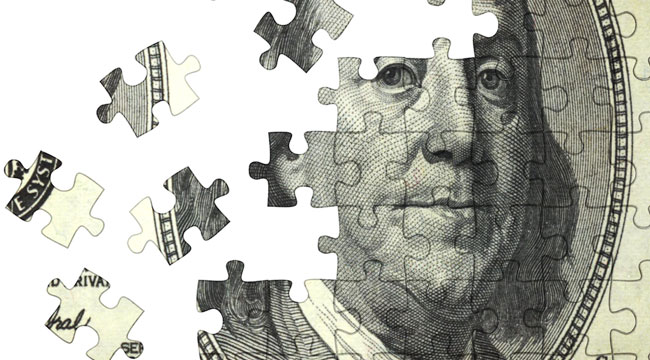 The economy has grown dependent on government spending and debt. Therefore, given the current structure of the economy, if the government spends significantly less, the country will remain marred in an economic depression with no visible end in sight.

It appears, then, that three options are available to the government. The first is austerity. The government could sharply reduce its spending. The result would be a New Great Depression. This is the least attractive option.

The second option is for the government to carry on doing what it does now — that is, the status quo, borrowing and spending to support consumption on. This approach would sustain the economy for at least a decade. Then there would be a U.S. sovereign debt crisis and the world would collapse into a New Great Depression. This option is preferable to option one, but far from ideal.

Option three is for the government to borrow and invest in a way that not only supports the economy but actually restructures it so as to restore its long-term viability. This option, rational investment, is the only one of the three with the potential to result in a happy ending. It differs from option two, the status quo, in a very significant way.

In option two, the government continues to borrow and spend in a way that boosts consumption in the economy. Spending in that way creates economic growth, but only once. When the money is spent, it is gone. It yields no long-term return.

In option three the government would borrow and invest; and the government’s investments would yield a return. In fact, given the magnitude of the resources the government has available to invest, the returns that could be generated would be sufficient to restore the government’s finances to health — perhaps even making it possible for the government to repay all of its debt within a relatively short period of time.

The government could continue spending money on the same things it does now, but on an ever-greater cales as it has for decades; and that would continue to generate economic growth up until the time when its sovereign debt crisis begins. There is literally no limit as to how much the government could spend through Medicare to improve the health of the nation’ and there seems to be no limit on the amount that can be spent on national defence.

Alternatively, the government could cap its spending on current programs and spend more, instead, on investment programs that could be made to quickly pay for themselves.

We built an economy out of $50 trillion of credit over the past 50 years. When credit expands, it creates both an asset and a liability. The sustainability of the entire economic superstructure depends on how that credit is used going forward.

If it is used for consumption, then it can generate no return and the superstructure will collapse. That is the mistake that led to this New Depression. if it is invested in projects that will generate a high enough return to pay the interest on the debt, then it will not only support the economic structure now in place, it  will support a larger and more prosperous economy.

Our society has failed to understand that our economic system has changed. Therefore, it has not yet grasped the possibilities inherent within this new system. Credit can now be deployed by the government on a scale so vast that it can revolutionize the production potential of this planet.

There is no doubt that the abandonment of commodity money (gold) created distortions that interfered with the self regulating market economy. The point to grasp, however, is that our global civilization has been built on and around those distortions and that it could very possible collapse into ruin if those distortions are not perpetuated through further credit expansion.

That requires the government to borrow and invest.

Thus, this economic crisis marks a crossroad for our civilization. Our options are to grasp and fearlessly exploit the immense possibilities inherent in our new credits based economic system or else fail to grasp them and collapse into what could prove to be decades of misery.

P.S. For my ongoing forecasts on U.S. debt… what the Fed will do and where I believe asset prices are headed, please subscribe to my quarterly video newsletter Macro Watch. I’ve created a coupon code for you as a Daily Reckoning reader — simply enter the coupon “daily” to receive a 50% discount. Click here to access it now.