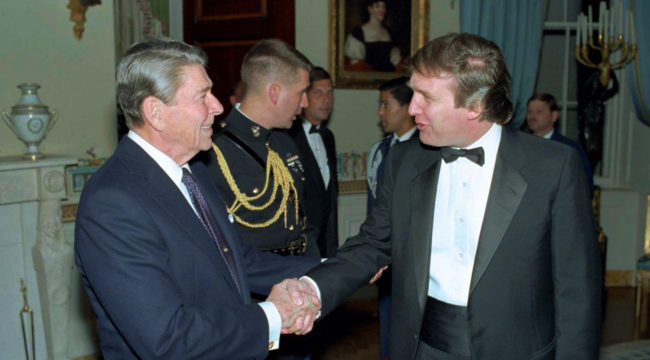 Could President Trump Use Reagan's Playbook?

Let’s apply the Ronald Reagan administration as a frame of reference to examine and compare president-elect Trump.  Doing so we can see what expectations might be for the economy going forward.

Ronald Reagan came in, in 1980, and he got a lot of the Trump treatment seen today. He was considered a buffoon, a dope. What did he know? He was a Hollywood guy, how could he be President? Many said that he was unstable.  That he was going to start pushing the nuclear button and start World War III. A lot of the things you’ve heard about Trump are exactly what they said about Reagan at the time.

He entered office with a team of advisors and did a lot of things right. He wasn’t alone. He had a lot of help from Paul Volcker, who was at the Fed at the time. It was Reagan and the Fed working together, in sync to turn the US economy around. As soon as Reagan came into office though, the US sunk in a really bad recession, one of the worst since World War II.

I’ve always thought it was part of the genius of Ronald Reagan that he got his recession over early. Most presidents do not make it through their terms in office without a recession. It may catch up to a President Trump, but you pull all the strings and try to avoid recession – or at least put it off as long as possible.

Reagan got his recession over at the beginning. He had a recession in 1981 going into 1982. Once that was done, the economy grew for seven straight years. It was one of the longest peacetime expansions in American history.

President Reagan had a great team. For over three years, from 1983 to 1986, growth in the United States was 16%. That was real growth. That’s not nominal growth. There is no inflation in that number, 16% over 5% a year. Now, keep in mind, since 2009 and Obama being sworn in, that for the last almost eight years, average annual growth in the United States has been barely 2%.

Taking this back to today, the Republicans will have the White House. They will also have the Senate and the House of Representatives.

Building from that understanding, it is important to highlight what’s different.

Pharmaceuticals are going up because Trump has signaled he wants to repeal and replace Obamacare while taking some of the fetters off the pharmaceutical and the medical industry.

Banking stocks are going up because the incoming administration has talked about repealing Dodd-Frank.

Construction stocks are going up at companies like Caterpillar and John Deere because they’re anticipating the need for a lot of construction equipment to build all these roads.

With all of that, why is the bond market going down and why is gold going down? It means trillions of dollars in spending and tax cuts.  It means a bigger deficit. It means that the deficit will be funded, likely, by issuing treasury bonds.

[Ed. Note: Jim Rickards expands on Federal Reserve policy, interest rates and the historic collapse that elites see coming.  To equip yourself with the knowledge and preparation for financial turmoil, he is sending any American a free copy of his latest New York Times bestseller, The Road to Ruin.  Click here to learn more.]

A lot of people would project inflation coming out of this. The reason for that is pretty simple. What causes inflation? Well, a lot of people think money printing causes inflation. That’s actually not true or, at least it’s not completely true. Money printing is only one half of what you need to get inflation. The Fed has printed $3.2 trillion of new money in the past seven years and other central banks in the world have printed even more.

The People’s Bank of China has printed even more than that. When you throw in the European Central Bank, the Bank of England, the Bank of Japan, and look around the world, you’re looking at $15 trillion of new money printing in the last seven years. Where is the inflation? Well, the answer is money printing alone doesn’t produce inflation if people don’t spend it, they don’t borrow it, they don’t invest it and they don’t put it to work. This is called the velocity of money or the turnover of money.

I’ve used the example. If I go out tonight and have dinner at a restaurant, and tip the waiter and the waiter takes my tip and takes a taxicab home and tips the taxi driver, and the taxi driver takes the tip and puts gas in her car, that money has velocity of three. My $1 produced a restaurant tip, a taxi tip, and a gallon of gas, a velocity of three. If I stay home and watch the television because I don’t feel like going out and leave my money in the bank, it has velocity of zero.

Well, $4 trillion times zero is zero, meaning if you don’t have velocity, you don’t have an economy. Your economy goes to zero. Velocity has been sinking like a stone, not for eight years, since the crisis, but for almost 20 years since 1998. That’s nearly 18 years that velocity has been going down. All this money printing has not produced inflation because we don’t have the turnover.

When you average it all out, there hasn’t be too much inflation even with all this money printing. John Maynard Keynes had a name for this, a name for what I just described where either “I go out, I’m a big spender” or “I stay home and keep my money.” He called it “animal spirits.”  Animal spirits is enthusiasm. It’s optimism versus pessimism. It’s a sentiment where we feel confident enough to borrow, buy, invest or use credit and spend money.

If we do, maybe someone else gets a job because the money we spend goes to some other business and that guy hires somebody and then that person feels better and they spend money. While this is a bit of an amorphous concept, it’s not something that can be put into equations. It should be understood as a branch of behavioral psychology, or animal spirits. We haven’t had them for eight years, and truly it has been longer than that.

Is Trump enough to get the animal spirits moving again? He might be. I think we have to think hard about that. That’s one of the biggest questions we’ve got. I don’t want to jump to that conclusion, but he might be. Ronald Reagan certainly did. I’ve been drawing this analogy between Trump and Reagan. Ronald Reagan absolutely got the animal spirits moving again.

Now to examine the important differences that exist between a president Reagan and president Trump.

Reagan had a major tailwind in the form of potentially lower interest rates. Trump is going to have a major headwind in terms of higher interest rates, the same thing with inflation. When Reagan came in, inflation was at 13%. By 1984, Volcker had got it down to around 4%. That was a massive disinflation.

In the 1980s, remember the US had a bull stock market and a bull bear market.  Stocks and bonds were both going up. Stocks were going up because of real growth and bonds were going up because interest rates were coming down and inflation was coming down. Trump could have the opposite. Trump could have a collapsing bond market and see stocks run out of steam.

The problem that is exists now is the debt-to-GDP ratio today is 100%. We’re back to where we levels seen at the end of World War II. Today, it’s about $20 trillion. What is Trump going to do? Trump wants to be a big spender.

He does not have the fiscal space. The US is getting uncomfortably close to where Italy, Spain, and Greece, and Japan and some of these other potentially bankrupt countries are.

We now have two outcomes here, recession or inflation. Neither one of them are good.

It may have different origins, but the instability of the system and the potential for the collapse has not changed one bit because this is the snowflake avalanche. The snow on the mountainside is still there.

Maybe with Trump, it’s not snowing as hard, but the unstable mountainside is still there and it still only takes one snowflake.