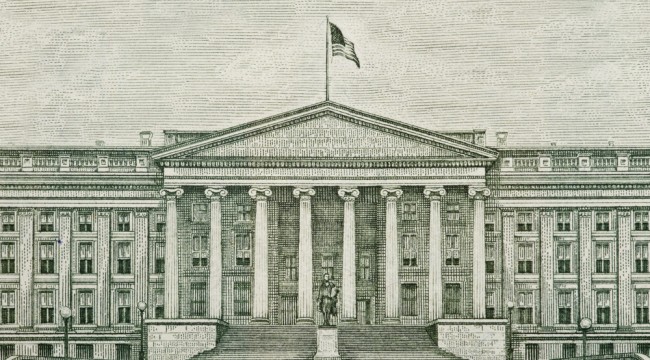 Congress to Fed: Push That String!

Remember the national debt debate? You don’t hear about it much these days. The deficit is now shrinking! Democrats and Republicans alike are falling over each other to take credit.

Only a fool would believe Congress has fixed anything. There has been some unrelated decline in health care costs. Mostly, it’s just the Fed printing up new money to play with.

The debt is projected to rise to $20 trillion by the end of the decade, thanks to health care costs and skyrocketing interest costs. Congress, pundits and think-tank academics are hoping the economy will grow enough to keep up. But they may be running out of time. Interest rates on the benchmark 10-year Treasury climbed from 1.66% in May to 2.2% on Tuesday.

“That 54-basis point increase looks small to the casual eye,” The Fiscal Times reports. “But if it continues, the higher yield could increase by billions of dollars how much money the federal government spends to service the $16.7 trillion national debt.”

The interest rate increase is already 10 basis points above the Congressional Budget Office (CBO) estimate for this year and 15 points above the forecast of the American Bankers Association (ABA). The CBO estimated $233 billion in interest payments this year… the figure is currently being revised upward by several billion.

Congress has been counting on lower borrowing costs to keep the debt serviceable, programs funded and voters relatively happy. They’re likely put the screws to Bernanke to keep the printing press humming. To what end, you ask? Congress wants to, as economists call it, “push on a string.” They want to keep interest rates low and push speculation in stocks higher. Savings and investment be damned…

P.S. Don’t miss this Daily Reckoning exclusive on the deficit by former Treasury secretary Paul O’Neill. Click here to read it. You can also sign up to receive The Daily Reckoning by email by clicking here.