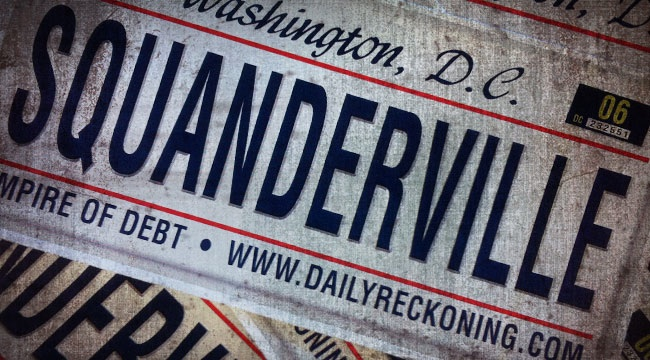 I wrote an article for Fortune on the parable of Squanderville and Thriftville, which was designed to simplify for people the problems inherent in persistent and large trade imbalances. Economics tends to put people to sleep, and I thought that by creating a couple of islands populated by inhabitants with quite widely different activities that it might get across a point that otherwise they get lost on.

The thrust of it is that if you own a lot of property — in this case, an island — you can trade it for the things that you consume every day. And you can do that for a long time, but eventually, you run out of property, and then you have to work a whole lot harder to provide for your own needs, but also to pay back the debts you’ve incurred or to get back the property you want. Short-term actions have long-term consequences that sometimes people don’t think about in the short run.

In the last few decades, but accentuating in the last six or eight years, this country has started consuming considerably more than it produces. In other words, it’s relied on the labor of others to provide things that we use day by day.

We’re able to do that because we have lots of things to trade for those goods, so we can trade away little pieces of the country. And because we’re so rich, we can do it for a long time and we can do it on a large scale, but we can’t do it forever.

It’s like a credit card. My credit’s pretty good at the moment; if I quit working and have no income coming in, but keep spending, I can first sell off my assets, and then, after that, I can start borrowing on my credit card. And if I’ve got a good reputation, I can do that for quite a while. But at some point, I max out. At that point, I have to start producing a whole lot more than I consume in order to clean up my debts.

We have a terrific economy, and the real standard of living in the 20th century, per capita, improved seven to one. There’s never been anything like that in history. And we will have a better economy 20 years from now, and 50 years from now, than we have now. We are continuously getting more productive in the country. We have more people turning out more things. Our country has a fine future economically. You don’t want to bet against the United States.

On the other hand, we are creating debts and selling off assets, which will require American citizens in the future to service those debts, and that will take some part of their output. But I want to emphasize that the output left for them will still be higher per capita than it is today. We are not spending or consuming ourselves into destitution. Americans will be living better 20 years from now and 40 years from now than they do today.

We are using up some of our national credit card and selling off a small portion of our assets every year in order to consume more than we produce. But the value of the country goes up annually and over the decades, so we can do some of that. We can still improve the standard of living per capita — not as much as if we weren’t consuming so much, but we will still be improving the standard of living. The time will come, however, if we continue this policy, when Americans will find that 2% or 3% of their labor every day is going to service the debts incurred by the overconsumption of the present people. They’ll still live very well — I want to emphasize that.

We’re transferring small bits of the country — ownership of the country, or IOUs — to the rest of the world, but our national pie is still growing. In other words, we’re like a very, very, very rich family that owns a farm the size of Texas, and we have all this output coming from the farm. Now, because we consume a little more than we produce, we’re selling off tiny bits of that farm daily, a couple billion dollars’ worth, or we’re giving a small mortgage on it, which we don’t even notice, but it does build up over time.

On the other hand, the farm is getting more productive all the time. So even though we own a little less of the farm, or we create these IOUs against it, our equity in the farm actually increases somewhat. That’s why people will benefit over time. But they won’t benefit as much as if they hadn’t given the IOUs or sold off little pieces of the farm.

Both personally and at Berkshire Hathaway, we have far more assets in dollars than in all other currencies combined. So it is not like anything drastic is going to happen in the United States. On the other hand, if you give more and more of your IOUs to the rest of the world and you denominate them in your own currency, history shows that countries that do that have an interest over time in inflating and in having their currencies worth less.

If I could finance all of my own consumption today by handing out something called Warren Bucks, or Warren IOUs, and I had the power to determine the value of those IOUs over time, believe me, I would make sure that when I repaid them 10 or 20 years from now that they were worth less per unit than they are today. So any country that piles up external debt will have a great temptation to inflate over time, and that means that our currency, relative to other major currencies, is likely to depreciate over time.

The net federal debt is about 40% of GDP. Compared with what it’s been historically in this country and what it is in many other countries, it’s not at an unreasonable level. And debt can only be measured in relation to income. You have 300 million Americans with great income potential. The government has a claim on that income in the future. It has whatever claim it wants, as a practical matter. Forty percent of GDP in that debt is not something that’s caused us trouble in the past. I don’t think it’s something that will cause us trouble in the future.

I think keeping debt within a range of GDP makes sense. I don’t think you want debt to climb to 100% of GDP. I don’t think you want to pay off the national debt. And that means if GDP grows in nominal terms, 4-5% a year, and the national debt grows at 4-5% a year, you really haven’t changed the fundamental economic dynamics of the country any more than if Berkshire is worth $10 billion and owes $1 billion, and someday later, it’s worth $100 billion and owes $10 billion. Nothing has really changed for the worse in terms of Berkshire’s credit, and the same goes for the government.

The demographics have worked somewhat against the standard of living for a long time. Retired people live in retirement much longer now than they did 50 years ago. But the standard of living kept improving during the 20th century, even as demographics moved away from ideal, if you’re talking about productivity. You had more and more people retired relative to the ones producing, and that’s continuing. But productivity improves all the time, too, so it’s a good thing when people don’t have to work as hard to take care of the needs of the whole population. That’s what’s been happening over the years, and I think it’ll continue to happen.

Warren Buffett
for The Daily Reckoning

Warren Edward Buffett is an American business magnate, investor, and philanthropist. He is widely considered the most successful investor of the 20th century. Buffett is the primary shareholder, chairman and CEO of Berkshire Hathaway and consistently ranked among the world’s wealthiest people. He was ranked as the world’s wealthiest person in 2008 and as the third wealthiest person in 2011. In 2012, Time Magazine named Buffett one of the most influential people in the world.