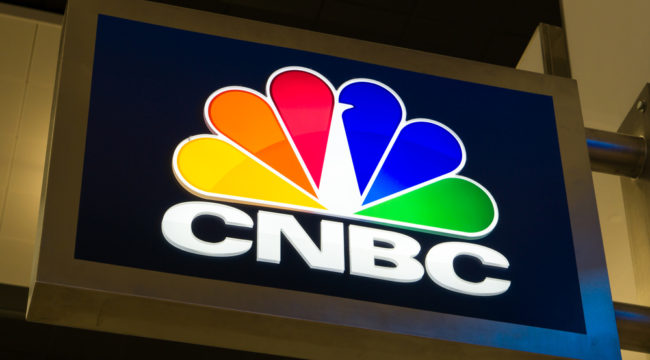 We don’t want to say our Jim Rickards knew something was going down, but… note the time and date on this: 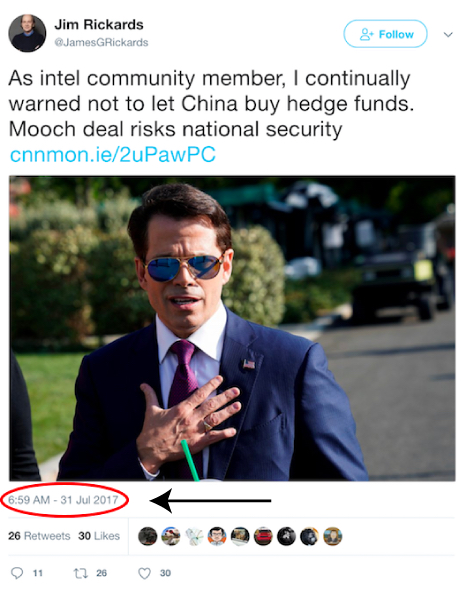 Less than eight hours later, Anthony Scaramucci’s brief tenure as White House communications director was over. By at least one account, he was escorted from White House grounds. (No word whether he was seen carrying a cardboard box.)

The mainstream says “Mooch” was done in by his foul-mouthed rant against other top White House aides, and/or a desire by the new White House chief of staff, retired Gen. John Kelly, to have a “clean slate.”

But Jim believes another factor proved decisive — Scaramucci selling his hedge fund to a Chinese conglomerate.

The sale is pending approval by an obscure but important federal body called the Committee on Foreign Investment in the United States. CFIUS’ main function is to evaluate foreign purchases of U.S. companies for national security risks. Jim has previously worked with intelligence officials who are part of CFIUS.

“My recommendation would have been for CFIUS to turn the deal down… we had always warned ‘don’t let our adversaries such as China or Russia get plugged into the U.S. financial system’… When I was involved, this deal would have not gone through,” Jim told CNBC yesterday.

Curiously, Jim was interviewed by CNBC’s Asian channel. Evidently the network judged this story too subtle and nuanced for dumb American audiences.

Anyway, Mooch is now history. With Jim’s help, we’ll turn our attention to the future today.

As long as we have China on the brain… “The long-expected trade war with China has begun at last,” says Jim.

It turns out CFIUS has already objected to at least nine foreign acquisitions of U.S. companies this year, according to an analysis by Reuters. The newswire calls it “a historically high number that bodes poorly for China’s overseas buying spree.”

As you might recall, Jim says Donald Trump put his campaign promises of a trade war with China on hold last spring, in hopes Beijing would somehow lean on North Korea to curb its nuclear weapons and missile programs. A 100-day clock started during Trump’s meeting at Mar-a-Lago with Chinese president Xi Jinping last April.

The clock ran out on July 15. North Korea continues to conduct missile tests, although the much-hyped test of a missile hypothetically capable of hitting the U.S. mainland last week appears to be another bust; the missile broke up on re-entry.

Over the weekend Trump tweeted about how “China could easily solve this problem!” In response, China’s ambassador to the United Nations says, “They [the United States and North Korea] hold the primary responsibility to keep things moving, to start moving in the right direction, not China.”

The denied deals by CFIUS are only the start of this new trade war, says Jim. “Soon Trump will announce steel and aluminum tariffs. After that, more action will be taken to punish Chinese banks that help North Korea finance its weapons programs.

“By November, the U.S. will label China a currency manipulator, which will start another review process, leading to still further sanctions. China will not take any of this lying down but will retaliate with its own sanctions, tariffs and bans on U.S. investment in China.

“This trade and currency war will shake markets and be a major head wind for world growth.”

To say nothing of a prelude to a U.S. attack on North Korea. Jim still believes that’s in the cards for early next year.

But the grim future doesn’t end there…

“These new sanctions pose an existential threat to Russia,” says Jim of legislation Congress passed last week that the president is set to sign.

A veto is pointless because an override is certain: The sanctions bill passed with only two dissenting votes in the Senate and three in the House. The narrative about Russia “hacking the election” has overwhelming bipartisan appeal, the lack of evidence notwithstanding.

Absent from much of the mainstream coverage is exactly what these sanctions entail. It’s worth exploring.

“This new law,” Jim explains, “provides that U.S. companies may not participate in Russian efforts to explore for oil and gas in the Arctic. Even foreign companies that do business with Russia in Arctic exploration will be banned from U.S. markets and U.S. contracts.”

Uhh — this is a problem. “Russia depends heavily on oil and gas revenue to propel its economy,” says Jim. “Russia tries to control new discoveries in order to maintain its quasi-monopoly position as the premier energy provider to Europe. Russia needs Western technology to meet the challenges of Arctic exploration. In effect, this law handicaps Russia’s efforts financially and technologically and weakens its grip on global energy markets.”

For bonus points, the bill could also touch off a trade war between America and Europe.

Germany needs gas to stay warm in the winter — and to wean its power grid off the nuclear plants it plans to shut down by 2022.

If gas won’t come from Russia, it would have to come in the form of liquefied natural gas shipped on tankers (at great cost) from the United States. Sucks for the Germans, but great for American LNG providers like Cheniere Energy (LNG) — which spent nearly $4 million on lobbying last year, according to the Center for Responsive Politics.

“We consider this as being against international law, plain and simple,” adds Germany’s economy minister Brigitte Zypries. “Of course we don’t want a trade war. But it is important the European Commission now looks into countermeasures.”

But for our purposes today, it’s the Russian countermeasures that are most worrisome.

The Russian business daily Kommersant reports that Moscow intends to ban all American tech companies and all American farm products from the Russian market. Oh, and no more exports of Russian titanium for Boeing; by some estimates up to 30% of the titanium Boeing needs for its airplanes comes from Russia.

But what if it doesn’t end there? “Russian retaliation will not consist of reciprocal sanctions on the U.S.,” says Jim Rickards. “Russia has said it will strike ‘asymmetrically.’

“This means Russia will use the means it is best at, including cyberattacks. If you wake up one day soon and the power grid is down and banks and stock exchanges are closed, you can thank President Putin and the U.S. Congress for starting a financial and cyberwar that neither side could control.”