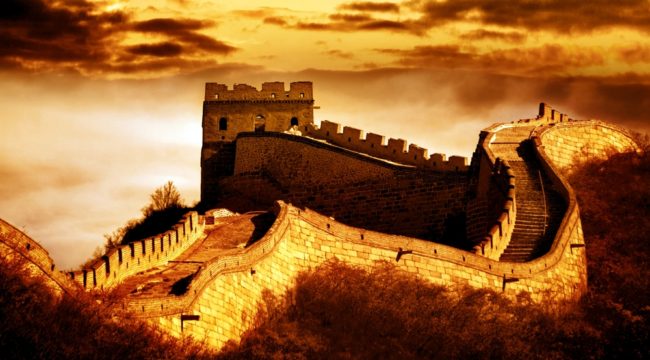 Is China About to Shock the Market?

Did the U.S. just double-cross China under the Shanghai Accord? If so, China will act on its own to devalue the Chinese yuan. In that case, the Dow Jones Industrial Average could plunge to 16,450, and the S&P 500 could plunge to 1,925 in a matter of weeks, wiping out trillions of dollars of investor wealth.

This is not guesswork. Plunges of over 10% in U.S. stock indices happened twice in the past year. Both times it was because of a combination of a stronger dollar and weaker yuan. It’s happening again. And you need to understand the dynamics both to avoid losses and reap big gains by positioning ahead of the meltdown. 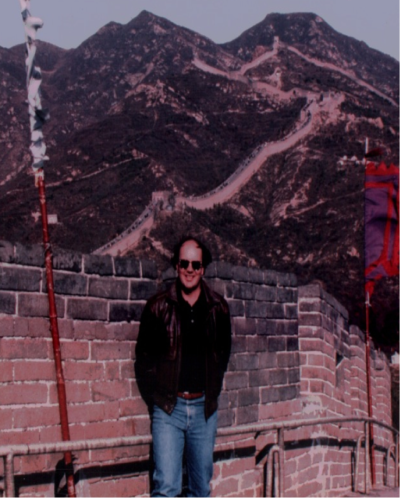 At The Great Wall of China in 1991. This visit was not long after the Tiananmen Square Massacre of June 4, 1989. Few Americans visited China at the time. Trade and investment relations were strained because of U.S. sanctions related to the massacre. I have visited China many times in the twenty-five years since my first visit and developed a network of contacts among government officials, private investors and academics to inform my investment analysis. Readers of Currency Wars Alert are familiar with the background of these currency gyrations and the Shanghai Accord. Here’s a quick synopsis:

From early March to mid-May 2016, the Shanghai Accord worked like a charm. The yuan was stable against the dollar, and the dollar got weaker against the yen and euro. U.S. stocks staged a major rally from around 16,000 to almost 18,000 on the Dow Jones Industrial Index. It seemed that all was right with the world.

Unfortunately, the Fed could not leave well enough alone. Instead of celebrating this truce in the currency wars, the Fed reneged on its weak dollar promise in May, and began talking about interest rate hikes possibly in June or July. The hawkish tone was expressed by several regional reserve bank presidents, notably James Bullard, Loretta Mester, and Esther George. The dollar rallied almost 4% in a few weeks. That’s a huge move in currencies where changes are usually registered as small fractions of 1%.

The shock devaluation and the stealth devaluation both took place while the dollar was getting stronger in anticipation of U.S. rate hikes. Under the Shanghai Accord, the dollar got weaker, as agreed, and the yuan was relatively stable against the dollar. Finally, the Fed reneged and starting talking about rate hikes. The result was the dollar strengthened and the cheater devaluation began.

What do all of the currency wars moves have to do with U.S. stocks? The answer is the USD/CNY cross-rate may be a more powerful determinant of stock prices than traditional barometers such as earnings, stock multiples or economic growth. This relationship is starkly illustrated in the chart below.

Both times China began to devalue and both times U.S. stock markets sank like a stone.

As the chart shows, that process of a new crash had already started in early June, but the crash was “saved by Brexit.” The Brexit vote caused an immediate collapse in sterling and the euro and led to a “risk off” flight to quality in dollars, gold and U.S. stocks. Now that the Brexit bounce is over and stocks are at nosebleed levels, the question is will history repeat itself, or will this time be different? 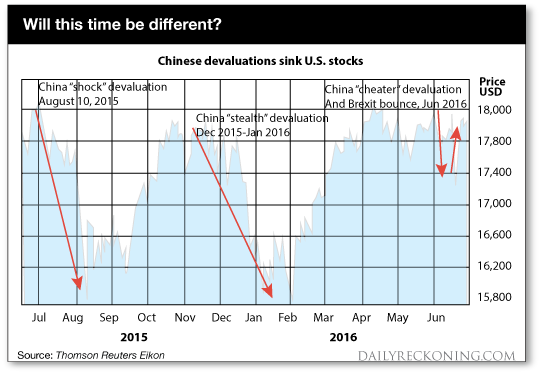 At Currency Wars Alert, we use our proprietary IMPACT method to spot the next moves in major currency pairs. IMPACT is a method I learned in my work for the U.S. intelligence community including the CIA, and the Director of National Intelligence. It’s based on what the intelligence community calls “indications and warnings.” Even in the absence of perfect information, you can tell where you’re going by unique signposts along the way. What are the indications and warnings we see on CNY/USD?

Currency pairs don’t move in a vacuum. They move in response to interest rate policy including forward guidance about policy. To a great extent, interest rates and exchange rates are reciprocals. If interest rates are higher, or expected to go higher, the currency will strengthen as capital flows in to take advantage of higher yields.

If interest rates are lower, or expected to go lower, the currency will weaken as capital flows out in search of higher yields elsewhere. The knowledge that currency rates reflect trade deficits and surpluses is mostly obsolete. Capital flows dominate trade flows in the determination of exchange rates.

When China devalued the yuan in August 2015, capital outflows surged. Once the yuan stabilized against the dollar in early 2016, the capital outflows were greatly reduced. Capital outflows from China will be one of the main indications and warnings we’ll be watching in the months ahead to judge the impact of this latest Chinese devaluation.

In the short-run, U.S. stocks are headed for a fall based on renewed tough talk by some Fed officials. The Fed is concerned that U.S. stocks are in bubble territory. They suggest that the easier financial conditions caused by higher stock prices make this a good time to raise interest rates. The rate hike talk then makes the dollar stronger and prompts China to weaken the yuan. The weak yuan triggers capital flight, which causes a spillover liquidity crunch, which in turn leads to a correction in U.S. stocks.

Once the correction takes place, the Fed can rescue the stock market again with more dovish signals. This will weaken the dollar, stabilize the yuan, and reinstate the Shanghai Accord. Until then, the risks are that the Fed has not learned from its past mistakes and will ignore its responsibilities under the Shanghai Accord. August 2016 could be a replay of August 2015.