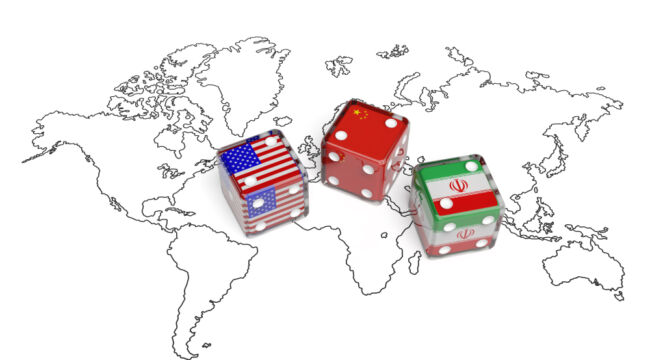 China, Iran Are on the March

There is so much focus on the COVID-19 pandemic right now that Americans can’t be blamed if they’re not spending much time studying other developments.

That’s understandable, but inattention may be as dangerous as the virus itself. That’s because America’s adversaries are taking advantage of the situation by challenging U.S. interests in a set of geopolitical hot spots.

They believe we’re too distracted by the virus containment effort to mount a firm response.

At the same time, geopolitical confrontation is a classic way to rally a population against an outside threat, especially when they’re still hurting from the pandemic and the economic consequences. It’s one of the oldest tricks in the books to get the people behind the government.

This appears to be the case with China and Iran right now.

China in particular is trying to divert attention away from its own cover-up of the pandemic, which allowed it to spin out of control. So it’s engaging in a global propaganda campaign to try to blame the U.S. for the spread of the virus.

This could put actual fatalities in China and Iran about equal to the U.S. (over 70,000 dead).

Meanwhile, the U.S. has been reeling economically, and there’s no reason to believe that China and Iran are feeling any less pain. Let’s first consider China…

Not surprisingly, China has tried to take advantage of the situation by acting aggressively in the South China Sea and threatening Taiwan.

The South China Sea is a large arm of the Pacific Ocean surrounded by China, Vietnam, the Philippines, Malaysia, Brunei and Indonesia.

All six countries have claims to exclusive economic zones that extend several hundred miles from their coastlines.

Parts of the sea are international waters governed by the Law of the Sea Convention and other treaties. All of the other nations around the South China Sea have rejected China’s claims. But they’ve been pushed back to fairly narrow boundaries close to their coastlines.

China has ignored all of those claims and treaties and insists that it is in control of the entire body of water including islands, reefs and underwater natural resources such as oil, natural gas, undersea minerals and fisheries.

China has also become even more aggressive by designating the South China Sea reefs as city-level administrative units to be administered by mainland China.

And China has pumped sand onto reefs to build artificial islands that have then been fortified with airstrips, harbors, troops and missiles.

China has said it will never seek hegemony, but that’s clearly not true. It most certainly seeks hegemony in the region.

And it’s willing to enforce it. Several encounters have happened lately where Chinese coast guard vessels have rammed and sunk fishing boats from Vietnam and the Philippines.

The U.S. operates “freedom of navigation” cruises with U.S. Navy ships to demonstrate that the U.S. also rejects China’s claims. It’s not difficult to envision an incident that could rapidly escalate into something serious.

The two aircraft carriers the Navy has in the western Pacific, the Theodore Roosevelt and Ronald Reagan, were both taken out of action due to outbreaks of the coronavirus among their crews. That’s been a dramatic reduction in power projection in the region.

But neither side will back down, as neither wants to appear weak. This makes warfare a highly realistic scenario. It’s probably just a matter of time.

Meanwhile, Iran has harassed U.S. naval vessels in the Persian Gulf, launched new missiles and continued its support of terrorism in Iraq, Yemen and Lebanon.

These actions are more signs of weakness than strength, but they are dangerous nonetheless.

In the past 10 years, we’ve been through currency wars, trade wars and now pandemic.

Are shooting wars next? Pay attention to China, Iran and, yes, North Korea. They haven’t gone away either.

The world is a dangerous place — and the virus has only made it more dangerous.