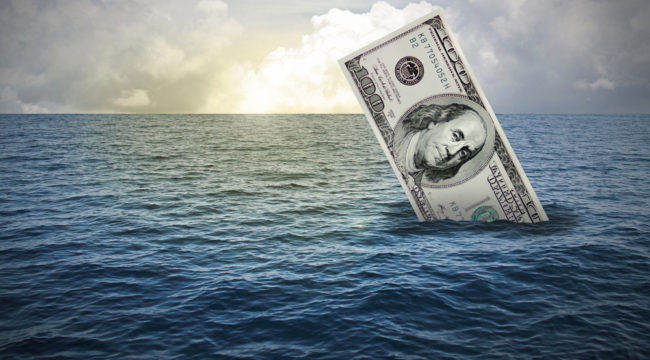 China’s Next Step to Destroy the Dollar

China is currently modifying the terms of its oil trade with Saudi Arabia. Specifically, China is working on a deal to pay for Saudi oil using Chinese yuan. This effort poses a direct threat to the security of the dollar.

If this China-Saudi deal happens — yuan for oil — it’s another step closer to the grave for the petrodollar, which has dominated global finance since 1974. You can revisit Jim Rickards article about the Assault on the Dollar, here.

To recap, the petrodollar is weakening because the dollar is losing power as the world’s reserve currency. This is similar to the way pounds sterling gradually fell out of favor during the decline of the British Empire. The decline may take a long time, but what we’re seeing today is another step in the death march of the dollar.

I’ll tell you how to protect your wealth in dollars after I explain this shift.

Since 1974, Saudi has accepted payment for almost all of its oil exports — to all countries — in dollars. This is due to an agreement between Saudi and the U.S., dating back to the days of President Nixon.

Beginning about 15 years ago, China ceased being self-sufficient in oil, and began buying Saudi oil. As per all Saudi customers, China had to pay in dollars. Even today, China still pays for Saudi oil in U.S. dollars and not yuan, which perturbs China’s leaders.

Since 2010, China’s total oil imports have nearly doubled. According to Bloomberg News, China has surpassed the U.S. as the world’s largest oil importing nation. Here’s a chart, showing the trend. 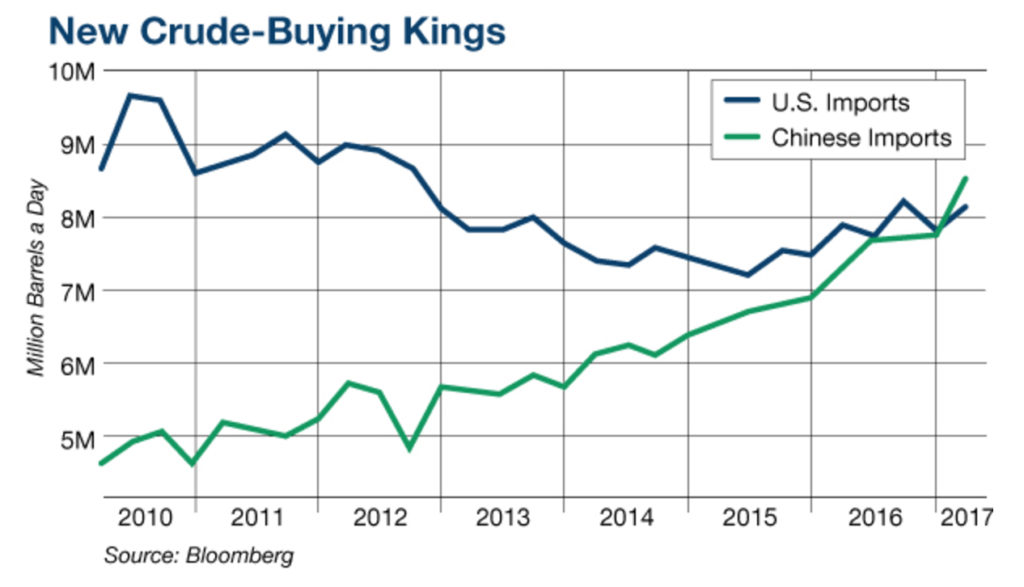 As China imports more and more oil, the idea of paying for that oil in yuan instead of dollars becomes more critical. China does not want to use dollars to buy oil. So, China is beginning to squeeze Saudi over the form of currency in which their oil trade is conducted. China is doing this by steadily lowering its oil purchases from Saudi.

Presently, China’s three top oil suppliers are Russia, Saudi and the West African nation of Angola. Backing-up these three key suppliers are a combination of sources in Iran, Iraq and Oman, which help to diversify China’s oil-supply chain.

In the past few years, China has shifted oil purchases away from Saudi, and Russia’s oil exports have risen from 5% to 15% of the Chinese total.

Saudi’s share of Chinese imports has dropped from over 25% in 2008, to under 15% now. Meanwhile, Saudi competitors Russia, Iran, Iraq and Oman are selling more oil to China.

Saudi would like to reverse this declining trend of oil-trade with China. However, these kind of major oil flows don’t just happen in a vacuum.

There’s a good reason why Russian oil sales to China are increasing. As you’ll see in Nomi’s article, trade and financial services are often closely linked. Over the past few years, China has deepened its trading roots with Russia — now, China pays for Russian oil in yuan. Russia, in turn, uses yuan to buy goods from China.

Beyond trade in goods, within the past six months Russia has set up a branch of the Bank of Russia in Beijing. From there, Russia can use its Chinese yuan to buy gold on the Shanghai Exchange. In a sense, Chinese-Russian oil trade is now backed-up by a “gold standard.”

Looking ahead, Saudi Arabia will find itself more and more locked-out of the Chinese oil market if it won’t sell oil for yuan. But to do this, the Saudis must move away from U.S. dollars— and from petrodollars — if Saudi wants to maintain and increase access to China’s oil market.

We’ll know more about the likelihood of this after Donald Trump’s tour of the Middle East.

If Saudi begins accepting yuan for oil, all bets are off on the petrodollar. Yuan-for-oil will entirely change the monetary dynamics of global energy flows. I expect the U.S. dollar to weaken severely when that news breaks.

Much of this oil-for-yuan news is public information. Yet, for some strange reason, there’s a form of blindness within western policymaking and media circles concerning the implications of yuan-for-oil. The idea is so “off-the-wall” that many policy leaders simply ignore it.

Ignore away. But we could wake up one morning in the midst of a massive currency crisis, in which dollar values are falling and oil prices in dollars are soaring.

Jim and I strongly recommend a 10% allocation of your investable portfolio to precious metal.