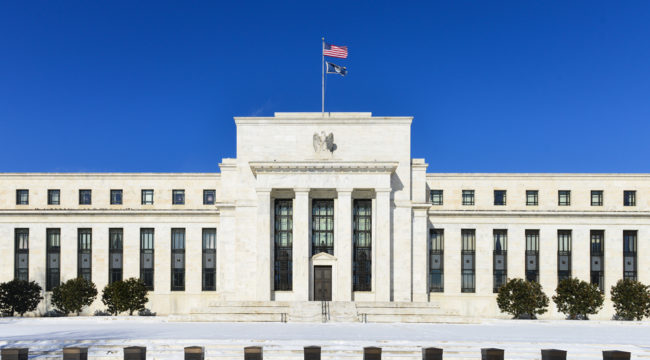 I started in the Treasury bond business in 1985 after a 10-year career in commercial banking. I retired as a senior officer of Citibank that year at a relatively young age and made the move to Wall Street.

My firm was Greenwich Capital Markets, one of a select group of “primary dealers” allowed to transact directly with the Federal Reserve. Monetary policy is conducted through open-market operations run by a trading desk at the Federal Reserve Bank of New York.

Being a primary dealer just means you have passed rigorous screening by the New York Fed in terms of credit, capital, operations, management and other criteria.

Importantly, as a primary dealer you have to make a continuous two-way market in all maturities of U.S. Treasury and government-backed mortgage securities across the yield curve. You are expected to buy when others are selling and to sell when others want to buy.

That market-maker role is how the Fed insures liquidity in the Treasury market and is the price a firm must pay for the privilege of being named a primary dealer.

Greenwich Capital was small but mighty. We did not have the capital size of other primary dealers like Goldman Sachs or Morgan Stanley, but we did have a reputation as having some of the smartest sales and trading staff around. We punched above our weight as a market maker.

As the firm grew, we were frequently ranked in the top five and sometimes No. 1 in certain parts of the yield curve, particularly 10-year Treasury notes. Our customers were the biggest firms in the world such as PIMCO, MetLife and giant foreign banks based in Japan and Germany.

As a member of the executive committee at Greenwich, part of my job was staying in the good graces of the Fed and making sure nothing jeopardized our primary-dealer status. If the Fed had ever pulled our name off the primary-dealer list, our customers would have abandoned us the next day.

I became a regular in meetings at the Federal Reserve Bank of New York. That experience served me well years later, in 1998, when I had to negotiate the bailout of Long Term Capital Management sponsored by the New York Fed.

There was something else highly memorable about my time at Greenwich Capital. It was a money machine! The firm typically had returns on equity of 20–40%.

That was partly because we were smart, savvy and hardworking. But there was another reason. Our firm had caught the wave of the greatest bond bull market in history. It was hard not to make money.

This 30-year chart below shows the declining path of interest rates on the 10-year Treasury note from 1988–2018.

This bull market in bonds actually began in 1981 after Paul Volcker pushed short-term interest rates over 20%, the highest since the Civil War, to kill the runaway inflation of the late 1970s and early 1980s.

Although there were rallies and drawdowns along the way, and plenty of chances to lose money — such as the bond bloodbath of 1994 — the overall trend is clear. Bond yields have fallen and bond prices have rallied for over 30 years: 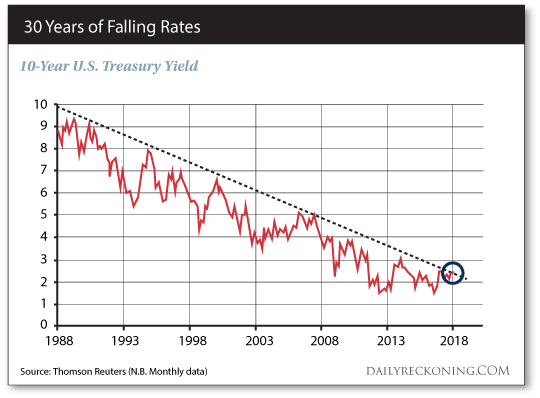 To understand why this bond bull market was such a source of profits for Wall Street, including my old firm, a bit of simple bond math is in order.

The first point is that bond prices move inversely to yields. If interest rates are going down, bond prices are going up and vice versa. A declining interest rate environment is heaven-sent for a bond dealer with inventory or an investor with bonds in her portfolio. That’s what the chart shows.

The second point is that the amount of capital gain on a bond in a declining rate environment increases as the absolute level of rates declines.

You don’t need to understand any of those technicalities to understand that in a declining rate environment, you not only have capital gains, but those gains expand as rates fall to lower levels.

The U.S. has never had negative nominal rates (Japan, the eurozone and Switzerland have), but it has had negative real rates. In the early 1980s, nominal interest rates on long-term Treasury securities hit 13%. But inflation at the time was 15%, so the real rate was negative 2%. The real cost of money was cheap even as nominal rates hit all-time highs.

If you’re an economist or analyst trying to forecast markets based on the impact of rates on the economy, then you need to focus on real rates.

The situation today is much closer to the latter example.

The yield to maturity on 10-year Treasury notes is currently around 2.7%, the highest since the yield briefly touched 3% at the end of 2013. Inflation as measured by the PCE core deflator (the Fed’s preferred measure) is currently about 1.5% year over year. Using those metrics, real interest rates are about 1.2%, relatively high by historic standards.

The key question for analysts is whether these high real rates are justified by growth expectations and expectations of higher inflation, or whether they will act as a drag on growth in a weak economy that cannot bear such high rates.

A lot depends on the answer to that question.

Right now that ratio of stock returns to bond returns is near a quarter-century high. The last two times this ratio showed similarly elevated levels were just before the dot-com crash in 2000 and just before the stock market meltdown in 2008.

There are essentially two ways for this extreme ratio to normalize.

The first form of normalization would be if stock values decline sharply and bonds rally on lower rates (producing larger capital gains) and a flight to quality. This is what happened after 2000 and 2008.

The second form of normalization would be if bond returns soar on much higher interest rates. Those rate increases would have to be extreme to offset capital losses from the same rate increases. Stocks would crash in the face of those much higher rates. This is what happened in 1980–82, which at the time was the worst U.S. recession since the Great Depression.

The stakes could not be higher. In either scenario we are looking at a potential stock market correction (at best) or crash (at worst).

The Fed is tightening monetary policy not because the economy is robust but because they are desperate to normalize interest rates and their own balance sheet to prepare for the next recession.

It takes 3–4% in interest rate cuts to pull the U.S. economy out of a recession. Right now the Fed policy rate is 1.5%. The Fed needs to get that rate to at least 3.25% to be able to cut rates sufficiently in the next recession. The Fed won’t get there until late 2019 or early 2020 at their current tempo of rate hikes.

If the Fed has to stimulate the economy before rates get to 3.25%, they will run out of room to cut rates before the job is done. That will force the Fed to print money again in a new quantitative easing program, “QE4.”

That’s why the Fed needs to trim its balance sheet — so they can blow it up again.

In short, the Fed is raising rates and reducing the money supply at the wrong time for the wrong reason. The Fed is preparing for the next recession but will probably cause a recession by trying.

Meanwhile, the Treasury market is stuck in its own feedback loop. Rates rise on expectations of growth and inflation, but those rate increases slow growth and cause disinflation, which brings rates back down again. Wash, rinse and repeat.

We’ve seen this cycle eight times since Bernanke’s “taper talk” in May 2013. Another Fed flip-flop is coming later this year.

Rates were higher in late 2013 than they are today in expectation of growth and inflation. What happened?

The conundrum will be resolved soon. Higher rates will slow the economy and put the Fed on pause.

The total return ratio between stocks and bonds will normalize, with stocks losing ground and bonds as the big winner.

I can’t give you an exact date when it happens, but it’s best to be prepared in advance.