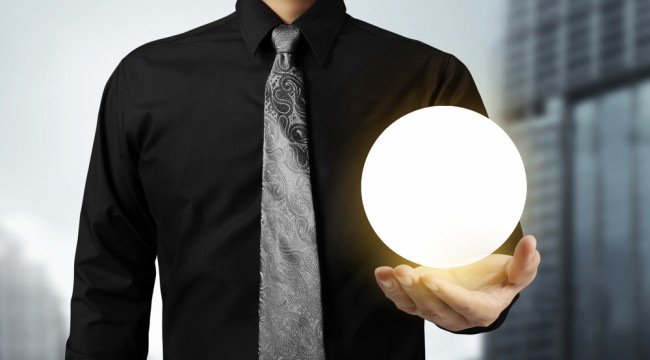 Bold Predictions from the Bubble Crowd

Judging by the headlines in mainstream financial media when we woke up, we were supposed to get an enormous rally after fabulous numbers last night from Apple and Facebook.

The tech-heavy Nasdaq popped more than 1% on the open. But as we write, it’s barely in the green. The Dow and the S&P are likewise flat.

“Today’s action is a huge tell,” reads an email from Greg Guenthner of our trading desk.

“Nasdaq futures were up 50 points before the bell. Gold was down big.

“Thirty minutes later, momentum stocks were selling off hard (again). Facebook was red. Gold soared close to $1,300. There’s a hint of panic under the surface.

“Get out the meat grinder. The psychological damage inflicted by falling momentum and tech names has clearly spooked investors. I think we head lower into the summer.”

The more interesting story everyone’s ignoring is this: The bear cases for Apple and Facebook collapsed with last night’s releases.

Apple’s best days are supposed to be behind it: Steve Jobs is no longer around. Shorter term, Apple’s iPhone push into China is supposed to fall flat on its face: There aren’t enough Chinese with enough disposable income to buy iPhones when they can buy cheaper domestic or Korean models.

Whoops: Apple has now reversed a two-year slowdown in iPhone sales. “Here’s why China is moving the needle now for Apple,” explains Agora Financial investment director Paul Mampilly: “This is the first quarter where they were selling the iPhone in cahoots with China’s biggest mobile phone service — China Mobile (CHL). You see, the Chinese market works a bit like the U.S. market, where people buy their phones and wireless service at the same time.”

No, there’s no breakthrough product on the horizon that’ll get people to line up around the block. “But in the meantime,” says Paul, “the company is doing stuff that makes its investors happy.”

The stock split announced yesterday means “if you own one share of Apple today, you’ll have seven sitting in your account when the split is complete. But remember that a stock split does not change the value of the Apple shares you own. You can think about it like splitting a single pizza. You can split a pizza into five, seven or 10 slices, but it’s still one pizza.”

Doesn’t hurt that Apple is raising its dividend 8% and buying back another $30 billion in stock — which it can afford with $151 billion cash in the bank.

“Apple is still a very cheap stock paying a 2.5% dividend,” says Paul. “It’s still growing about 20% a year based on Wall Street analysts’ estimates, and you buy all that for a price-earnings ratio of 11. Not too shabby.”

And Facebook? “Facebook does what television used to do,” Paul explained in yesterday’s Daily Reckoning — it delivers eyeballs to advertisers.

The knock on Facebook went like this: As Internet use transitions from computers to mobile devices, people will have less tolerance for ads hogging the smaller amount of real estate on a smartphone screen. And they definitely won’t put up with video ads that count against their monthly data limits.

Whoops again: “Facebook,” says Paul, “reported that 59% of its revenue comes from a mobile-based 1.23 billion users. This is up from nearly zero at the time of its IPO in May 2012.

“Overall, Facebook grew its sales by 72% in the first quarter. And if you annualize its sales from this quarter, it’s going to have $10 billion in sales for 2014. Facebook made $642 million for the quarter, or 193% more than last year.

“Facebook is a very fast-growing, highly profitable company. I wouldn’t call it a cheap stock. But my experience is that when stocks are growing as fast as Facebook is growing right now, you’ll never get a chance to buy it really cheap. That was true for Microsoft and Cisco and Oracle in the 1990s. And I believe the same thing is happening with Facebook.”

One more reality check about the “new tech bubble.”

If you’ve seen buzz about it lately, that’s because hedge fund guru David Einhorn — the guy who made a fortune shorting Lehman Bros. in 2008 — recently declared, “We are witnessing our second tech bubble in 15 years.”

One of the factors he cited was that investors and analysts are tossing aside traditional valuation methods — the same way they did when they said earnings didn’t matter in 1999.

Money manager and uber-blogger Barry Ritholtz begs to differ, and he passes along this chart of the Nasdaq 100’s price-earnings ratio. “It speaks for itself,” he says… 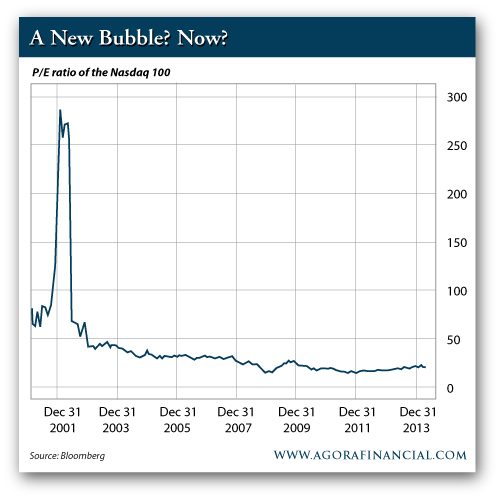 “David Einhorn is a very astute trader and an insightful fund manager,” Mr. Ritholtz avers. “He is a smart guy, and I only rarely find myself in disagreement with him. But when it comes to the declaration of an echo tech bubble, I am on the other side of the argument.”

Ed. Note: Whether you believe we’re in the midst of another tech bubble, or that it’s just a solid bull market in tech stocks, you’ll want to make sure you’re prepared for whatever the market decides to throw at you next. Sign up for the 5 Min. Forecast, right here, and learn how you can gain exclusive access to the best investment advice the market has to offer.