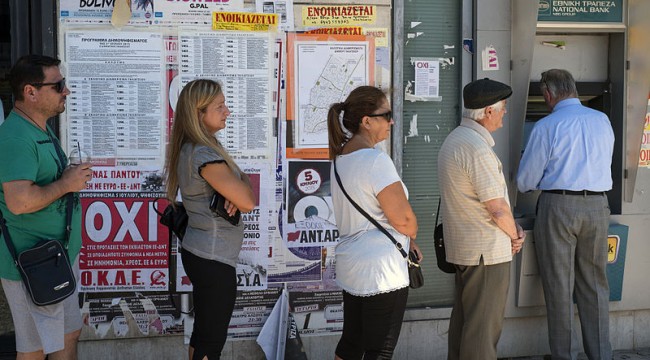 All Eyes On Greece

The economies of the developed world are healing and their central banks are pursuing accommodative monetary policies. However, over the past few months, the developed stock markets have traded in a sideways range and this lack of progress is primarily due to the uncertainty surrounding Greece’s debt negotiations.

At the time of writing, all eyes are on Greece’s referendum which will determine whether the nation accepts its creditors’ austerity measures.

Although nothing is set in stone, recent polls indicate that the majority of Greek’s do not wish to go back to the Drachma; therefore, they will reluctantly agree to the tough austerity deal.

In the meantime, Greece’s leaders are trying to persuade the nation that a ‘no’ vote would still keep them within the Eurozone; but it appears as though the Greeks are not buying into this view.

Look. The Greek saga has been going on for 4-5 years now and it is clear to us that without a debt haircut, there is no way the nation can repay its obligations.

Unfortunately, Greece’s creditors are in no position to pardon the debt (Figure 1), because it will set a precedent for other heavily indebted European nations such as Italy, Portugal and Spain. Consequently, we have a deadlock whereby neither side is willing to move and now, it is up to the Greeks to decide their own fate. 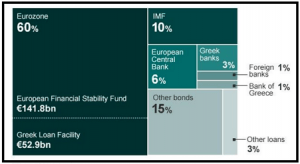 Although there is a huge amount of uncertainty involved in all of this, below is a pretty rough outline of how the referendum may play out.

A “Yes” Vote Will Ease Tensions

Under this scenario, the referendum will ease tensions and put the European creditors back in the dominant position. Furthermore, this outcome will be extremely awkward for Mr. Tsipras’ government and it may even force new leadership. A new government will be bullish for the financial markets as it will probably agree to the creditors’ terms.

Unfortunately, a new deal without a debt haircut will only kick the can further down the road and none of this will solve Greece’s economic problems.

A “No” Vote Will Create Even More Uncertainty

Under this scenario, the referendum will empower Greece’s government and put the creditors in a weakened negotiating position. This will probably increase geo-political tensions and make things worse.

Furthermore, the market may view a “no” vote as a Grexit vote, because if the Greeks back Mr. Tsipras, the European Central Bank (ECB) will probably stop supporting Greece’s banking system in the near term.

This increases the odds that Greece will default on its payment to the ECB on 20th July; thereby rendering the nation’s banking system insolvent. Out of desperation, if Mr. Tsipras’ government reacts, breaches the treaty and brings back the Drachma, then all bets are off.

In terms of the financial markets, either scenario outlined above should not cause Lehman Part 2. After all, the Greek economy is miniscule (just 2% of Eurozone GDP) and the majority of the nation’s debt is held by other governments.

Furthermore, by now, the ECB must have prepared for the worst case scenario and if needed, funding, swap lines etc. will be available.

It goes without saying that the financial markets will much prefer a “yes” outcome at this time because this result will foster a deal and bring investors’ attention back to Europe’s improving economic fundamentals.

If you review Figure 2, you will note that over the past few months, Eurozone’s money supply (M1) growth has risen sharply. Furthermore, as you can see, there is a strong correlation between Eurozone money supply growth and the EuroStoxx 50 Index; so the recent surge in M1 bodes well for the region’s stock market. 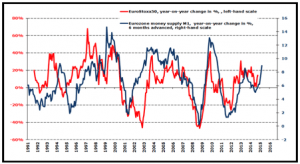 To reiterate, a “yes” vote will probably re-ignite the risk trade and push up stock prices. Conversely, a “no” vote will bring about additional near-term turbulence in the financial markets.

In any event, even if the voters reject their creditors’ latest proposal, it is not a given that Greece will be forced to leave the Eurozone. It is notable that over the past few days, several Eurozone policymakers have stated that regardless of the referendum’s outcome, they may still be ready to start work on a new deal!

Even though the ongoing debacle is too complex, it is our contention that the European policymakers will not want Greece to abandon the single currency or leave the Eurozone. So, it may well be that we all look back in a month from now and wonder what the fuss was all about!

Now that we have covered Greece, it is time to discuss the world’s largest economy and its highly influential central bank. As far as business activity in the US is concerned, things are muddling along and inflationary expectations remain well contained.

Given this benign scenario, it is likely that the Federal Reserve will not raise the Fed Funds Rate anytime soon.

Make no mistake, over the past 50 years, every single economic recession and prolonged bear market on Wall Street was caused by an overly ‘tight’ Federal Reserve. So, it is highly unlikely that the next recession/bear market will occur for as long as the Federal Reserve remains accommodative.

If you review Figure 3, you will observe that each and every economic recession (yellow areas on the chart) during the past five decades was preceded by the inversion of the yield curve.

Furthermore, the inversion of the US yield curve also either preceded or coincided with the onset of each and every prolonged bear market over the same period! 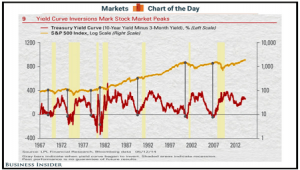 Given this strong correlation and historical evidence, it is reasonable to assume that the next economic recession/bear market in stocks will not occur for as long as the yield curve remains steep.

Today, the yield curve is quite steep and long-term interest rates in the US are significantly higher than short term rates. So, if history is any guide, the Federal Reserve will need to raise short term rates quite aggressively to break the camel’s back.

Although anything can happen, given that both the Bank of Japan and the European Central Bank are engaged in QE and the developed world is facing deflationary pressures, we do not foresee aggressive monetary tightening by the Federal Reserve.

If our assessment is correct, over the following months, the world’s largest economy will continue to expand at a sluggish pace and this should prolong the ongoing primary uptrend on Wall Street.

Looking at the technical picture, there can be no doubt that since December, the American stock market has been in a sideways trading range.

However, given the recent upside breakouts by the NASDAQ Composite and Russell 2000 Growth Index (Figure 4), it is probable that the ongoing trading range on Wall Street is just a routine consolidation within the ongoing primary uptrend. 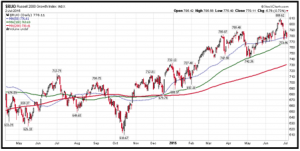 Even though we are still in a primary uptrend, this market is extremely deceptive and only half of the stocks traded on the NYSE are participating in the ongoing festivities. Furthermore, amidst the ongoing volatility, there is intense sector rotation.

On the bearish side of the ledger, airlines, casinos, energy, commodities, precious metals and railways are looking weak and we do not have any exposure to these securities.

Turning to Asia, the stock market of the world’s second largest economy has done an abrupt U-Turn and over the past 2½ weeks, it has declined by an astonishing 30%! It is notable that the uptrend came to a screeching halt soon after the Chinese authorities unexpectedly imposed restrictions on margin financing in mid-June.

Since then, despite Beijing’s desperate attempts to stabilise the stock market (surprise rate cut, reduction in the minimum reserve requirement etc.), the Shanghai Composite has continued to sink on record volume!

From a technical standpoint, the Shanghai Composite has now fallen through the psychologically important 4,000 level and it has also violated its multi-month trend line support (Figure 5). Clearly, the market has lost its nerve and many leveraged investors are rushing towards the exit.

In terms of leverage, even though the market has fallen by a mind-numbing 30% in less than 3 weeks, the outstanding margin has only declined moderately from the peak of Rmb2.3 trillion on 18th June to Rmb2.1 trillion by 2nd July. Thus, deleveraging in the market is likely far from over and the 10% limit-down rule is delaying a market clearance.

Clearly, the path of least resistance is now down and given the magnitude of the sell-off, it is conceivable that we have already seen this cycle’s top.

For our part, since our trailing stops were hit, we have booked our profits and closed out our positions in China.

At this stage, nobody knows when the market will bottom out but if Beijing fails to turn around sentiment quickly, then similar to what HKMA did in 1998, the Chinese government may also have no choice but to become the buyer of last resort.

Elsewhere in Asia, due to the ongoing QE program, the Japanese stock market is performing well and the Tokyo Nikkei Average has now climbed to a 15-year high! In our fund portfolios, we are maintaining our modest currency-hedged exposure to Japanese equities.

Bearing in mind the above, we remain overweight equities in the developed world and believe that until the commencement of the next bear-market, Europe, Japan and the US will continue to outperform the developing nations.

Furthermore, we suspect that (similar to the previous stock market cycles) the next economic contraction will also be preceded by the inversion of the US yield curve.

Therefore, we are keeping a close watch on interest rates and at the appropriate time, will take evasive action and reposition our managed portfolios. Until then, the path of least resistance remains up and the stock markets of the developed world should continue to reward investors.

For our part, we have invested our Discretionary Equity Portfolio and Discretionary Fund Portfolio in the strongest areas of the market and are pleased that since inception, both these strategies have outperformed the MSCI AC World Index by a wide margin. Our performance data can be viewed from www.purusaxena.com

Puru Saxena
for The Daily Reckoning

Puru Saxena is the founder of Puru Saxena Wealth Management, his Hong Kong based firm which manages investment portfolios for individuals and corporate clients. He is a highly showcased investment manager and a regular guest on CNN, BBC World, CNBC, Bloomberg, NDTV and various radio programs. He also publishes a widely read economic report, Money Matters, which is available from www.purusaxena.com