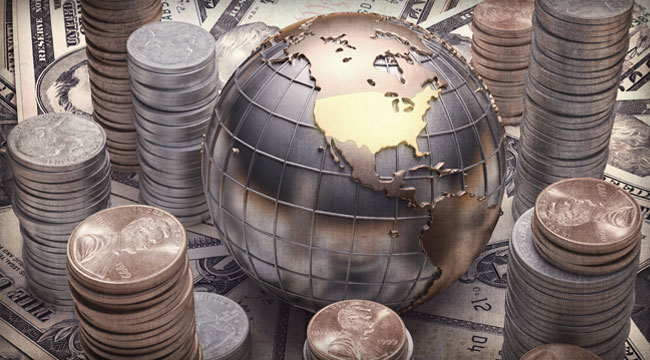 A New Bank that Challenges the US Dollar's Reserve Status

In early July 1944, delegates from 44 countries gathered at the Mount Washington Hotel in Bretton Woods, New Hampshire. A three-week summit took place, at which a new system was agreed to regulate the international monetary and financial order after the Second World War.

The U.S. was already the world’s commercial powerhouse, having eclipsed the British Empire several decades earlier. America was also on course to be among the victors of “Europe’s conflict,” even though its economy was largely unscathed by war. As such, Bretton Woods was U.S.-dominated and produced a settlement largely on U.S. terms.

Seventy years ago this week, that fateful summit ended. Its close marked the moment the dollar’s unquestionable supremacy was secured. Since then, global commerce has been conducted largely in dollars and leading economies have held the greenback as their primary reserve currency.

The same system remains intact today, with the lion’s share of commercial settlements worldwide still clearing the U.S. banking system — even if the parties involved have nothing to do with the States.

The dollar’s hegemony continues to be cemented, meanwhile, by the operations of the International Monetary Fund and World Bank. Founded at Bretton Woods, they’re both Washington based, of course, and controlled by America, despite some Francophone window-dressing.

The advantages this system bestows on the U.S. are enormous. “Reserve currency status” generates huge demand for dollars from governments and companies around the world, as they’re needed for reserves and trade. This has allowed successive American administrations to spend far more, year-in year-out, than is raised in tax and export revenue.

By the early Seventies, U.S. economic dominance was so assured that even after President Nixon reneged on the dollar’s previously unshakeable convertibility into gold, amounting to a massive default, dollar demand kept growing.

So America doesn’t worry about balance of payments crises, as it can pay for imports in dollars the Federal Reserve can just print. And Washington keeps spending willy-nilly, as the world buys ever more Treasuries on the strength of regulatory imperative and the vast liquidity and size of the market for U.S. sovereign debt.

It is this “exorbitant privilege” — as French statesman Valéry Giscard d’Estaing once sourly observed — that has been the bedrock of America’s post-war hegemony. It is the status of the dollar, above all, that’s allowed Washington to get its way, putting the financial squeeze on recalcitrant countries via the IMF while funding foreign wars. To understand politics and power it pays to follow the money. And for the past 70 years, the dollar has ruled the roost.

This won’t change anytime soon. Something just took place, though, which illustrates that dollar reserve currency status won’t last forever and could be seriously diluted. Last week, seven decades on from Bretton Woods, the governments of Brazil, Russia, India and China led a conference in the Brazilian city of Fortaleza to mark the establishment of a new development bank that, whatever diplomatic niceties are put on it, is intent on competing with the IMF and World Bank.

It’s long been obvious the BRICs are coming. The total annual output of these four economies has spiraled in recent years, to an astonishing $29.6 trillion (£17.3 trillion) last year on a PPP-basis adjusted for living costs. That’s within spitting distance of the $34.2 trillion generated by the U.S. and European Union combined.

America’s GDP, incidentally, was $16.8 trillion on World Bank numbers, and China’s was $16.2 trillion — within a whisker of knocking the U.S. off its perch. The balance of global economic power is on a knife-edge. Tomorrow is almost today. 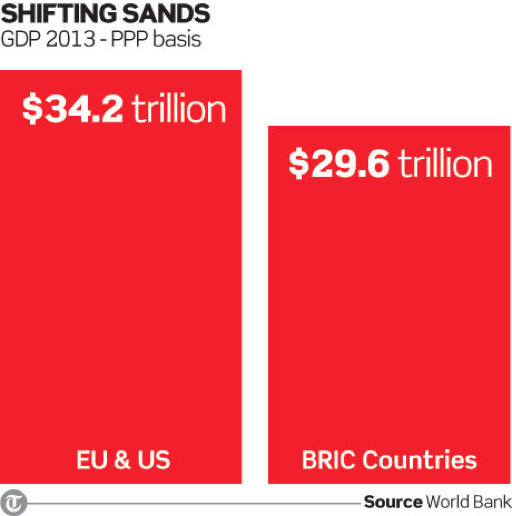 Consider also that the BRICs collectively hold sway over 50% of global currency reserves, rising to almost three-quarters if you take the emerging markets as a whole. The G7 nations between them control only 20% — and less than 8% if you exclude Japan.

Based on such balance sheets, we’re now seeing institutional change. The new BRICs Development Bank, modelled on the IMF, will have a $100bn currency reserve available to lend around the world, giving distressed debtor nations an alternative to the “Washington consensus.”

For a long time, the BRICs have been paying in to the IMF, yet been denied additional influence over what happens to the money. Belgium has more votes than Brazil, Canada more than China.

The institutions governing the global economy have failed to keep pace with reality. Modest reforms giving the large emerging markets more power, agreed with much fanfare in 2007 and again in 2010, have been stalled by Washington lawmakers. The BRICs have now called time, setting up their own, rival institution based in Shanghai.

Although the dollar’s reserve status won’t end overnight, the global payments system is now moving inexorably towards that outcome.

The key to the dollar’s future is petrocurrency status — whether it’s used for trading oil and other leading commodities. Here, too, change is afoot. China’s voracious energy appetite and America’s increased focus on domestic production mean the days of dollar-priced energy look numbered.

Beijing has struck numerous agreements with Brazil and India that bypass the dollar. China and Russia have also set up rouble-yuan swaps pushing America’s currency out of the picture. But if Beijing and Moscow — the world’s largest energy importer and producer respectively — drop dollar energy pricing, America’s reserve currency status could unravel.

That would undermine the U.S. Treasury market and seriously complicate Washington’s ability to finance its vast and still fast-growing $17.5 trillion of dollar-denominated debt.

In May, Beijing and Moscow signed a huge multi-decade gas supply contract, to sit alongside a similar oil deal agreed in 2009. No one knows what share of this energy trade will be on a yuan-rouble basis — and the two governments aren’t saying. This question, seemingly inane, is among the most important diplomatic issues of our time.

At the moment, although Russia’s export partners do sometimes settle in roubles, most Sino-Russian trade is still in dollars. But the combination of this new gas deal, and western sanctions on Russia — has seen Moscow and Beijing step up bilateral efforts to facilitate large-scale non-dollar settlement.

With western anti-Russia sanctions likely to be tightened again after the tragic shooting of a Malaysian passenger plane over Ukrainian airspace, Beijing’s response will be closely scrutinized. I, for one, expect the Chinese to say little until it’s clearly established who grounded the plane and why.

Although the dollar’s reserve status won’t end overnight, the global payments system is now moving inexorably towards that outcome. The U.S. currency accounted for just 33% of all foreign exchange holdings in 2013, on IMF numbers, down from 55% in 2001.

Within a decade or so, a “reserve currency basket” may emerge, with central banks storing wealth in a mix of dollars, yuan, rupee, reals and roubles, as well as precious metals. Perhaps some kind of synthetic bundle of the world’s leading currencies will be developed, with emphasis placed, after years of western money-printing, on assets backed by commodities and other tangibles.

I also believe central banks may include cybercurrencies (such as bitcoin) in their reserves. If you think that’s mad, consider that mankind has long sought scarcity — be it with shells, stones or metallic elements — to store wealth. Now the money-printing taboo has been broken by yet another generation, it makes sense to use complex computer algorithms to ensure that only a certain amount of a particular currency unit can ever exist.

The dollar’s status is a big question. Judging the outcome is more akin to stargazing than scientific economics. But the establishment of this BRIC Development bank, timed to coincide with the anniversary of Bretton Woods, is an audacious and significant move. The world’s emerging giants now have thumbscrews on the West.

Liam Halligan
for The Daily Reckoning

Ed. Note: If the U.S. loses its world reserve currency status, what will you do? If you don’t immediately know the answer to that question, we suggest you sign up for the FREE Laissez Faire Today email edition. In every single issue, readers are given several opportunities to discover real, actionable investment advice that will aid them in any kind of market, no matter what happens to the US dollar’s reserve status. Click here now to sign up for FREE, and you could discover a slew of ways to protect and grow your wealth as you never thought possible.

Liam Halligan is a British economist, journalist and broadcaster. Since 2003, Halligan has written his weekly “Economics Agenda” column in The Sunday Telegraph — which has been recognized with a British Press Award.