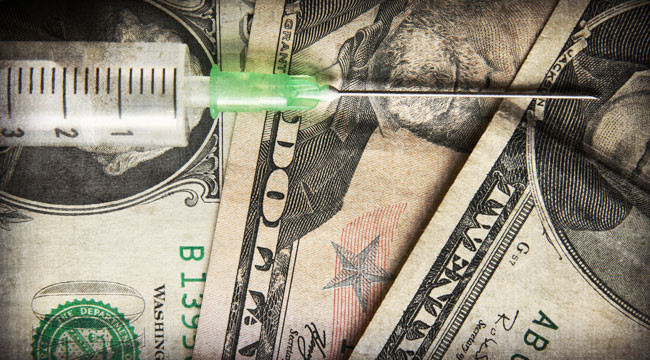 A Cure for the Paper Money Disease

Before 1933, the people themselves had an effective way to demand economy. Before 1933, whenever the people became disturbed over federal spending, they could go to the banks, redeem their paper currency in gold and wait for common sense to return to Washington.

That happened on various occasions, and conditions sometimes became strained, but nothing occurred like the ultimate consequences of paper money inflation. Today, Congress is constantly besieged by minority groups seeking benefits from the public treasury. Often, these groups control enough votes in many congressional districts to change the outcome of elections.

And so congressmen find it difficult to persuade themselves not to give in to pressure groups. With no bad immediate consequence, it becomes expedient to accede to a spending demand. The Treasury is seemingly inexhaustible. Besides, the unorganized taxpayers back home may not notice this particular expenditure — and so it goes.

The gold standard acted as a silent watchdog to prevent unlimited public spending.

This 14.5 million figure does not include about 2 million receiving either unemployment benefits or soil conservation checks. However, it includes about 2 million GI’s getting schooling or on-the-job training. Excluding them, the total is about 12.5 million, or 500% more than in 1932. If each beneficiary accounted for four votes (and only half exhibited this payroll allegiance response), this group would account for 25 million votes, almost by itself enough votes to win any national election.

Besides these direct payroll voters, there are a large number of state, county and local employees whose compensation in part comes from federal subsidies and grants-in-aid. Then there are many other kinds of pressure groups. There are businesses that are being enriched by national defense spending and foreign handouts.

These firms, because of the money they can spend on propaganda, may be the most dangerous of all. If the Marshall Plan meant $100 million worth of profitable business for your firm, wouldn’t you invest a few thousand or so to successfully propagandize for the Marshall Plan? And if you were a foreign government getting billions, perhaps you could persuade your prospective suppliers here to lend a hand in putting that deal through Congress.

Faraway from Congress is the real forgotten man, the taxpayer who foots the bill. He is in a different spot from the tax-eater or the business that makes millions from spending schemes. He cannot afford to spend his time trying to oppose federal expenditures. He has to earn his own living and carry the burden of taxes as well.

But for most beneficiaries, a federal paycheck soon becomes vital in his life. He usually will spend his full energies if necessary to hang onto this income. The taxpayer is completely outmatched in such an unequal contest. Always heretofore, he possessed an equalizer. If government finances weren’t run according to his idea of soundness, he had an individual right to protect himself by obtaining gold.

With a restoration of the gold standard, Congress would have to again resist handouts. That would work this way. If Congress seemed receptive to reckless spending schemes, depositors’ demands over the country for gold would soon become serious. That alarm in turn would quickly be reflected in the halls of Congress. The legislators would learn from the banks back home and from the Treasury officials that confidence in the Treasury was endangered.

Congress would be forced to confront spending demands with firmness. The gold standard acted as a silent watchdog to prevent unlimited public spending. I have only briefly outlined the inability of Congress to resist spending pressures during periods of prosperity. What Congress would do when a depression comes is a question I leave to your imagination.

I have not time to portray the end of the road of all paper money experiments. It is worse than just the high prices that you have heard about. Monetary chaos was followed in Germany by a Hitler; in Russia by all-out Bolshevism; and in other nations by more or less tyranny. It can take a nation to communism without external influences.

Suppose the frugal savings of the humble people of America continue to deteriorate in the next 10 years as they have in the past 10 years? Someday, the people will almost certainly flock to “a man on horseback” who says he will stop inflation by price-fixing, wage-fixing and rationing. When currency loses its exchange value, the processes of production and distribution are demoralized.

For example, we still have rent-fixing and rental housing remains a desperate situation. For a long time, shrewd people have been quietly hoarding tangibles in one way or another. Eventually, this individual movement into tangibles will become a general stampede unless corrective action comes soon.

…paper money experiments… can take a nation to communism without external influences.

Most opponents of free coinage of gold admit that that restoration is essential, but claim the time is not propitious. Some argue that there would be a scramble for gold and our enormous gold reserves would soon be exhausted.

Actually, this argument simply points up the case. If there is so little confidence in our currency that restoration of gold coin would cause our gold stocks to disappear, then we must act promptly. The danger was recently highlighted by Mr. Allan Sproul, president of the Federal Reserve Bank of New York, who said:

“Without our support, under present conditions, almost any sale of government bonds, undertaken for whatever purpose, laudable or otherwise, would be likely to find an almost bottomless market on the first day support was withdrawn.”

Our finances will never be brought into order until Congress is compelled to do so. Making our money redeemable in gold will create this compulsion. The paper money disease has been a pleasant habit thus far and will not be dropped voluntarily any more than a dope user will without a struggle give up narcotics. But in each case, the end of the road is not a desirable prospect.

I can find no evidence to support a hope that our fiat paper money venture will fare better ultimately than such experiments in other lands. Because of our economic strength, the paper money disease here may take many years to run its course. But we can be approaching the critical stage.

When that day arrives, our political rulers will probably find that foreign war and ruthless regimentation is the cunning alternative to domestic strife. That was the way out for the paper-money economy of Hitler and others. In these remarks, I have only touched the high points of this problem. I hope that I have given you enough information to challenge you to make a serious study of it.

I warn you that politicians of both parties will oppose the restoration of gold, although they may outwardly seemingly favor it. Also, those elements here and abroad who are getting rich from the continued American inflation will oppose a return to sound money. You must be prepared to meet their opposition intelligently and vigorously. They have had 15 years of unbroken victory.

But unless you are willing to surrender your children and your country to galloping inflation, war and slavery, then this cause demands your support. For if human liberty is to survive in America, we must win the battle to restore honest money.

There is no more important challenge facing us than this issue — the restoration of your freedom to secure gold in exchange for the fruits of your labors.

Ed. Note: This essay was prominently featured in The Daily Reckoning email edition, which offers readers regular commentary on everything from gold to the markets at large… and gives them specific opportunities to profit from them. Signing up is completely free, and only takes about 30 seconds. Find out what all the hype is about. Sign up for The Daily Reckoning email edition, for free, right here.

Howard Homan Buffett was an Omaha, Nebraska businessman, investor, and four-term Republican United States Representative. He was the father of Warren Buffett, the billionaire investor.