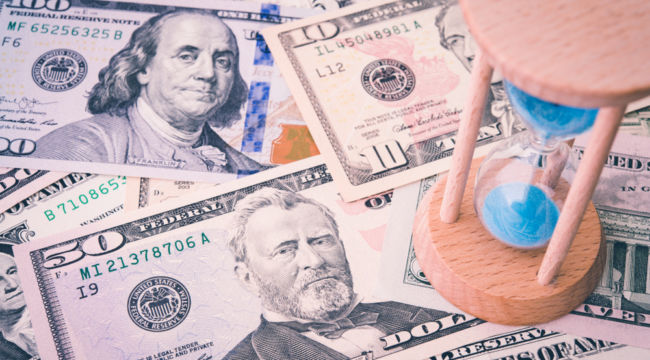 Yesterday we hauled out evidence that interest rates have gone persistently down 500 years running.

And the high interest rates of the mid- to late 20th century?

These may be history’s true aberration, a violent but brief lurch in the chart… like a sudden burst of blood pressure.

Here is an extended picture of downward-trending rates — with the fabulous exception of the mid-to-late 20th century.

Can you therefore expect the downward journey of interest rates to proceed uninterrupted?

We have ransacked the historical data further still… rooted around for clues… and emerged with worrisome findings.

Details to follow. Let us first look in on another historical oddity, worrisome in its own way — the present stock market.

A Lull on Wall Street

It was an inconsequential day on Wall Street. The Dow Jones took a very slight slip, down nine points on the day.

The S&P scratched out a single-point gain; the Nasdaq gained 12 points today.

Gold and oil largely loafed, budging barely at all.

Meantime, humanity’s would-be saviors remained huddled at Davos. There they are setting the world to rights and deciding how we must live.

But let us resume our study of time… and money.

For light, we once again resort to the good Professor Schmelzing.

The arc of interest rates bends lower with time, he has established. But as he also establishes… no line bends true across five centuries of history.

Put aside the drastic mid-to-late 20th century reversal. Even the long downturning arc has its squiggles and twists, bent in the great forges of history.

To these we now turn…

They often pivoted upon high dramas like the Black Death of the mid-14th century… the Thirty Years’ War of the 17th century… and World War II. 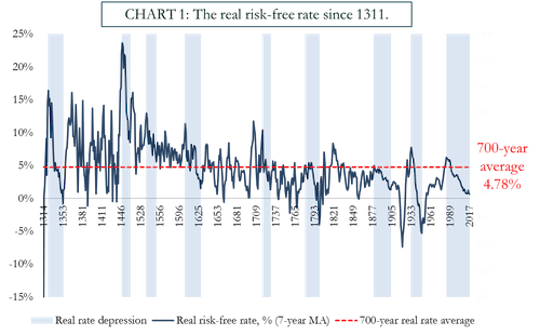 The world is currently ensnared within history’s ninth rate depression cycle. This cycle began in the mid-1980s.

Schmelzing says one previous cycle comes closest to this, our own. That is the global “Long Depression” of the 1880s and ’90s.

Need we draw the parallels to today?

It is here where our tale gathers pace… and acquires point.

A Thing of Historic Grandeur

This present cycle is a thing of historical grandeur, in both endurance and intensity.

Of the entire 700-year record… only one cycle had a greater endurance. That was in the 15th century.

And only one previous cycle — also from the same epoch — exceeded the current cycle’s intensity.

By almost any measure… today’s rate depression cycle is a thing for the ages.

Turn now to this chart. The steep downward slope on the right gives the flavor of its fevered intensity: 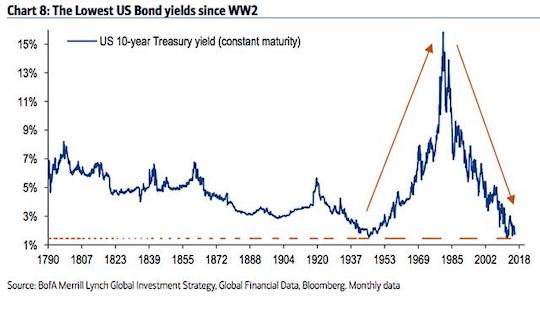 Schmelzing’s researches show the real rate for the entire 700-year history is 4.78%.

Beware “Reversion to the Mean”

And so “relative to both historical benchmarks,” says this fellow, “the current market environment thus remains severely depressed.”

That is, real rates remain well beneath historical averages.

And if the term “reversion to the mean” has anything in it, the world is in for a hard jolt when the mean reverts. Why?

Because when rates do regain their bounce — history shows — they bounce high.

Twenty-six years? The present rate depression cycle runs to 36 or 37 years. We must conclude it goes on loaned time. What happens when the loan comes due?:

It is, after all, the second longest on record… and the second most intense.

That is, we can likely expect rate appreciations of 6% or more.

What Happens When Rates Rise?

The stock market and the decade-long economic “recovery” center upon ultra-low interest rates. And so we recoil, horrified, at the prospect of a “rapid, nonlinear” rate reversal.

But CBO pays no heed to the rate depression cycle. It — in fact — projects no substantial rate increases this decade.

But what if the present rate depression cycle closes… and interest rates go spiraling?

Given the near-record intensity of the present rate depression cycle… should we not expect a similar rebound next time?

Hard logic dictates we should.

But what might bring down the curtain on the current cycle?

Perhaps a shock on their scale will close out the present cycle… for all that we know. Or perhaps some other cause entirely.

The cycle could run years yet. Or it could end Friday morning.

The Lord only knows — and He is silent.