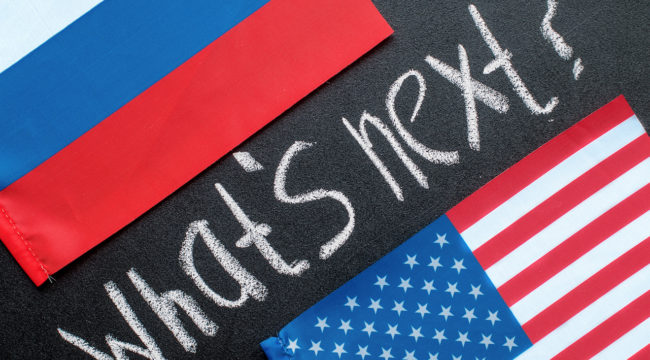 Understanding the power alliances, geopolitical positions and economic environments in 2017 between Russia and the international community could offer great opportunity behind the mainstream news cycles.

Here are the 5 reasons that Russia is positioned for fundamental change over the next twelve months. 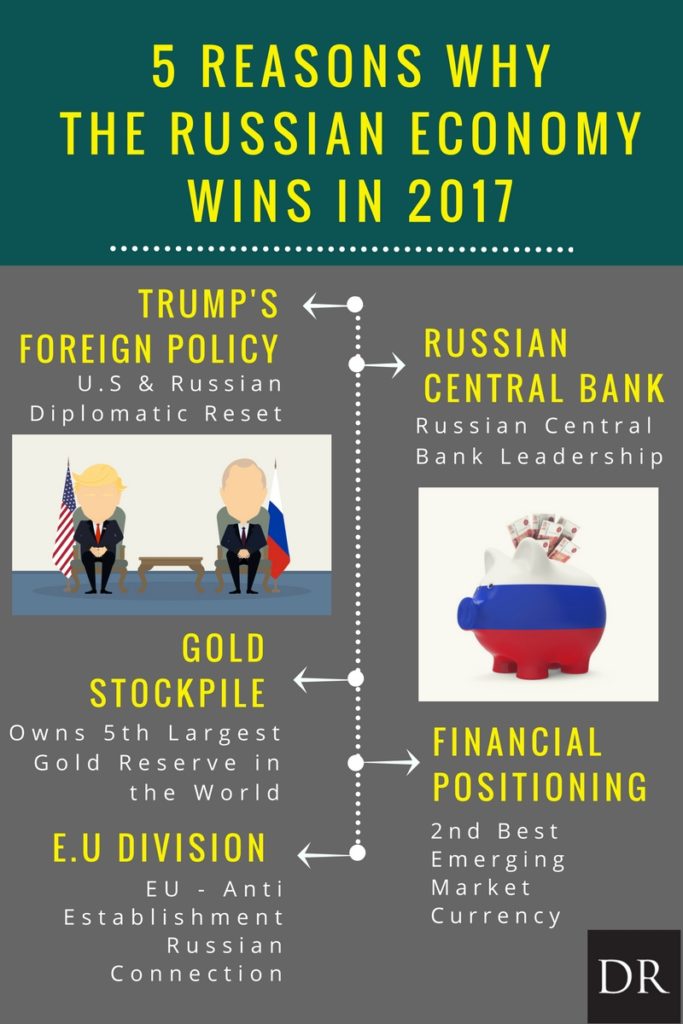 While the president-elect might be the most obvious factor, he also stands to have the greatest impact. Donald Trump has taken to drastic measures (including a barrage of Twitter praise) in order to separate his approach with U.S-Russian affairs from the former administration.  In May 2014 while speaking to the National Press Club, the same location that will host the DeploraBall, Trump indicated that he had indeed visited Moscow and had talked “indirectly and directly with President Putin, who could not have been nicer.”

The existing friction from the current White House could prove to be entering a thawing of relations for the incoming Republican leader.

In addition to Trump’s relationship with Putin, his nominee for U.S Secretary of State, Rex Tillerson has formulated a very cozy relationship with Moscow.  The former ExxonMobil chief executive was even given the Russian Order of Friendship directly from Putin.  The relationship that exists between the incoming chief diplomat, on both a business and personal basis with the Russians, offers an interesting crossroads for U.S foreign policy.

John Hamre, former deputy secretary of defense and president of the Center for Strategic and International Studies (where Tillerson is a board member) reported to the Wall Street Journal that Tillerson, “Has had more interactive time with Vladimir Putin than probably any other American with the exception of Henry Kissinger.”

Though Congress is not likely to let go of its eagerness to investigate and punish Russia for any mischief during the U.S election, this growing relationship will carry weight.  Regardless of political rank and file discussions over Russian policy, meddling and historical conflicts – the nature of the Trump administration will be much more interconnected.

The head of Russia’s central bank, Elvira Nabiullina, has just been selected as the best Central Bank Governor for Europe in 2016 by The Banker.  The financial magazine has been deemed one of the top international financial sources and is read in over 180 countries.

The publication noted the banking governor as having “helped steer the country through the difficulties,” with Russia “set to return to economic growth in 2017.”

The Banker magazine went on to establish the governors merits, “Having started 2016 with consumer price inflation of 12.9% – highs not seen since 2008 – Ms Nabiullina highlighted the need to lower inflation to improve economic growth in Russia,” with a direct dedication to the awarded distinction.  If 2016 was an influential year for Nabiullina steering the Russian economy, look for 2017 to be more of the same.

Nabiullina has been described as Putin’s “right hand woman” by The Economist and is widely considered to be one of the most influential advisers to the Russian leader.  Even Jim Rickards has noted that the the current head of the Central Bank of Russia is one of the few head bankers he has admiration for.

Oh, and did we mention that Nabiullina has been taking the lead in the Russian buildup of gold reserves?

In October, prior to the U.S election and at the height of looming Russian concern over a Hillary Clinton victory, it was reported that Russia purchased around 48 metric tonnes of gold bullion.  One gold editorial noted that, “The Russian central bank gold purchase is the biggest monthly gold purchase of this millennium.”  To put this gold buildup perspective, the Russian central bank is responsible for purchases of all domestic gold production and continues to extend its reach into the international market.

Currently, the Russian gold stockpile is larger than the People’s Bank of China, and fifth in the world after those of the U.S., Germany, France and Italy according to the World Gold Council.  That puts them in an elite category for the precious metal.

While this Russian build up of gold could be seen as just U.S election hedging from 2016 (or just Western resilience) there is much more to the story.  By the Russian central bank taking considerable steps into gold purchases, the government could be signaling a move away from large bond holdings and seeking options to diversity currency holdings.

This attempt to diversify away from foreign currency continues to be a part of the Russian policy agenda.  Prior to the 2014 Russian military incursion in Ukraine and the annexation of Crimea, the government was in formal discussion to bailout Ukraine with the equivalent of $17 billion in IMF special drawing rights, or world money. Gold offers that same alternative.

Greater financial diversity, especially in the face of waning negative sentiments around gold, could make Russia a significant powerhouse in gold reserves for years to come. With the Russian central bank pushing the cart, 2017 could be the start of even greater competition for the commodity.

Six days into 2017 and the Russian ruble has continued in its pattern of making gains against the euro and dollar.  In 2016, the ruble ended the year as the second-best performing currency amongst its peers in emerging market currencies.  Even Radio Free Europe, a U.S government-funded broadcasting organization, has cited that the ruble could be the “hottest currency of 2017.”

As economist and bestselling author Nomi Prins noted earlier this week in her financial road map for 2017, “Russia supplies nearly one-third of the EU’s natural gas, it has also begun clean energy initiatives through the BRICS development bank and other platforms, a strategic diversification. That’s why the ruble will outperform the euro and the pound sterling.”

While other emerging economic currency markets continue to be hit, Russia has built a resilient barrier despite Western economic sanctions.  During the latest retaliatory sanctions that the Obama administration imposed on the Russian government, no economic constraints were levied.  These sanctions, along with potential economic ones, are anticipated to be weakened once the new administration takes hold of the White House.

The European Union was once perceived to be pushing the edge of supranational theory and  action, from introducing the euro for a common currency to its open border system. Now a considerable right leaning shift has taken place in the continent, one in which Russia has considerable opportunity.

The Eurozone continues to be bombarded with issues related to terrorism, refugee influxes, trade and a struggling common currency.  These socio-political issues were referenced by the IMF’s 2016 World Economic Outlook to be factors contributing to a E.U slowdown and could be prospects for greater Russian involvement.  As major elections are set for 2017, specifically in France, Germany and the Netherlands, the opportunity for Russian economic and political expansion in the region could be rolled out.

Even once Russian-adversarial comedian turned leader of Italy’s Five Star Movement, Beppe Grillo, has taken his anti-establishment platform to be more “Kremlin friendly.”  This growing anti-establishment connection to Russia, or at the very least ambivalence, could open political alliances.

If the E.U continues to separate away from its de facto capital in Brussels, Moscow could certainly be positioning itself as a new force for economic influence – spreading the power shift from West to East.

While many might see the open and receptive nature of Russia as a threat to U.S positioning globally, the reality could prove to be significantly different.  David Stockman, former U.S Congressman and President Reagan’s OMB director has made it strikingly clear that America can no longer afford to play the costly game of global brinksmanship.

Stockman notes “A grand bargain with Putin’s Russia is not merely the right thing to do. It’s also the only thing to do. That’s because the US is long past the time that it can afford its global empire and neocon interventionism.”

While these five indicators that 2017 may bring a new economic horizon with the West and Russia, the political climate will be one to watch for building bridges.

Thanks for reading The Daily Reckoning,