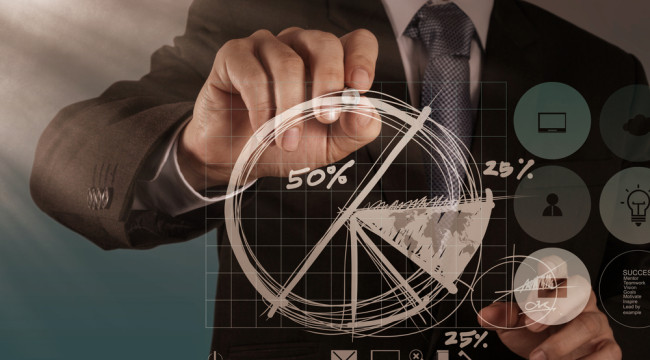 5 Financial Charts On the Move

If you watch financial news or read any of the major business newspapers, you know charts get thrown around fast. A lot of them are noise. Some of them are not. That’s why we want to begin offering you a breakdown of the charts and graphs we are keeping an eye on.

As there is more online than ever before, it’s possible for an information overload.

We want to begin bringing you 5 charts to cap off each week, along with the occasional fun add ins. These graphs will be brief in description and give you the ability to take on the news, make your own decisions and know exactly what to watch for in the future.

Let’s get the chart lines rolling…

Bloomberg reported, the U.K 10-year bonds have hit their highest level since the BREXIT vote on leaving the European Union in June. 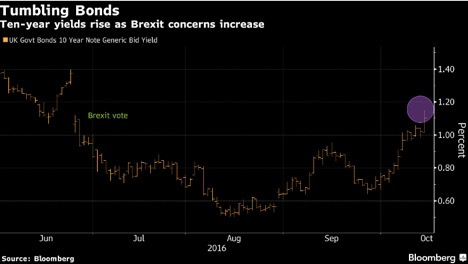 Amid British Prime Minister, Theresa May’s comments at the beginning of October, that the UK would seek to begin formal negotiations of exiting in March of 2017 the bond markets appear to be rattled.  This announcement also comes at a time when the pound is (dare we say it) taking a pounding.

The fact that the chart above shows yields rising should signal that the U.K might just be set for a true “hard landing” to come.

Maybe Breaking the Law is Bad for Deutsche Bank

Deutsche Bank, after be slapped with a $14-billion-dollar price claim by the United States Department of Justice in September, after mortgage-related fraud continues to fall.  Maybe the U.K had a heads up on the 4th largest bank in Europe, second largest in Germany – and just decided to skip town. 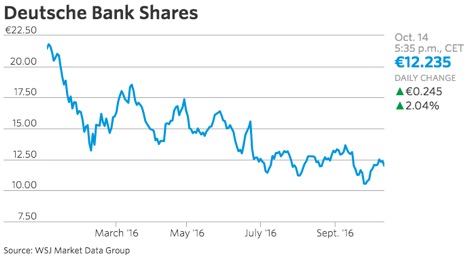 As Jenny Strasburg of the Wall Street Journal reported “The ride has been downhill: Deutsche Bank shares have fallen 45% this year and are now trading near €12. Not accounting for hedges and other factors that people familiar with the Qataris’ investment say have softened their losses, the share-price decline alone implies a hit of around €1 billion.”

This chart shows a troubling trend for Deutsche Bank, and what could be an even greater threat to the financial system.

As Brian Maher, the Daily Reckoning’s Managing Editor, noted, “Deutsche Bank may or may not be the iceberg that sinks the ship. But there are plenty others out there…”

Assets of U.S prime money market funds have dropped considerably after new Securities and Exchange Commission rules are officially enforced as of today. 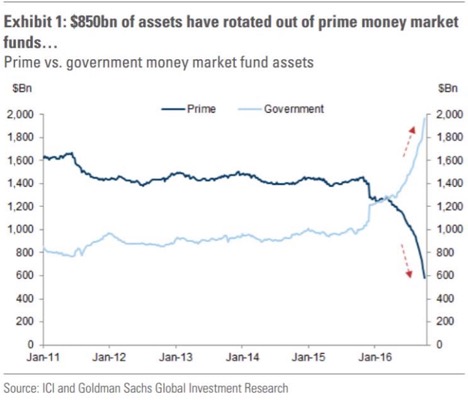 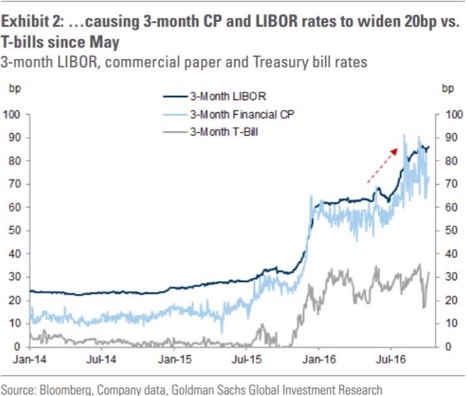 The rules are the final stage of domestic money funding reforms that were set in place following epic collapse of Lehman in 2008. You’ll remember this being discussed as the global credit crunch.  This is important because major banking institutions and cash investors used prime money funds as alternative options to that of maintaining recorded bank accounts.

These swings were expected. Hidden within the Fed’s September minutes it clearly described the situations the, “Anticipation of the impending deadline for compliance with MMF (money market fund) reform measures continued to prompt net outflows from prime MMFs and put upward pressure on some term money market rates.”

The graph should resonate with the greater economy because, asthe folks at Zero Hedge clearly wrote, “nearly $1 trillion in assets have rotated out of prime money markets into government funds.”

The University of Michigan’s released thepreliminary results of its consumer sentiment survey.  Not surprisingly, it shows that consumer sentiment is at its lowest level since last September of last year, and the second lowest reading in the past two years. 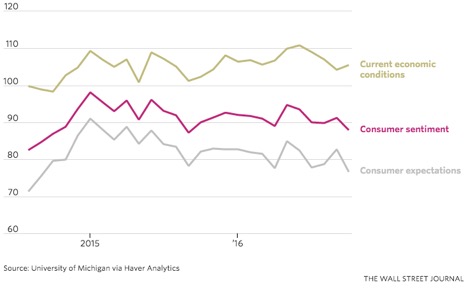 Source: University of Michigan via WSJ

Consumer spending has the biggest impact on U.S economic growth.  Any drops in this sentiment could signal slowing economic growth and even a narrowing on household spending throughout the income spectrum. 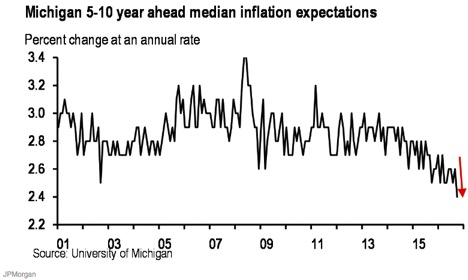 This is important because if expectations for inflation are believed to be higher in the future, Americans are likely to have a greater call to spend money currently.  These types of sentiments will, undoubtedly, be something that the Federal Reserve looks at when deciding on a potential rate hike in December.  It will also be something that the political candidates play into.

Presumably related to consumer sentiment and inflation charts featured above, gold prices have popped up to positive territory.  After a surge for the U.S dollar, gold is typically the place that markets seem to shy away from.

By the end of the second week in October, gold futures have ended on an upswing.  After a two-week downturn in October gold futures seems to have finally hit pace against the rising dollar.  On the news of Chinese exports falling, Gold saw risk aversion investors pick up.

Uncertainty, as was noted in the University of Michigan survey, tends to shy the markets back to safer seas.

While these five charts might be just the beginning to a much broader story, they leave you a step in the right direction.