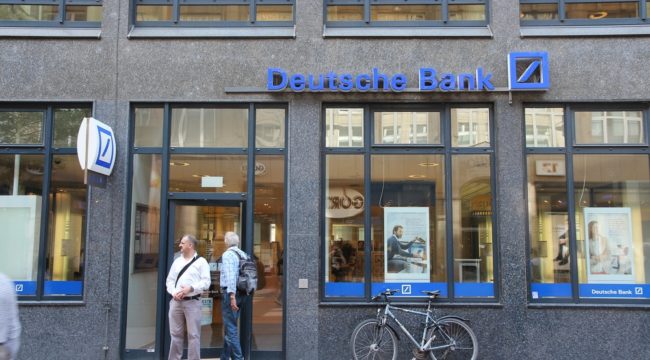 What’s the difference between a tragedy and a catastrophe, a wag once asked?

A tragedy is a ship full of bankers sinking. A catastrophe is when they can swim.

Deutsche Bank is no catastrophe, then. It can’t swim. But it could become a tragedy and sink — dragging the whole financial system to the bottom.

The potentially fatal gash below the waterline: Deutsche Bank’s $47 trillion in derivatives.

Jim Rickards says about Deutsche Bank’s role in the world: “It is difficult to overstate the importance of Deutsche Bank not only to the global economy, but also in terms of its vast web of off-balance-sheet derivatives, guarantees, trade finance and other financial obligations on five continents.”

And warns market analyst Chris Vermeulen, “A failure at Deutsche Bank will have catastrophic consequences for the banking system during 2016.”

Lehman sank, but the “too-big-to fail” banks were thrown a lifeline. Now they’re bigger than ever. And Jim Rickards says, “We’re set up for an even worse catastrophe than we had in 2008.”

We learned today that Deutsche Bank is slashing another 1,000 jobs, on top of the 3,000 it cut in June. Another straw in the wind, perhaps.

If a “Lehman moment on steroids” (Jim’s term) arrives, what does recent history teach?

Simply, but deeply, this: Own gold.

Here’s a chart of gold’s performance after the Lehman sinking: 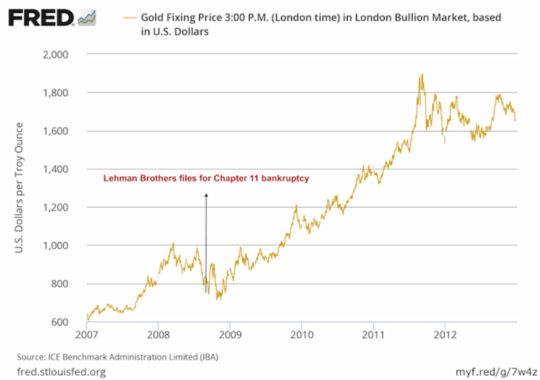 Gold dipped briefly as investors dumped assets A to Z to raise cash. But then it soared as investors sought safety from the roiling surf.

In the words of The Market Oracle:

“It is important to note how the Lehman bankruptcy and subsequent systemic, financial and economic crises showed gold’s importance as a safe haven asset and as financial insurance in a portfolio… This is an important lesson from the Lehman debacle. It is a lesson that if learned will protect investors from the coming financial, economic and likely currency crises. ”

Even a fairly limited allocation of gold could serve as “crisis insurance.” Jim recommends up to 10% of investible assets.

One difference between 2008 and the present day bodes well for gold, the safe harbor par excellence. Gillian Tett of Financial Times had this to say in 2013:

The system depends more than ever on investor faith in central banks. One issue that caused the last credit bubble was excessive investor trust in the abilities of central bankers, both to keep inflation low and understand how financial innovation worked. Logic might suggest this blind faith should have wilted after Lehman Bros. failed. Not so; these days, all manner of asset prices are now being propped up by a sunny investor belief that central bankers know what they are doing with quantitative easing; even though nobody has tried it on this scale before, or knows how to exit.

But now, in 2016, that investor belief in central banks isn’t half what it was — investors are beginning to think they’re crammed aboard the Titanic, making 20 knots straight for the berg. And they see gold as a lifeboat. Trouble is, the lifeboats will fill up fast, and there won’t be enough to go around when they need it.

Now’s the time to get gold, before the collision.

Deutsche Bank may or may not be the iceberg that sinks the ship. But there are plenty others out there…