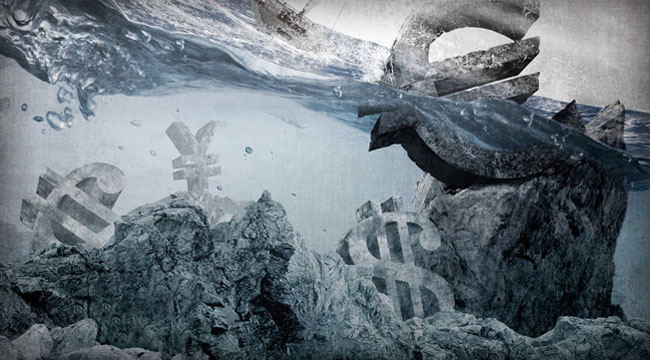 4 Experts on the Collapse of the Global Economy

If the energy boom, technology boom, and globalisation is deflationary, asked Jim Rickards, how can the US pay its debts? “Remember deflation increases the real burden of debt, so if you can’t pay them off today when can you?”

The forces of deflation are powerful, the necessity for inflation is powerful, but what will happen is a near instantaneous collapse in confidence in paper money and a flight to hard assets, he said.

Marc Faber’s diagnosis was much the same. “Inflation and deflation can co-exist, especially in a money printing environment.” For example, he argued that gold and precious metals have been in a deflationary phase, as have real wages, for the past 20 years or so. Asset prices however have been in an inflationary phase. Faber’s warning: every inflation phase will sooner or later come to an end. The question for investors is when it will happen. “We have a global festival of money printing,” he said to much laughter. “It’s going to end badly, we just don’t know when.”

Richard Duncan agreed the outlook is uncertain. “This is being managed by the government. We don’t know who the government will be five years from now,” he said, which means it’s difficult to predict what will happen.

…does the medium of exchange matter to you in the future? Does money have to be backed by a hard asset?

Jim Rickards also thinks buying up currencies is a good idea, naming the euro, Canadian dollar, Korean yuan and Singapore dollar as possible candidates. He has been a defender of the euro because it’s a de facto German currency. “The euro is the deutschmark in drag so to speak,” he said.

On the question of locking in fixed mortgage rates, Marc Faber argued that interest rates move in long cycles of 45-60 years – and with effective rates in the US at zero for last five years we have to assume we’re nearing the end of the interest rate downturn. Any interest rate rise will affect the value of assets. “I’m convinced in my life I will see the day when my asset values drops 50%,” he said.

Speaking on the uncertainty of data that underpins interest rate decision, John Robb argued economic conditions are much worse than central banks and governments are reporting. “What we’re seeing on the ground in the US is a lot more dire. Jobs are evaporating faster than they’re being replaced. That’s why so many [people] end up at retirement without any savings at all, and it’s going to get worse and worse.”

Changing gears to currencies, specifically, bitcoin… Rickards said: “Bitcoin feels like currency at this point. I don’t recommend it to investors but I’m not anti-bitcoin.”. His concern however, was that many bitcoin users are tax evaders. He argued that the US Internal Revenue Service (IRS) has been used for political purposes before – pursuing the Tea Party over tax matters, for example – and that creates a risk for people who use Bitcoin. Bitcoin has been in an upcycle since 2009, he said, and no one knew what it would be like in a down cycle.

He affirmed the importance of gold in every portfolio.

Joining the discussion, Marc Faber said: “The question should be how could you NOT own gold.” His concern about Bitcoin was how reliant it is on internet and electricity networks functioning properly, something that can’t be taken for granted in the age of digital warfare.

Gold, however, is a physical asset that performed superbly until September 2011, Faber said, and has been in a correction since then, which isn’t unusual in a money printing environment. “The fact is that gold down is a present from God and I wish it would go lower so I could buy more,” he said. The big proviso Faber added was that he had to physically own it, and said people would be ‘mad’ to own any asset in the US.

That prompted the question: does the medium of exchange matter to you in the future? Does money have to be backed by a hard asset?

John Robb answered by turning to a theme that had dominated his presentation: trust. “What we’re seeing in terms of how people interact is the importance of online reputation.” He sees a fundamental shift afoot. This will be where the online sharing economy gives primacy to permanent, online reputations maintained by buyers and sellers (think AirBnB).

Marc Faber didn’t agree, noting that the terrible reputation of bankers hasn’t harmed them. “A lousy whore will still have customers,” he added to raucous laughter.

Richard Duncan jumped in, moving the discussion back to bitcoin. “I don’t understand the point of bitcoin. If you want paper money or paper currency you have several to choose from. If you want a physical asset you have gold.”

Discussion moved to a theme that had dominated day one: China’s Economy. Is a collapse imminent?

“Chinese banks are less connected to the global system than USA and Europe so there is less risk of contagion,” said Jim Rickards. The risk may be lower but is still there – he pointed out that when the mortgage meltdown happened in the US in 2007 the Tokyo Stock Exchange dropped precipitously. Why? “When you’re in financial distress you don’t sell what you want, you dump what you can sell, which is why they dropped Japanese stocks and gold”.

Marc Faber introduced another element – how the Chinese government would respond to a weak economy or falling asset prices. In that case, he said, the Chinese could easily print more money. That would make the currency decline, and Faber isn’t sure what consequences that would have. It’s not the involvement of Chinese Banks in the global system that could cause contagion but investors who have a strong exposure in China, he said.

Richard Duncan sees China differently. “China’s economic model is in absolute crisis,” he said. “With the US in crisis, and Japan and Europe, there’s no one else left for China to keep exporting to. So if exports aren’t growing why would they keep investing in factories? What’s going to drive China’s economy?” He argued that bank loans have been driving the Chinese economy and to survive the impending crisis, China will have to do what Japan has been doing: run up massive government debt.

That may avert a depression but in his view, China won’t grow anywhere near 7% a year.

John Robb’s view: China, like other emerging economies, is in an arms race with technology for middle class jobs. Technology, he believes, will win, which will deny billions of people entry to the middle class.

Then, on to talk of liberty – are we effectively living in a police state?

The thing about liberty, observed Jim Rickards, is that once you notice it slipping away, those that have taken it won’t give it back. “If you pass enough laws everyone is a criminal. This is modern neo-Fascism, and it’s coming your way,” he added, to applause from the audience.

Marc Faber ended by noting that those who benefit most from regulation are established corporate players, at the expense of small business and individuals. Large corporations can afford to keep teams of expensive lawyers on staff, allowing them to minimise their own taxes and twist regulation in their favour in ways that their start-up rivals can’t. “The corporate establishment love regulation because it keeps the opposition away” he said.

Callum Denness
for The Daily Reckoning

Ed. Note: All this week, Daily Reckoning email readers had an opportunity to “sit in” on the World War D conference, with up-to-the-minute coverage from Managing Editor Peter Coyne. But that’s just one small benefit of being a subscriber to the FREE Daily Reckoning email edition… In addition, readers are also treated to no less than 3 specific chances to discover investment opportunities with unbelievable profit potential. Sign up for FREE, right here, to see what all the buzz is about.

Callum Denness is a contributing author for Money Morning Australia. He covered the 2014 World War D conference in Melbourne as their Roving Reporter.